A new foreign policy strategy document released by Russia includes a comprehensive section on the Middle East — but will there be a shift in Moscow’s priorities in the region? 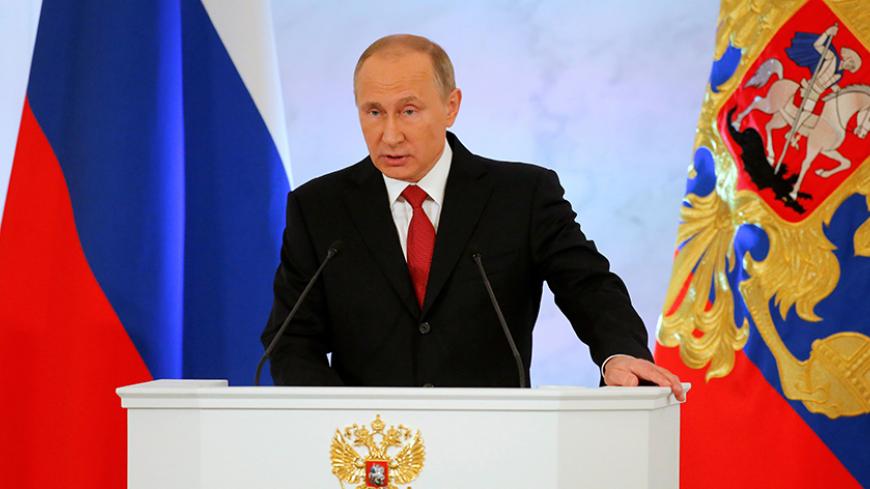 Russian President Vladimir Putin delivers a speech during his annual state of the nation address at the Kremlin in Moscow, Russia, Dec. 1, 2016. - REUTERS/Maxim Shemetov

On Dec. 1, Vladimir Putin delivered his annual address to the Federal Assembly — Russia’s analogue to the State of the Union. In his 13th 70-minute address as president of Russia, Putin focused primarily on domestic matters — the economy and social issues in particular — with only about seven minutes dedicated to foreign policy issues.

The main message reflected the conjunction of “firmness and flexibility” that is characteristic of his speeches: “We aren’t seeking a confrontation with anyone. We aren’t seeking enemies, we need friends. But we will not allow our own interests to be neglected either.” He continued, “We understand the measure of our responsibility and are genuinely prepared to take part in solving global and regional problems where our participation is relevant, demanded and needed.”

Later that day, Russia’s new foreign policy strategy was publicized. In fact, the document, officially titled “Foreign policy concept of the Russian Federation,” was signed by Putin Nov. 30 — one day before his annual address — but few people, even those who worked on it, saw the final version of the text before it was officially released.

Unlike the previous foreign policy strategy of 2013, the new version is more “tough” — both stylistically and contentwise. It has a tangible emphasis on countering threats, and focuses on security-related matters. Among its top priorities are “providing security [to] the country, its sovereignty and territorial integrity” and “strengthening Russia’s position as one of the most influential centers of the contemporary world." This thesis is clearly not brand-new: Russia has been operating in this paradigm for quite a while. Yet it gives important insight into the perception the Russian elites have of the modern world. The world is seen as increasingly turbulent, competitive and by and large unfriendly. The suggested foreign policy toolbox demonstrates the Kremlin’s tenacity to move forward coming out of these perceptions.

The priorities for Moscow haven’t changed that much in terms of the Middle East. Post-Soviet space with an eye on further development of the Eurasian Economic Union and strengthening defense institutions — namely the Collective Security Treaty Organization — is still the main priority, followed by relations with Europe in all of its incarnations — at the bilateral level, with the European Union, the Organization for Security and Co-operation in Europe and NATO. The Middle East is mentioned after relations with the United States, the Arctic, states of the Asia-Pacific region and the Association of Southeast Asian Nations, and precedes only Latin America. Yet it should not be misleading in defining its significance for Russia.

In the first out of five comprehensive paragraphs devoted to the Middle East, Moscow states it will continue “to contribute to the stability of the MENA region … to maintain focus on politico-diplomatic settlement of conflicts,” including the Arab-Israeli one through the Quartet on the Middle East. Syria and Iran are singled out in two separate paragraphs, giving both a special place in the Russian regional strategy. Moscow reaffirmed its commitment to the “unity, independence and territorial integrity” of Syria as “a secular, democratic and pluralistic state,” where all ethnic groups and religious denominations will live “in peace and security and enjoy equal rights and opportunities.” This wording gives a sense of what the Kremlin is looking for at the end of the day, and what its starting negotiation position will be once the “fighting phase” is over.

It is also designed to annul allegations that Russia is considering the partition of Syria — even though such a posture does not technically prevent Moscow from advocating for a federalization if such an option is ever on the table. As for Iran, the Kremlin seeks to continue to develop a “comprehensive cooperation” with Tehran and hopes its nuclear program will be managed “on the basis of UN Security Council Resolution 2231 and other respective procedures of the International Atomic Energy Agency” — all to avoid a foreign military interference against the Islamic Republic.

Third, Russia is seeking to increase its activity through various institutional frameworks: engaging Arab states through the existing Russia-Arab Cooperation Forum, reaching out “for a strategic dialogue” with the Gulf Cooperation Council and “expanding reciprocity and developing partnerships” with the broader Muslim world through its observer status in the Organization for Islamic Cooperation.

Securitywise, there are enough grounds to presume that the Middle East will be paid more attention to. In the second chapter of the strategy titled “Contemporary world and Russia’s foreign policy,” Moscow insists on the concept of “united and undivided security” and denounces rigid institutional structures as ineffective: “Existing military-political alliances aren’t able to counter all of the contemporary threats and challenges. Today, when the interdependency between peoples and states has significantly increased, any attempts to provide security and stability on a separate territory are futureless.” Therefore, the trend of Russia’s foreign policy to forge ad hoc regional and cross-regional alliances will be maintained and frequently referred to whenever Moscow feels it meets its interests.

Another critical area where the Middle East will definitely be on Russia’s radar is everything that has to do with terrorism. The rising threat of international terrorism runs like a scarlet thread through the text — in the “Strengthening international security” chapter alone, 10 paragraphs are dedicated exclusively to Russia’s own policies to combating this phenomenon. In the “Russia’s priorities in solving global problems” chapter, a big chunk of the text focuses on digital threats and the necessity of countering “terrorist and criminal threats” on the internet. Terrorism is called “one of the most dangerous realities of the modern world,” while the prime sources of the spread of this phenomenon in the Middle East, according to Moscow’s vision, are “systemic development problems [of the region] exposed by globalization” and “foreign interference” that both have led to “the destruction of traditional mechanisms of state governance … and illegal spread of arms.”

The new foreign policy strategy of Russia sees this as a prerequisite to the current chaos in the Middle East: “Extremist forces jumped on these trends using a distorted interpretation of religious values and calling for violence to reach their own goals in political, international and inter-religious rivalries.”

For Moscow, the subsequent rise of the Islamic State and "similar groups" represents “a qualitatively new character of the global terrorist threat.” In the eyes of the Kremlin, it is “the creation of a broad international anti-terrorist coalition on a solid legal basis … without politization and double standards” that should be the main direction in the fight against terrorism — the idea first announced by Putin a year ago at the UN General Assembly days before Russia’s campaign in Syria began. For Putin, whose own rise to power was largely possible due to successes in countering jihadis in the North Caucasus back in the late 1990s and early 2000s, the fight against international terrorism is something deeply ingrained in his political psychology; he genuinely believes that this is a real threat to unite against, including with the new US administration.

“US-Russia cooperation is in the interests of the entire world. We bear common responsibility in providing international security and stability. … We count on the United States to cooperate against a real and not an imagined threat — international terrorism,” Putin noted during his address to the Federal Assembly. The remarks, as well as Moscow’s hope to eventually have such cooperation with Washington, should be seen as a third call to the United States for an anti-terrorism cooperation effort. Two previous attempts to start such cooperation — soon after the 9/11 atrocities in 2001 and the Boston marathon bombing in 2013 — have borne little fruit.