Iran’s Khamenei has three main messages for Putin at summit

Tehran wants to strengthen existing ties with Russia and develop new areas of cooperation while isolating the United States at the same time. 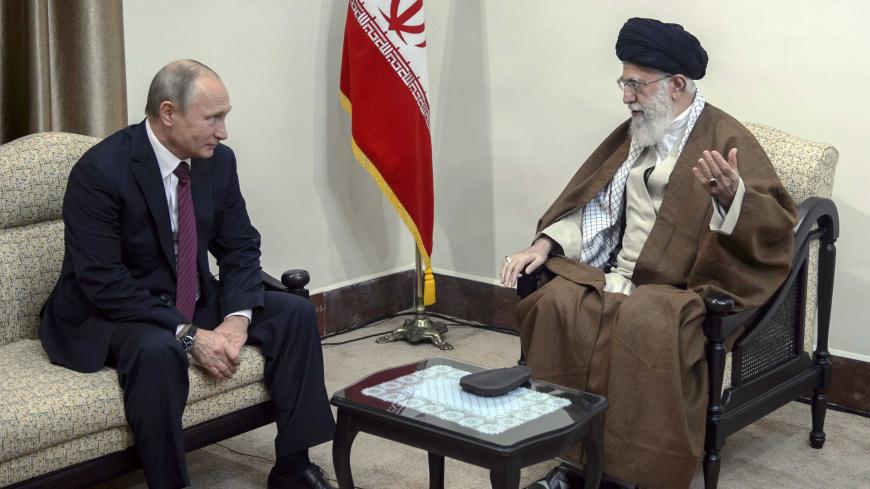 This is Putin’s third visit to Iran — the last time being November 2015, two months after the start of Russia’s military campaign in Syria.

Although this time the issue of energy cooperation was central at the trilateral meeting, it was Putin’s discussions of Syria with Khamenei and Rouhani that for many outside observers was the most intriguing part of the talks.

Over the course of the Syrian war, Russia and Iran have been crucial to one another both politically and on the ground, with intelligence sharing and the number of military contacts unprecedented in the modern history of the two countries. Yet Moscow and Tehran don’t always share similar views on the future composition of Syria’s government, the role of the Kurds, the fate of President Bashar al-Assad or the tacit rivalry for control over mineral resources in some parts of the country. Top all of that off with the deep-seated historic distrust fueled every time Russia is in contact with any of Iran’s archenemies — Israel, Saudi Arabia or the United States — or works with the Syrian opposition outside the framework of the Astana peace talks.

Indeed, there are concerns in Moscow and Tehran that — as the active phase in the war against radical Islamists comes to an end and Syria’s opposition forces are being engaged through a number of political platforms — this gap between Russian and Iranian approaches stemming from different interests may grow. The concerns are serious, and each party is having its own internal debate about how to not end up playing the fool for its efforts. But both sides believes the marriage of convenience — born of the need to cooperate against common threats in Syria — needs to be maintained. Both recognize too well that there are many opponents inside Russia and Iran, and even more regionally and internationally, who seek every opportunity to drive a wedge between Russians and Iranians regarding Syria.

Although it seems each party would rather establish the agenda for the other rather than find mutually beneficial solutions, the bottom line for both is clear: Russia and Iran need each other. In fact, both Putin, in his remarks with Rouhani, and Khamenei, in his remarks to the Russian president, have echoed this idea.

Speaking at the final press conference of the summit, Rouhani said, “Our cooperation has helped the fight against terrorism in the region. … Together we can establish regional peace and security.”

Putin reiterated the assessment, saying regional security, Iran’s nuclear program and the situation in Syria were discussed “in detail.”

“There are plenty of issues, and none of them can be resolved unilaterally. No one side, no one country can resolve this problem on its own. We are hoping for further productive cooperation with our Iranian partners and friends, and I give high marks to the results of today’s visit,” he added.

Khamenei, who had hosted Putin a few hours before these statements were made, had a similar statement for the Russian president but with a somewhat different twist, putting the Russian-Iranian relationship into a more global context. “Our cooperation can isolate America. … The failure of US-backed terrorists in Syria cannot be denied, but Americans continue their plots,” said Khamenei.

“Therefore, settling the crisis in Syria needs our continued close cooperation. … We are able to counter US sanctions and isolate America by refusing to use the dollar and instead using our national currencies in bilateral and multilateral [financial] operations,” he added.

Khamenei’s statement is meant to convey at least three messages to the Russian president.

First, Iranians don’t see the war in Syria as being over or even coming to end. This is an important point, given the Russian military’s repeated statements that its operation in Syria is “coming to a conclusion” and the rumors that Russian air forces in the country will soon begin a gradual drawdown. Earlier, Russia’s well-wired Kommersant newspaper referenced its own sources in the Russian Defense Ministry, saying Moscow is considering a partial pullout of its military jets, helicopters, and engineering and technical personnel. Anti-aircraft defense systems and enough of a contingent to protect Russian military objects in Khmeimim and Tartus will remain, together with military police units and military advisers.

A drawdown would suggest Moscow would shift focus from military operations to finding a political settlement in Syria. Commenting on the Kommersant news, Kremlin spokesperson Dmitry Peskov denied any concrete decision has been made on a drawdown and said, “The last word rests with the commander-in-chief.”

Second, Khamenei wants Putin to stay alert regarding the United States. On one hand, that reflects Tehran’s concern over the possibility of a deal between Moscow and Washington that would be detrimental to Iranian interests in Syria and Iraq. On the other hand, it alludes to Iran’s own readiness for a worst-case scenario in which the United States can come up with policies obstructing — militarily or politically — Russian and Iranian gains.

Tehran sees the Donald Trump administration as seeking to comprehensively counter Iranian policies in the region, so there’s no doubt in Iran that the United States will never agree to Iran’s growing influence in the region in any form. Decertification of the Joint Comprehensive Plan of Action in this respect is just a part of the strategy, Tehran believes.

This perception is closely associated with what seems to be Khamenei's third message to Putin: Russia and Iran need to deepen their cooperation at other levels. Khamenei praised Putin for being a “strong and responsible leader” and said Russia is a country “with which you can have dialogue and cooperation.” The assessment certainly doesn’t mean Khamenei and the rest of the Iranian leadership aren’t wary of Moscow’s military deals with the Saudis and Turks, its energy interests in Iraqi Kurdistan and its willingness to maintain coordination with Israel and the United States. Yet there seems to be a broader understanding in Iran and Russia that befriending each other on the basis of anti-Americanism doesn’t make for a strategic partnership. Instead, deepening ties into other spheres would make a partnership more sustainable in the long term. In transforming this understanding into real initiatives, cooperation on energy, trade and macro-level investments will be key and will take a great deal of time, resources and political will from both sides.