Putin, Khamenei agree they need each other

Iran and Russia deepen energy cooperation; Iran has Hezbollah’s back; does the CIA have a back channel to Assad? 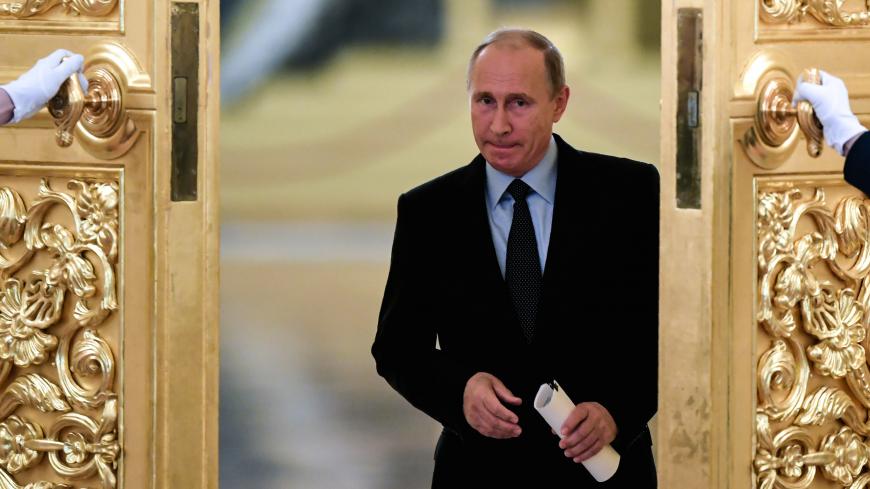 Russian President Vladimir Putin enters a hall to meet with members of the Presidential Council for Civil Society and Human Rights at the Kremlin in Moscow, Oct. 30, 2017. - REUTERS/Kirill Kudryavtsev

We wrote here in July that absent relief from US sanctions, Russian President Vladimir Putin would forge his own path in the Middle East by carefully working with and through regional powers, especially Iran.

So perhaps it is no surprise that when Putin met with Iran's Supreme Leader Ayatollah Ali Khamenei on Nov. 1, there seemed to be a meeting of the minds on regional developments, especially regarding Syria and Iraq, as well as agreement to deepening economic cooperation in many fields, including energy.

Putin continued his surge of regional energy diplomacy while in Tehran, following up on his reset in Iraq, as we reported last week. During Putin’s visit to Tehran, Russia and Iran agreed to “strategic” energy deals worth as much as $30 billion for development of Iran’s oil and gas fields, as well as research collaboration. With the agreement, Rosneft and Gazprom, the Russian energy giants, put themselves ahead of potential Western suitors in Iran. If the United States reimposes sanctions on Iran, Russian and Chinese energy companies are best positioned to run the field in meeting Iran’s substantial energy investment needs.

This is not to say that Iran and Russia are in lockstep on Syria, as we have reported here before. “There are concerns in Moscow and Tehran that — as the active phase in the war against radical Islamists comes to an end and Syria’s opposition forces are being engaged through a number of political platforms — this gap between Russian and Iranian approaches stemming from different interests may grow,” as Maxim Suchkov reports.

For example, Russia would prefer to reduce its military commitment and move to a political solution, while “Iranians don’t see the war in Syria as being over or even coming to end.” And despite the bravado from Iran, “Khamenei wants Putin to stay alert regarding the United States. On the one hand, that reflects Tehran’s concern over the possibility of a deal between Moscow and Washington that would be detrimental to Iranian interests in Syria and Iraq. On the other hand, it alludes to Iran’s own readiness for a worst-case scenario in which the United States can come up with policies obstructing — militarily or politically — Russian and Iranian gains.”

“The concerns are serious, and each party is having its own internal debate about how to not end up playing the fool for its efforts,” Suchkov continues. “Both recognize too well that there are many opponents inside Russia and Iran, and even more regionally and internationally, who seek every opportunity to drive a wedge between Russians and Iranians regarding Syria." He also wrote that "there seems to be a broader understanding in Iran and Russia that befriending each other on the basis of anti-Americanism doesn’t make for a strategic partnership. Instead, deepening ties into other spheres would make a partnership more sustainable in the long term. In transforming this understanding into real initiatives, cooperation on energy, trade and macro-level investments will be key and will take a great deal of time, resources and political will from both sides.”

Iran is benefiting from the defeat of the Islamic State, shifting from its “mostly low-profile strategy as they [Iranians] were filling the vacuums in both Syria and Iraq” to a more assertive regional posture to consolidate its gains, Ali Hashem reports from Tehran.

“Tehran proved its keenness to cooperate with neighbors and put out the message that it has no intention to dominate their areas of influence,” Hashem writes. “But after the tide turned against the Islamic State (IS) in Syria and Iraq, Iran's rhetoric changed. … The breakthrough on the Iraq-Syria border was followed by the entrance of the Popular Mobilization Units (PMU) into Mosul, Iraq, with Iraqi security forces. The move gave Iran a strong confidence boost because, although the PMU forces belong to Iraq, they are supported by and loyal to Iran, and the PMU wasn't on the US list of forces allowed to enter the conflict-torn city. Yet the real confidence booster was the outcome of the Iranian-Turkish role in the crises that followed the Sept. 25 independence referendum in Iraqi Kurdistan. To Tehran, finding solutions to such a big dilemma without the involvement of countries outside the region was more proof that the region is capable of managing its issues independently. That's another reason many in Tehran anticipate a new US effort designed to dismantle Iran’s regional power.”

Iran’s commitment to Hezbollah, therefore, takes on even greater weight. “Anyone attempting to hit or neutralize Hezbollah and the PMU is trying to clip the Islamic Republic’s wings, and thus undermine its strategic depth,” Hashem concludes. “Iran is unlikely to retreat if it perceives a threat to the regional leverage it currently enjoys and has been building for the past three decades. Rather, it is probable that it would respond with confrontation — though it’s not yet clear how or when such a confrontation might unfold.”

No comment on report of US back channel to Assad

“Feel free to say we declined to comment,” a CIA press officer responded last week when asked by Al-Monitor about reports that a US official had met in Damascus with security chief Ali Mamlouk, writes Laura Rozen.

“CIA director Mike Pompeo was previously reported to have started a back channel with Mamlouk shortly after taking office last January with the alleged purpose of seeking the release of American journalist Austin Tice. Tice, a former Marine, was abducted while working as a freelance reporter in Syria in August 2012 and is believed to be held by forces loyal to Assad. … Syrian officials have repeatedly denied that Tice is being held in Syria,” Rozen reports.

“The conspicuous lack of denials suggests that the United States might be pursuing discreet, back-channel talks with Damascus with the purpose of gaining the release of American citizens. Such talks could also be useful to directly communicate US security concerns as advances against the so-called Islamic State (IS) put US-backed forces in close proximity to Russian- and Iranian-backed Syrian forces on the ground, and as the United States tries to ensure that Iran does not set up a presence on Syrian territory close to Israel, analysts said,” adds Rozen.