Washington silent on report US official went to Damascus

The CIA declined to comment on a report that a US official went to Damascus this week to discuss US citizens believed detained in Syria. 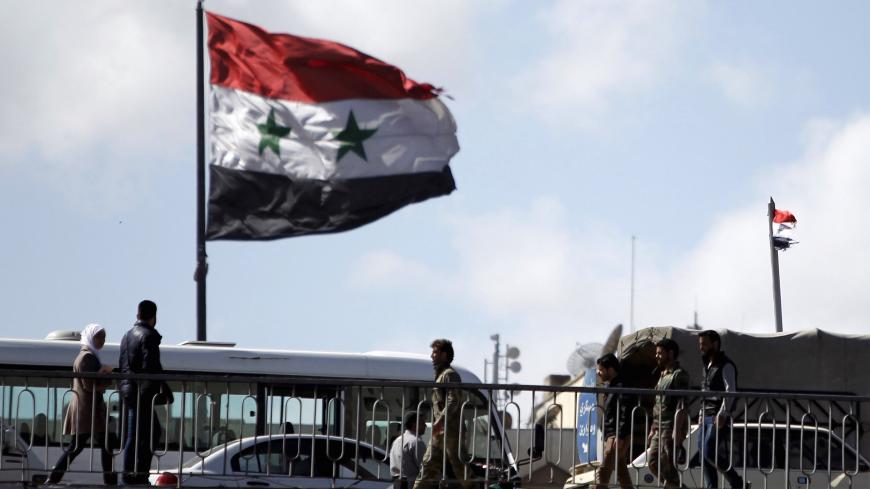 WASHINGTON — The CIA and the Czech diplomats serving as the US protecting power in Syria declined to comment Friday on a report that a US official had gone to Damascus, Syria, this week to talk with Syrian security chief Ali Mamlouk about security concerns, including American citizens believed detained in Syria.

The conspicuous lack of denials suggests that the United States might be pursuing discreet, back-channel talks with Damascus with the purpose of gaining the release of American citizens. Such talks could also be useful to directly communicate US security concerns as advances against the so-called Islamic State (IS) put US-backed forces in close proximity to Russian- and Iranian-backed Syrian forces on the ground, and as the United States tries to ensure that Iran does not set up a presence on Syrian territory close to Israel, analysts said.

“There are a range of issues that are outstanding between the US and the Syrian governments, including the fate of US prisoners the United States believes are being held under Damascus’ authority,” Nicholas Heras, a military analyst with the Center for a New American Security, told Al-Monitor after stressing that he has no direct knowledge if the reported US official visit to Damascus took place.

Direct talks would also be useful “to get a sense directly from the lion’s den itself what are the intentions of the [Bashar al-] Assad government toward the future of eastern Syria as the counter-IS campaign winds down and US-backed forces and Assad-backed forces come directly face to face, staring at each other,” Heras said. “And also potential future regime moves into areas of Syria such as in the southwest that are of high concern to key US allies such as Israel and Jordan.”

“A senior US official met Syria’s national security chief in Damascus this week in the highest-ranking visit to Syria by a US official since the start of the war in 2011,” Reuters reported it was told by a senior regional official close to Damascus Nov. 3, after Lebanese newspaper Al-Akhbar first reported on the alleged visit.

“We can’t comment on this matter,” a Czech diplomat also told Al-Monitor Nov. 3.

A State Department official told Al-Monitor that the department had no information on the reported visit.

The regional security official did not name the US official who allegedly met with Mamlouk, but said he had traveled to Damascus from Lebanon, Reuters reported.

CIA director Mike Pompeo was previously reported to have started a back channel with Mamlouk shortly after taking office last January with the alleged purpose of seeking the release of American journalist Austin Tice. Tice, a former Marine, was abducted while working as a freelance reporter in Syria in August 2012 and is believed to be held by forces loyal to Assad.

Syrian officials have repeatedly denied that Tice is being held in Syria.

“Austin Tice is not in the hands of Syrian authorities, and we don’t have any information about him at all,” Syrian Deputy Foreign Minister Faisal Mekdad told the Associated Press in an April 2016 interview.

The Reuters report Friday said that there are other US citizens detained in Syria, including CIA operatives. Diplomatic sources have previously told Al-Monitor there are other cases of Americans being held in Syria, beyond Tice, but did not share their names.

One former senior US official expressed caution about some of the details in the report. “I'm not sure why you would do this meeting in Damascus,” the former senior US official, speaking not for attribution, said. “Too risky. Would only happen on the third or fourth meeting if I had to guess, and even then there would be little reason to do it there and lots of reasons not to.” He suggested it would make more sense for such a meeting to take place in Beirut.

If the United States did send an official to Damascus, it was not with a message of rapprochement, although Syria may try to suggest that is the case, analysts said.

“This type of communication is intended to be episodic,” Heras said. “What it really does that is useful for the US side is it cuts out the middleman, such as Russia, and allows the United States to communicate directly with relevant Syrian government agencies that have an ability to tap into the highest levels of decision-making in Damascus.”

“This also allows the United States to directly say to the face of the regime that it won’t accept aggressive actions toward US partners like Israel, which is a major source of concern in Washington,” Heras said. “And it also sends a signal to Tehran and Moscow that, when it needs to, the United States does not have to rely on them to say what it needs to say to Assad.”

“The United States and the [Donald] Trump administration continue to say they are not actively looking to overthrow Assad by force, but they do not see a future Syria with Assad in power,” Heras said. “It also is not a sign of rapprochement, because the United States is trying very hard to create the conditions for the war over the aftermath of the war, which is to prevent Assad and his partners from having access to reconstruction funds and the international organizations it needs to underwrite the future reconstruction of the areas it controls.”

“The United States wants a whole and unified Syria with no role for Bashar al-Assad in the government,” Secretary of State Rex Tillerson told journalists in Geneva after meeting with UN Syria envoy Staffan de Mistura in Geneva last week. “The reign of the Assad family is coming to an end. The only issue is how that should be brought about.”

De Mistura has called for the next round of Syrian political talks between the regime and opposition to be held in Geneva on Nov. 28.

The United States and European allies have been cool to a Russian proposal to host a “Congress of Syrian National Dialogue” in the Black Sea city of Sochi on Nov. 18, and Syrian opposition groups have said they will not attend.

“With respect to the conference the Russians are pushing, the United States continues to support efforts by the UN and the Geneva process … to undertake a political process with international legitimacy that can end the Syrian conflict,” a State Department official told Al-Monitor Nov. 3.

"The road to peace lies through Geneva," British Ambassador to the UN Matthew Rycroft said Thursday.

"Now we are told that the road, which has already taken a significant detour into Astana, now needs another detour into Sochi,” Rycroft said. “I'm relatively skeptical about that.”