An American psychotherapist's family is more worried than ever about the dual US-Syrian citizen who disappeared in Damascus in 2017 as a potential coronavirus outbreak looms over Syria’s prisons. 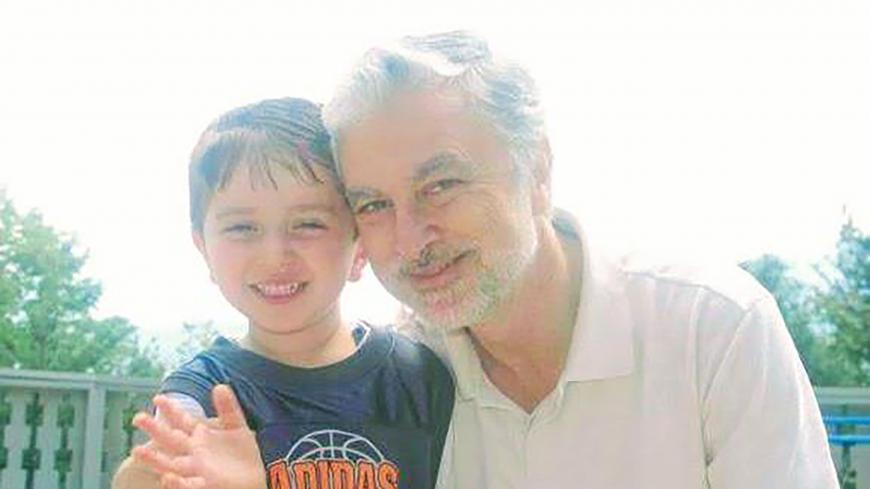 The family of Majd Kamalmaz, an American psychotherapist who disappeared in Damascus in 2017, says their missing patriarch has been moved to an unknown location inside Syria.

“We sent back some of the connections we have to locate him and see how he’s doing, and they weren’t able to find him,” said Maryam Kamalmaz, one of his five children. “That made us very concerned.”

Before they lost track of his whereabouts, she told Al-Monitor, their sources in Syria had confirmed Kamalmaz was held in a prison.

“We tried asking around a little bit more and it seems that he has moved, and nobody knows where the new location is,” said Maryam.

The family recently marked the third anniversary of Kamalmaz’ disappearance in Syria. In February 2017, Kamalmaz traveled there from neighboring Lebanon to visit relatives after a death in the family. The next day he was detained at a checkpoint in a Damascus suburb and the dual US-Syrian citizen has been missing ever since.

Now, the potential for a coronavirus outbreak in Syria’s prisons has Kamalmaz’ children even more worried for their father, a 62-year-old with diabetes and other health concerns.

Although the Syrian Ministry of Health maintains there are zero cases of coronavirus in government-held areas, Syria’s neighbors have each reported their own outbreaks and the World Health Organization assesses the risk to Syria as “very high.”

If the virus reaches Syria’s vast network of detention facilities, known for their systematic use of torture and mass executions, it’s unlikely much could or would be done for the infected.

“The regime is definitely not able to do anything for coronavirus in prison — even if they wanted,” said Omar al-Shogre, a former prisoner who now serves as the director of detainee issues at the Syrian Emergency Task Force, a nonprofit based in Washington, DC.

“They would have to isolate every prisoner,” al-Shogre said. “You have at least 250,000 prisoners. There are no rooms for that.”

Citing concerns the coronavirus would spread in its jails, Iran has temporarily released or pardoned some 95,000 prisoners, including detained American Michael White. In a coronavirus press briefing at the White House Wednesday, President Donald Trump noted his success in freeing Americans seized abroad and called on the Syrian regime to release Austin Tice, a freelance journalist who disappeared while covering the country’s civil war in 2012.

Kamalmaz and Tice are among a handful of Americans thought to be held in Syrian government prisons. The FBI’s Hostage Recovery Fusion Cell — a multi-agency team established in the wake of the Islamic State executing American hostages — is coordinating with the Office of the Special Presidential Envoy for Hostage Affairs and other government agencies to secure the release of US citizens wrongfully detained overseas.

The main obstacle to bringing Americans home from Syria, experts and family members say, is the lack of an open dialogue between the two governments. Robert Ford, who served as US ambassador to Syria from 2011 to 2014, said simply talking with the Syrians is a challenge.

“I think if we just ask the Syrian government politely, we will get a polite response back that they know nothing about the American in custody or they will politely tell us that the person in custody has been convicted of some offense by the allegedly independent Syrian court,” he said.

Through its ambassador in Damascus, the Czech Republic has served as the protecting power for American interests in Syria since the United States closed its embassy there in 2012. In her role as an intermediary between the two governments, the Czech ambassador in Syria, Eva Filipi, initially confirmed that Kamalmaz had been detained by the regime. But the Syrian government later claimed otherwise and Filipi stopped communicating directly with the Kamalmaz family.

Even if the United States were to reach the Syrian government via the Czechs or another go-between, Ford, now a senior fellow at Yale University and the Middle East Institute, says the United States has limited leverage with which it can negotiate the release of imprisoned Americans.

“This will have to be transactional,” he said. “The Syrian government is not going to make any gestures to the United States to make us feel better.”

Maryam said her family has asked US officials to engage with their Syrian counterparts in “some kind of direct and real discussion” about their father.

The US State Department declined to discuss specifics of Kamalmaz’ case, but a spokesperson told Al-Monitor in an emailed statement that the US government is in frequent contact with the family to provide information and support.

“Majd’s case, along with all of our US citizens missing or wrongfully detained in Syria, has the attention of the highest levels in the US government,” the spokesperson added.

Before he disappeared, Kamalmaz traveled around the world helping victims of war and natural disasters in places like Indonesia following the 2004 tsunami and New Orleans after Hurricane Katrina. As a psychotherapist, he worked with refugee communities using a stress management method known as HeartMath.

When the war broke out in Syria, he looked for ways to address the mental health crisis among Syrians displaced to neighboring countries. Prior to his disappearance, Kamalmaz was developing a program for elderly refugees in Lebanon.

“He’s helped so many,” Maryam said. “We’re requesting now for anybody that could help us to step forward.”