Iran unlikely to sit idle as US targets Hezbollah, PMU

Tehran views US actions against Iran's friends in the region as nothing short of a plot to sabotage the republic's strength and restrict its area of influence. 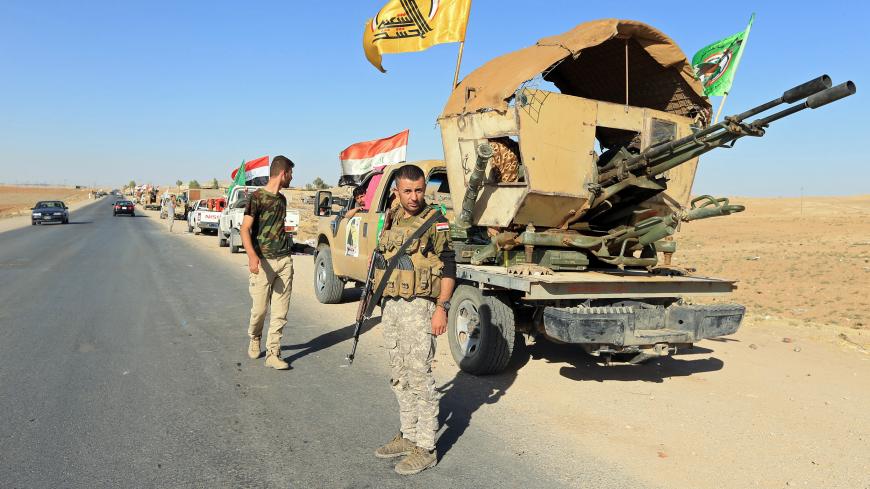 TEHRAN, Iran — The diplomacy of smiles between the United States and Iran has come to an end. Not even regular old diplomacy seems to be an option anymore, with US President Donald Trump clearly stressing the importance of countering what he calls the Iranian regime's "destabilizing activity and support for terrorist proxies in the region.”

Trump took things back to square one, undoing the path that was paved during two years of marathon negotiations between diplomats and experts from Iran, the United States and the other world powers that negotiated the Joint Comprehensive Plan of Action in different venues around the world. The nuclear deal, struck in July 2015, was seen as a required step before there could be any cooperation between Tehran and Washington on regional crises, mainly Syria and Iraq.

The possible collapse of the deal and the new US strategy on Iran is expected to raise the level of regional tensions, given the blatant hostility between Iran on one side, and the United States and its main regional partners on the other. This alone should elicit concern over precarious possibilities on several fronts, mainly in Iraq, Yemen, Syria and Lebanon — countries of continuous political and military tensions. To Iran, it’s clear Trump is mainly cooperating with Saudi Arabia and Israel in efforts to stop the Islamic Republic of Iran from making gains in the Middle East.

The United States and its partners "are straining to find a way out of their failures,” a source within the Islamic Revolutionary Guard Corps (IRGC) told Al-Monitor on condition of anonymity. “In Syria and Iraq, it’s Iran with the upper hand, despite what they try to say and portray.”

He added, “In Yemen, Saudi Arabia is in very bad shape and the war there is becoming an international scandal. Israel, too, knows well what’s waiting for her in case she tries to [interfere] with Hezbollah on both the Lebanese and Syria borders." He concluded, “So it’s more like [a suicide mission] than a plan to confront Iran.”

Some in Tehran fear the United States and its regional partners are going to start a complicated effort to besiege Iran on the borders of what Iran views as its sphere of national security interests. This means neutralizing Iran’s allies in Syria, Iraq, Lebanon and Yemen, and forcing Tehran to retreat to Iran’s physical borders, with respect to its leverage and the role it plays in the Mideast. Supreme Leader Ayatollah Ali Khamenei tackled this point Oct. 25 during a military graduation ceremony.

"The most pivotal element of our national sovereignty is viewed as an intrusive element by our enemies, one that needs to be fought against,” Khamenei said. “They oppose the development of the Islamic Republic of Iran’s power in our region and beyond, because it’s the country’s strategic depth.”

A few days earlier, President Hassan Rouhani had also addressed the issue, stating that Iran's stature in the region is greater now than at any other time. “In Iraq, Syria, Lebanon, northern Africa, in the Persian Gulf region — where can action be taken without Iran’s point of view?” he asked.

For years, Iranian officials dealt with their growing status in the region as an ongoing operation, adopting a mostly low-profile strategy as they were filling the vacuums in both Syria and Iraq. This might be because Tehran proved its keenness to cooperate with neighbors and put out the message that it has no intention to dominate their areas of influence. But after the tide turned against the Islamic State (IS) in Syria and Iraq, Iran's rhetoric changed. An important tipping point came in June when Iran’s allies reached the Iraqi-Syrian border, from both sides, despite US threats and Russian attempts to convince Tehran not to do so. This heralded a new regional reality, and to Tehran, according to the IRGC source, “It became obvious that whenever you have [enough] forces on the ground it doesn’t really matter who threatens [you] from the sky.”

The breakthrough on the Iraq-Syria border was followed by the entrance of the Popular Mobilization Units (PMU) into Mosul, Iraq, with Iraqi security forces. The move gave Iran a strong confidence boost because, although the PMU forces belong to Iraq, they are supported by and loyal to Iran, and the PMU wasn't on the US list of forces allowed to enter the conflict-torn city. Yet the real confidence booster was the outcome of the Iranian-Turkish role in the crises that followed the Sept. 25 independence referendum in Iraqi Kurdistan. To Tehran, finding solutions to such a big dilemma without the involvement of countries outside the region was more proof that the region is capable of managing its issues independently. That's another reason many in Tehran anticipate a new US effort designed to dismantle Iran’s regional power.

The PMU and Lebanon’s Hezbollah form the military wing of the Shiite "Resistance Axis" that Tehran leads, and both have fallen under close US scrutiny. On Oct. 22, US Secretary of State Rex Tillerson called on all Iranian-backed militias in Iraq to "go home."

"Any foreign fighters in Iraq need to go home and allow the Iraqi people to regain control of areas that had been overtaken by [IS] that have now been liberated," he said while on a visit to Saudi Arabia. "Allow the Iraqi people to rebuild their lives with the help of their neighbors." Iraqi Prime Minister Haider al-Abadi promptly responded that the PMU “is part of the Iraqi institutions,” rejecting accusations that it acts as an Iranian proxy.

The United States announced Oct. 10 it is offering multimillion-dollar rewards for "information that leads to justice" for two Hezbollah officials. US counterterrorism coordinator Nathan Sales told reporters, “The rewards are another step to increase the pressure on them and their organization.” Before the announcement, Saudi State Minister for Arab Gulf Affairs Thamer Sabhan called for forming an international coalition to confront Hezbollah. “The American sanctions against the militia terrorist party inside Lebanon are good. However, the solution to achieving regional security and peace is a stern international coalition to combat [Hezbollah] and those who work with it," he wrote on Twitter.

To Iran, anyone attempting to hit or neutralize Hezbollah and the PMU is trying to clip the Islamic Republic’s wings, and thus undermine its strategic depth. Iran is unlikely to retreat if it perceives a threat to the regional leverage it currently enjoys and has been building for the past three decades. Rather, it is probable that it would respond with confrontation — though it’s not yet clear how or when such a confrontation might unfold.