The art of the deal in Helsinki

A win-win on Syria is there for the taking by leveraging Putin’s relationship with Iran. 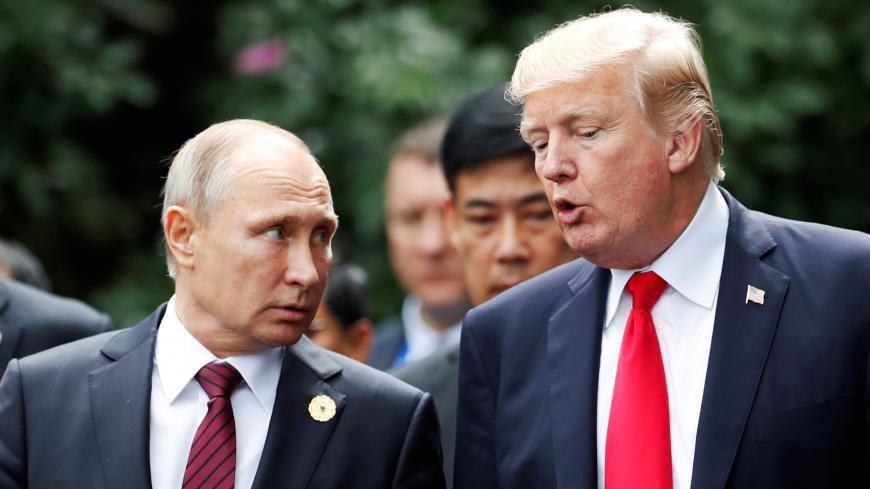 hen US President Donald Trump meets his Russian counterpart, Vladimir Putin, in Helsinki on July 16, a deal on Syria could be closed in good order, to the benefit of both countries, and most importantly, the people of Syria, who are thirsting for an end to the war. In this score, Trump can win by building on Putin’s diplomatic table setting between Israel, Iran and other key regional players.

Fyodor Lukyanov writes, “Trump would be willing to say that there's no threat to Israel from Syria and that Putin will help drive Iran away from the Israeli border. This is what his electorate should hear. And it can be achieved thanks to long efforts to marry the security interests of Iran and Israel in Syria, with neither Trump nor other US representatives being the main protagonists. On the contrary, the key players include Israeli Prime Minister Benjamin Netanyahu and Putin — who have a high level of trust between them — as well as representatives of the Syrian government and top Iranian officials. Contacts are apparently indirect and delicate, with no formal arrangements possible.”

Al-Monitor has explained how Putin has become the go-to mediator between Israel and Iran, while navigating the often conflicting interests of the other regional powers. “The combination of military force with subtle and proactive multilateral diplomacy paves the way for strengthening the central authorities in Syria. Russia is showing uncharacteristic flexibility and taking into account the security interests of the key players — Turkey, Israel and Iran,” writes Lukyanov. “It is also prodding the intra-Syrian groups into interacting quite insistently, even if not always successfully. … Russia … aims to engage all the regional stakeholders since, in its opinion, Damascus can oversee the process of rebuilding Syria only on the condition that all the internal and external forces agree — or at least remain neutral. (Moscow sees the survival of the Syrian regime as the only way to preserve Syrian statehood.) Both consent and neutrality come as a product of arduous and sometimes fruitless work. But the goal can only be achieved through an ‘inclusive approach,’ as Russian diplomats like to call it.”

Not surprisingly, Putin has been fully engaged in the week leading up to the summit, meeting one day with Netanyahu and the next with Ali Akbar Velayati, the foreign policy adviser to Iranian Supreme Leader Ayatollah Ali Khamenei, in Moscow last week.

In his meeting with Putin on July 11, “Netanyahu sought to emphasize that Israel has no contradictions with Russia and that they are working together on Syria,” Marianna Belenkaya reports. “He felt it was important to stress that Russia still gives Israel the needed leeway on Syrian territory. … Shortly after the talks in the Kremlin, Israel followed up with its own strikes on Syria, which Russia didn’t prevent.”

“Moscow allows Israel to behave the way it wants to in Syria under two conditions: If the Israelis strike Syrian positions only in retaliation to Syria’s own offenses, or when Israelis attack non-Syrian forces,” writes Belenkaya. “In all other instances Russia responds with severe criticism, summoning the Israeli ambassador to the Foreign Ministry, something that also doesn’t really prevent Israelis from doing as they please. At the official level, however, no one would confirm this pattern. On the contrary, in all public statements Russian politicians stress the importance and strength of ties with Iran and its indispensable role in the Syrian settlement.”

“As for the departure of pro-Iranian militias, this fits into the trilateral Russia-US-Jordan agreement on the southwestern de-escalation zone. Russian diplomats have emphasized on multiple occasions that there should be no ‘non-Syrian forces’ in the area. Based on observers' accounts, pro-Iranian militias do not — at least officially — take part in the Syrian army offensive in the south. To a large degree, this is to the credit of the Russian military, but it also occurred, to some degree, over concerns of new Israeli strikes,” Belenkaya adds.

Iran is feeling the heat because of the reimposition of US sanctions, which increases Putin’s leverage, although not to the extent those hoping for a turnaround in the Russian-Iranian relationship might fantasize. The relationship is as rock solid as ever, and that could also work to Trump’s advantage, if he seeks to reduce the US military footprint in Syria and the Middle East, as he has said time and again.

Hamidreza Azizi reports, “The Iranian press has been quick to speculate that Russia is about to ‘betray’ Iran once again and to use Tehran as a bargaining chip to reach a deal with the United States. Moscow’s reaction to speculation along those lines, however, has been quite unexpected. For instance, Russia has backtracked from its previous position that all foreign forces, including Iranians, must leave Syria. Instead, Russian officials have started to vehemently emphasize the lawful nature of Iran’s presence in Syria.”

“It’s important to bear in mind the core objectives that led Iran to get involved in the Syrian crisis in the first place. As a longtime ally of the Syrian government, Iran’s primary goal since day one has been to preserve the rule of Assad and to help him regain full control over all of Syria. Against this backdrop, Tehran has long seen the strong foreign — and especially American — support for the armed rebel groups as a serious obstacle to the realization of this critical aim. Therefore, if any possible deal between Trump and Putin entails a US agreement to withdraw from Syria and accept Assad staying in power, the Islamic Republic would definitely consider it a gift,” adds Azizi.

“Iran has already proven that it pursues a wholly pragmatic logic when it comes to the primary goal of keeping the Syrian government in power,” Azizi continues. “For instance, during the joint Russian-Syrian operation in eastern Ghouta earlier this year, Iran kept a low profile, refraining from playing a direct military role so as not to provoke the sensitivities of the United States and its European allies, which could have increased the external pressures on Damascus. Iran’s absence from the ongoing military campaign in southern Syria is an example of a similar dynamic. Considering that its direct involvement would provide Israel with an excuse to target Syrian positions, Iran appears to have complied with Russian demands that it not be present in the area.”

“Aware of Iran’s pragmatist approach, Russia appears to be emphasizing the legitimacy of the Iranian presence in Syria in order to present a fait accompli to the United States at a high price. In other words, the most probable outcome of the upcoming Putin-Trump meeting will be a Russian promise to ‘limit’ the level of Iranian activities in Syria — something that has been already achieved — and to condition Iran’s complete withdrawal on the finding of a real political solution to end the Syrian conflict. In the eyes of Moscow, such a solution is heavily dependent on Washington’s agreement to withdraw its forces from Syria and to help Moscow act as a connecting link between the parallel peace processes in Geneva, Astana and, of course, Sochi. As Iran has previously declared that it’s ready to leave Syria as soon as all ‘terrorists’ are defeated, Tehran would doubtless feel comfortable with the realization of this Russian ‘promise,’” Azizi concludes.

“Russia and Iran's relationship does not only hinge on Syria, even though Syria is currently the single most important issue on the bilateral agenda,” writes Maxim Suchkov. “Russia reportedly said it was ready to invest $50 billion in the Iranian oil and gas sectors to ‘replace the companies [that] have left Iran.’ Another possible move on Russia's part is the ‘oil-for-goods’ deal. Following the meeting with Velayati, Russian Energy Minister Alexander Novak said a deal under which Russia would provide goods to Iran in exchange for oil ‘is still possible’ and that Moscow is now studying all associated legal issues.”

“It is important to bear this in mind when the question is raised as to whether and when Moscow will eventually have to ‘choose between the two [Israel and Iran]’ Russia will not side with only one party since it is not willing to lose its strategic ability to have balanced, engaging, yet reasonably distanced relations with both sides.”

“As if this wasn’t clear, Moscow is now being approached with a proposal to help drive Iran out of Syria. The feasibility of this move is probably derived from a perception that Russia itself wants to curb Iranian influence over genuine disagreements, rivalry for resources, and leverage over Damascus. In many respects, this assessment is correct. Yet, while for the United States, Syria is about Iran, for Russia, Syria is more about the United States. More than Iran's departure from Syria, Moscow wants the removal of US forces,” Suchkov continues.

“In theory, this duality leaves enough space for compromise. Trump is allegedly willing to exploit this by promising Putin a US departure in return for Russia’s guarantees over Iran's removal. Netanyahu is doubling down on the promise with his own incentive for Putin: Israel is not going to target Bashar al-Assad, thus leaving all Russia gains in Syria safe. Israel only requests that Moscow help address Israel’s own security concerns with Iran. This is believed to be a suitable formula for the Russians,” adds Suchkov.

“Political and expert discussions thus focus on whether Russia can guarantee such requests. Some observers, including in Israel and Russia, believe that, in principle, it can. Most observers, however, are skeptical that Russia will risk antagonizing Iran, not to mention there’s no mechanism to check whether Iran is still in Syria, and attempts to find such a mechanism are speculative,” writes Suchkov. “But of all those discussions, there is a missing puzzle piece: What is Iran offering Russia, with its knowledge that adversaries are courting Putin? In this respect, the Velayati visit was immensely important. It showed that Iran has carefully studied all the approaches and chose its own twofold line of reasoning with Moscow. The first stresses the significance of Iran as Russia’s partner in Syria, as opposed to the United States in Syria. It seeks to exploit Kremlin’s own concerns over the US presence in Syria and the underlying distrust of the United States. … The second line of reasoning relates personally to President Trump and presents him as an ‘unreliable counter-partner.’”

This column wrote last month, “Putin’s diplomacy to date has been instrumental in preventing an escalation in Syria, but he can only keep it up for so long without an assist from the United States. But the question is whether Trump will buy into Putin’s plan, and at what price.” And we wrote a year ago, “Russia welcomes and needs US partnership in stabilizing Syria, but whose [Putin's] leverage with Damascus, Tehran and Ankara could be weakened, rather than strengthened, by closer ties with the United States. … Putin’s endgame is relief from US-led sanctions. If no sanctions relief is forthcoming, Putin will have little interest in carrying Trump’s water at the expense of his regional ties.”