Khamenei adviser warns Moscow of 'empty promises' from US

Iran's Supreme Leader Ayatollah Ali Khamenei sent his top adviser to meet with Russian President Vladimir Putin ahead of the Russian leader's meeting with Trump, in hopes that Moscow will remain wary of US promises. 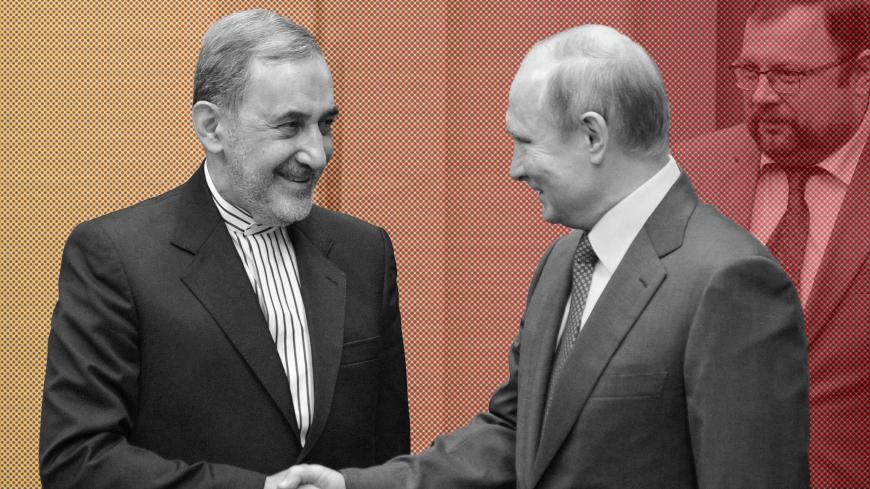 MOSCOW — Days before the historic summit in Helsinki between Vladimir Putin and Donald Trump, each president is honing his negotiation skills. While the US leader has been in Europe arguing with NATO allies, the Russian president is having yet another diplomatic marathon with Syria’s vital stakeholders. No sooner had the Israeli prime minister left Moscow than Putin hosted Ali Akbar Velayati, the supreme leader of Iran's senior adviser for international affairs, at his Novo-Ogaryovo residence outside Moscow. Russian Foreign Minister Sergey Lavrov and presidential aide Yury Ushakov also took part in the meeting.

The top aide to Ayatollah Ali Khamenei came on an important mission to deliver to Putin two written messages: one from Khamenei, the other from President Hassan Rouhani. The spokesman for the Iranian Foreign Ministry, Bahram Qassemi, explained that the letters emphasize “the importance of relations between Iran and Russia” and that Velayati will also deliver similar messages in China to the Chinese leadership. Tehran claims it thus seeks to explain Iran’s “views and stances regarding the United States’ selfish and illegal behavior” to the two critical partners.

Upon his arrival to Moscow — on the same day as Israeli Prime Minister Benjamin Netanyahu — Velayati sought to convey that he was not disturbed by Netanyahu's presence or by what Netanyahu later described as Putin’s consent to restrain Iran in Syria.

“He makes baseless and illogical remarks and nobody cares about his words," Velayati told reporters. "Therefore, his presence or absence in Russia has no effect on our strategic mission."

Yet the praise by Velayati was meant to mirror — or, rather, bounce back — what Netanyahu told Putin. Velayati hailed Tehran’s relationship with Moscow as “strategic,” adding that in recent years “the collective bilateral and regional relations have expanded.”

As Al-Monitor reported, a large part of the two-hour meeting between Putin and Velayati focused on Russia’s efforts to lift Iran from the burdens of US sanctions following President Trump’s withdrawal from the nuclear deal. Russia reportedly said it was ready to invest $50 billion in the Iranian oil and gas sectors to “replace the companies [that] have left Iran.”

Another possible move on Russia's part is the “oil-for-goods” deal. Following the meeting with Velayati, Russian Energy Minister Alexander Novak said a deal under which Russia would provide goods to Iran in exchange for oil “is still possible” and that Moscow is now studying all associated legal issues.

While some may see these moves as part of a Russian “bargain” with Iran over its departure from Syria, they in fact demonstrate that Russia and Iran's relationship does not only hinge on Syria, even though Syria is currently the single most important issue on the bilateral agenda. The same goes for Israeli ties with Russia. It is important to bear this in mind when the question is raised as to whether and when Moscow will eventually have to “choose between the two.” Russia will not side with only one party since it is not willing to lose its strategic ability to have balanced, engaging, yet reasonably distanced relations with both sides.

As if this wasn’t clear, Moscow is now being approached with a proposal to help drive Iran out of Syria. The feasibility of this move is probably derived from a perception that Russia itself wants to curb Iranian influence over genuine disagreements, rivalry for resources, and leverage over Damascus. In many respects, this assessment is correct. Yet, while for the United States, Syria is about Iran, for Russia, Syria is more about the United States. More than Iran's departure from Syria, Moscow wants the removal of US forces.

In theory, this duality leaves enough space for compromise. Trump is allegedly willing to exploit this by promising Putin a US departure in return for Russia’s guarantees over Iran's removal. Netanyahu is doubling down on the promise with his own incentive for Putin: Israel is not going to target Bashar al-Assad, thus leaving all Russia gains in Syria safe. Israel only requests that Moscow help address Israel’s own security concerns with Iran. This is believed to be a suitable formula for the Russians.

Political and expert discussions thus focus on whether Russia can guarantee such requests. Some observers, including in Israel and Russia, believe that, in principle, it can. Most observers, however, are skeptical that Russia will risk antagonizing Iran, not to mention there’s no mechanism to check whether Iran is still in Syria, and attempts to find such a mechanism are speculative.

But of all those discussions, there is a missing puzzle piece: What is Iran offering Russia, with its knowledge that adversaries are courting Putin? In this respect, the Velayati visit was immensely important. It showed that Iran has carefully studied all the approaches and chose its own twofold line of reasoning with Moscow.

The first stresses the significance of Iran as Russia’s partner in Syria, as opposed to the United States in Syria. It seeks to exploit Kremlin’s own concerns over the US presence in Syria and the underlying distrust of the United States.

Velayati, during an address to foreign policy experts and journalists at the Valdai Discussion Club, a reputable Moscow-based think tank, said: “If it were not for Russia and Iran, the leader of [Jabhat al-Nusra] would be ruling in Damascus today and the head of [the Islamic State would be ruling] in Baghdad. … We didn’t come [to Syria and Iraq] upon American request, and we won’t leave under American threats. It’s America that is there without invitation with its own aggressive presence.”

He continued, “I tell Russian officials: Today, [the United States and Israel] want us out of Syria. Tomorrow, they’ll demand you have to depart. It's their plan. Once we leave Syria, Russia too will be [soon] forced to leave.”

The second line of reasoning relates personally to President Trump and presents him as an “unreliable counter-partner.”

Velayati argued, “Trump is an unpredictable man who wakes up every morning to review decisions from the previous day. Don’t think he'll offer President Putin anything logical at the summit.”

He also subtly referenced Tehran’s view that the Helsinki summit may not be a good idea. Asked whether Tehran would be interested in meeting with Trump or his administration to help improve relations, Velayati brushed it off, saying, “These people can’t be trusted."

“We can’t have them meet with us, make empty promises and then say in their propaganda that they made progress in dealing with Iran,” Velayati said, hinting that this is what might happen to Russia after the Helsinki summit.

In the days leading up to the summit, Putin has received a lot of food for thought on how to reconcile the conflicting interests of regional powers, keep Russia above the parties in conflict, manage confrontation with the United States and, ultimately, make other parties look like the winner when Russia is the real winner.