Putin envoy tells Iran that cooperation in Syria will continue

Iranian and Russian officials have insisted that despite pressure from outside countries, the two countries will continue to support the Syrian government. 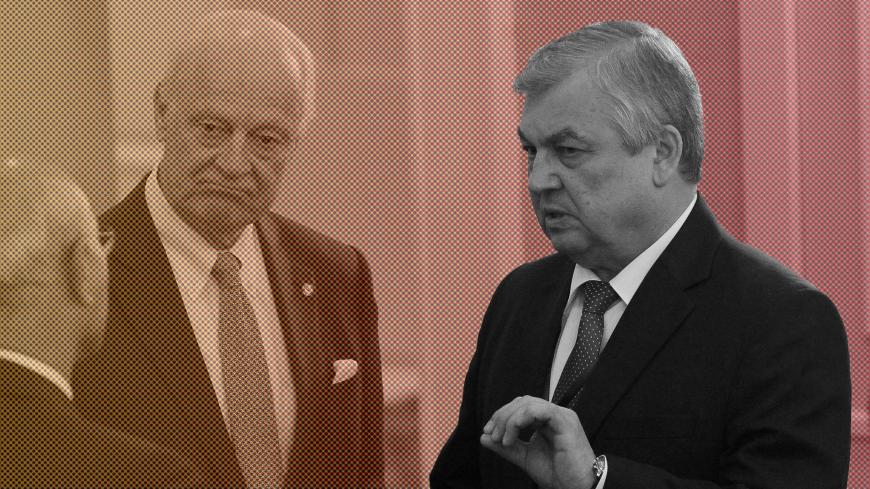 Alexander Lavrentiev, President Vladimir Putin’s special envoy for Syria, traveled to Tehran July 18 to update the Iranians on the results of the much-publicized summit between the American and Russian presidents in Helsinki earlier in the week. Lavrentiev reportedly met for two hours with Saeed Irvanii, deputy for foreign policy and international security of the Supreme National Security Council.

One of the key topics of conversation between the two men was Syria, where — according to Lavrentiev — Russia and Iran will continue to cooperate. “There has been no pause in the determination and will of the Russian government in the continuation of mutual cooperation to fight terrorism, and this path will continue until the establishment of complete stability and security in Syria,” Lavrentiev said.

On the “victories of the Syrian army in southern Syria” and the support of Syria’s allies, Irvanii said, “The latest achievements are important steps in the success of the political process within the framework of the Astana and Sochi talks.” He added that the Islamic Republic would continue to support dialogue between the Syrian sides.

Irvanii also discussed Israel’s role in Syria, saying, “The level of cooperation and the positions of Russia and Iran show that the negative actions of the Zionist regime and their trickiness has no influence on the cooperation of the two countries.” He continued, “Iran and Russia will continue to fight terrorism within the framework of the existing coalition in supporting the Syrian armed forces.”

Israeli Prime Minister Benjamin Netanyahu has sought Russia’s help in keeping Iranian-backed forces out of southern Syria near the Israeli border. According to Saudi-owned media outlet Asharq al-Awsat, as a result of the Putin-Trump summit, Russia will ask Iran to pull heavy artillery to a distance of 80 kilometers (49 miles) from the Israeli border. Whether or not Iranian forces would keep a distance from the southern border, based on the interviews with Lavrentiev and Irvanii, it appears that Russia would continue to support Iran’s overall presence in Syria and not give in to Israeli or American pressure to have the Iranians exit Syria.

Russia’s ambassador to Iran, Levan Dzhagaryan, recently echoed a similar position. Speaking to a Russian newspaper July 18 about “rumors regarding the exit of Iranian forces in Syria, Dzhagaryan said, “First of all, let me remind you that Iran’s presence in Syria is legal. The Iranians and also the Russian army have been invited by the Syrian Arab Republic and are cooperating in operations in the destruction of terrorists.”

Dzhagaryan added that Iran “is not a country where you can apply pressure. It is a large nation and pursues an independent foreign policy. Work with Iranians can only be done through persuasion and pressure on Iran will get you the opposite result.”

Dzhagaryan added that there has been conflict between Iran and Israeli forces but that Russia is working to prevent further clashes.

In an interview with Russia Today, Ayatollah Ali Khamenei’s foreign policy adviser Ali Akbar Velayati, who recently traveled to Russia, also addressed Iran’s presence in Syria. “Our presence in Syria has no connection to America’s demands or other Western countries that follow America’s policies,” Velayati said. “We are in Syria at the request of the legal government in Damascus.”

Velayati added that sometimes there might be “issues” in the cooperation of two countries, but he added that if the United States and Russia have a relationship, “it has no relation to us.” He added, “We will pursue our own interests, and we are inclined to cooperate with friendly nations, meaning Russia. Therefore, we will pursue our independent diplomacy, and we will strive to cooperate without conflicts.”