Having achieved military victory in the key southwestern region of Syria, Iran is actively maneuvering to redefine its approach to securing its aims in the war-torn country. 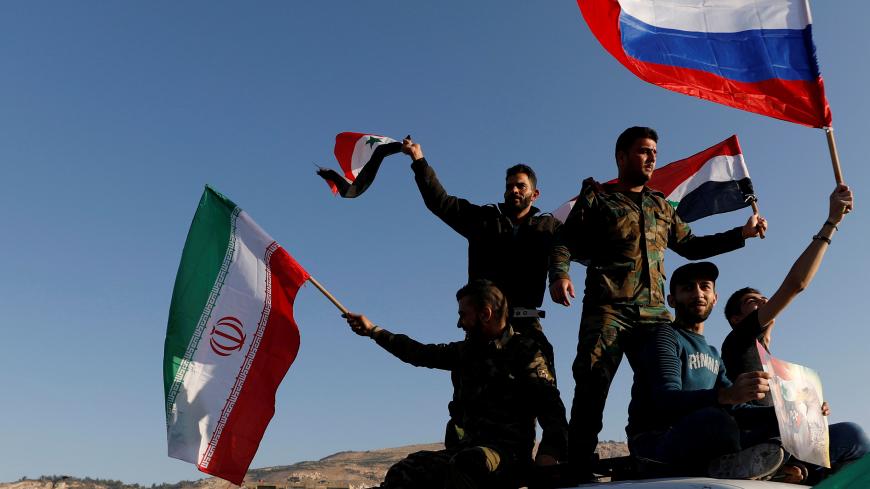 As the Syrian government is now in full control of most parts of the war-torn country, the role of Iran, as a main ally of President Bashar al-Assad, appears to be undergoing significant change.

On Aug. 1, the Russian president’s special envoy to Syria, Alexander Lavrentiev, said Iranian forces, together with their allied Shiite groups, had pulled back from southwestern Syria to a distance of 85 kilometers (53 miles) from the Israeli-occupied Golan Heights. “The Iranians withdrew and the Shiite formations are not there,” said Lavrentiev, underlining that the heavy weapons in the hands of those forces have also been withdrawn beyond the same distance.

Indeed, the move came against the backdrop of frequent calls by Israeli officials for Iran’s complete withdrawal from Syria, claiming that Iran’s presence poses a direct threat against the security and interests of Israel. As such, Lavrentiev’s remarks could lead us to the question of whether the recent development is indicating Iran’s imminent exit from other parts of Syria as well, or whether it’s just a tactical move aimed at readjusting Iran’s Syrian strategy with regard to the rapidly changing equations on the military and political fronts.

Reviewing the wider scene of recent developments regarding the Syrian crisis, it could be said that Iran’s withdrawal from southern Syria has been caused by two sets of military and political factors. First of all, the news about Iran’s withdrawal from the south came just one day after the successful end of the Syrian army’s six-week military campaign to recapture the southwestern region bordering the Golan Heights. Almost three weeks earlier, on July 12, the army had managed to retake the main rebel stronghold in that area, Daraa, known as the “birthplace of the revolt” against Assad in 2011.

As such, it could be said that in the current situation, the southern areas are not a priority anymore for the Syrian army and its allies in military terms and the next phases of massive military operations in Syria are expected to include areas in the northern and eastern parts of the country that are still under the control of armed groups. In a recent interview, Lavrentiev directly pointed to this issue, saying three areas in Syria have yet to be targeted by Syrian army operations. He said, “Those areas include Idlib [in the northwest], al-Rakban camp in al-Tanf area [in the east], as well as the areas under Kurdish control close to the Iraq-Syria border.”

Pro-Iran forces started to evacuate the southern areas when the mission there was accomplished and their presence was no longer vital in determining the military equations on the ground. In a broader framework, it could be said that the pullback was even necessary in order for the Syrian government to consolidate its positions in the south. In other words, as the presence of Iran and its allied forces in the southern parts of Syria has always been used by the Israelis as a reason to conduct strikes against various positions inside Syria, the continuation of the Iranian presence there would mean that the Israeli strikes would continue as well, forcing Assad to deal with a persistent headache that would tie his hands in planning further military moves elsewhere in the country.

Meanwhile, on the political front, it seems that an important factor that has caused Iran to limit the scope of its active military presence in Syria is Russia’s changing diplomatic role regarding the Syrian crisis. On the one hand, while Russia appears determined to continue playing a balancing role between Iranian and Israeli interests in Syria, it seems that the Russians have shifted toward using a more coercive approach in this regard. On July 30, Russia's ambassador to Tel Aviv, Anatoly Viktorov, adopted a controversial stance on the issue, saying that while “Russia cannot compel Iranian forces to quit Syria,” it could “equally do nothing to prevent Israeli military strikes against Iranian forces.” The remarks clearly meant that Moscow is unable to prevent an open confrontation between Iran and Israel in Syria unless Tehran and Tel Aviv come to a middle ground concerning their activities in the country. Limiting the scope of Iran’s activities in exchange for the halt of Israeli strikes seems to be that middle ground agreed to by both sides in order to prevent a devastating escalation.

On the other hand, after the July 16 summit between the presidents of Russia and the United States in Helsinki, in which possible cooperation between the two sides in Syria was discussed, among other issues, Moscow has increased its diplomatic pressures on Washington to limit its military role in the Arab country. On Aug. 3, Col. Gen. Sergei Rudskoy of the General Staff of the Russian Armed Forces called on the United States to close down its military base in al-Tanf, saying the base has become a center for harboring Islamic State (IS) terrorists. As Washington has openly declared that its main goal in Syria currently is to counter Iran’s growing influence, limiting Iran’s presence in the country could be Russia’s selling point to compel the Americans to limit their own presence. As the US military presence in Syria is perceived by both Tehran and Moscow as a threat to their longer-term interests, it’s hard to believe the notion that Iran has been reluctant to provide Russia with an additional diplomatic asset to deal with this common challenge.

Finally, it seems that Iran itself is in a process of redefining its role in Syria, which has mostly been derived from the impression that the end of the war is close and now is a time to focus on safeguarding Iran's interests through political and diplomatic measures. In this vein, Iran is shifting its strategy from playing an active military role toward more actively participating in the diplomatic frameworks regarding Syria. Hosting the upcoming summit of Astana partners, which is due to be held in Tehran in September, could be interpreted as a sign to this end. Iran’s active participation in the establishment of Syria’s Constitutional Committee, which is tasked with developing a new constitution for the country, is another sign of Iran’s changing approach.

All in all, it could be said that the recent withdrawal of Iranian and pro-Iran forces from southern Syria has more to do with Iran updating its Syria strategy and adapting it to be in line with the new political and military developments, rather than a decision to leave Syria due to Russian or Israeli pressures.