Iran maneuvers around gaps to preserve interests in Syria

The West’s new activism on Syria is pushing Iran to adapt its approach, though its bottom line remains the same. 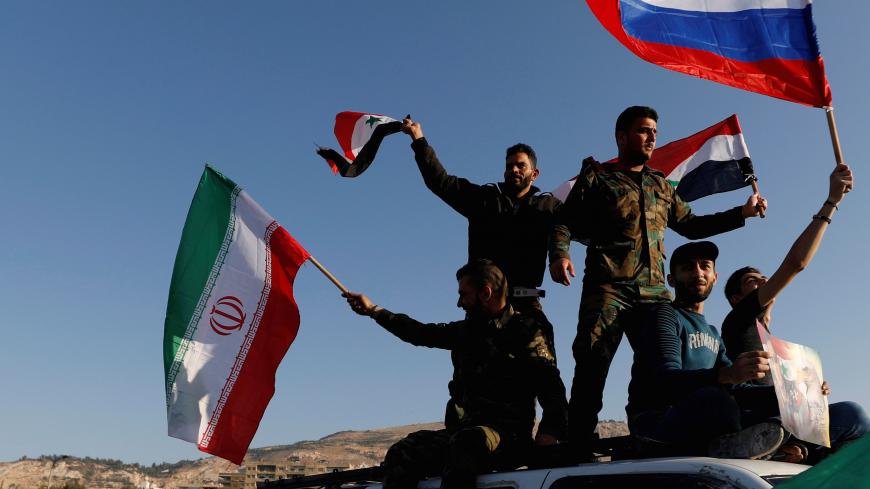 President Donald Trump’s May 8 decision to withdraw from the Joint Comprehensive Plan of Action (JCPOA) has caused international debate on Iran to be mostly focused on the implications of the US move — including the future of the nuclear deal. Yet given the recent and ongoing developments in Syria amid Iran’s active involvement there, the potential of the Syrian crisis to determine the future of Iran’s role in the region remains largely unaffected. Nonetheless, as Western states endeavor to redefine their role on the Syrian stage, Iran has felt the need to adapt its approach to the new equations.

One important development in this regard that could directly affect Iran’s role and interests in Syria is a clear shift in the European approach from playing a mostly political and diplomatic role toward military and operational activism on the ground.

The first representation of such a policy shift appeared when France and Britain joined forces with the United States on April 13 to conduct airstrikes against Syrian military positions in response to the alleged use of chemical weapons by Syrian forces in eastern Ghouta. Furthermore, it was announced May 1 that Paris and Washington are establishing a joint military base in Manbij, a Kurdish-dominated city in northern Syria. Meanwhile, during his official visit to the United States in late April, French President Emmanuel Macron for the first time talked about the necessity of reaching a broader deal with Iran to contain Tehran’s regional activities, among other issues. French Foreign Minister Jean-Yves Le Drian had previously named Iran, along with Turkey, as a country violating international law in Syria.

As the United States has redirected its Syrian strategy from fighting the Islamic State toward preventing the expansion of Iran’s influence, and while the Israelis have been resorting to direct military measures against Iran’s presence in Syria, Tehran sees the recent European activism in Syria as part of a wider plan, devised primarily to undermine Iran’s regional influence. As far as the Syrian issue is concerned, Iran is trying to prevent this scenario from being realized by focusing on at least three main areas.

First, Iran is well aware that while the major European powers are trying to present a coordinated approach on Syria, they have yet to define themselves as a unified front on this issue. While France and Britain appear to be trying to have a say in developments on the ground, Germany has kept its focus on the diplomatic field. For example, Berlin did not take part in the recent tripartite attack on Syria, and underlined that the Syrian government should not be completely sidelined in the process of finding a peaceful solution to the Syrian conflict.

Aware of this gap among the Europeans, Iranian Foreign Minister Mohammad Javad Zarif said April 26 that the Islamic Republic is “ready for cooperation with other states to help reconstruct the violence-torn Arab country.” In doing so, Zarif likely signaled that Iran is not fundamentally opposed to the idea of talking with other powers on the Syrian issue, but that it wants its interests in Syria to be recognized so that cooperation will be possible on matters of mutual interest. If Iran manages to engage with European states with less harsh stances on Syria, it would have the added benefit of potentially preventing the formation of a unified European front against the Islamic Republic's presence in the country.

Second, it seems that the United States and its European allies, as part of their new Syrian strategy to gain more influence in the war-torn country after the defeat of the Islamic State, are trying to delegitimize the Astana peace process, depicting it as incapable of bringing a lasting peace to Syria. France has already taken the lead in forming a diplomatic front comprised of the United States, Britain, Jordan and Saudi Arabia to act as an alternative to the Astana track. This could provide Iran with an opportunity to garner more support from the other two pillars of the Astana track, namely Russia and Turkey, in order to shape a stronger alignment against the West.

The recent ministerial meeting of Astana partners in Moscow on April 28 showed that the first steps have already been taken in this direction. The joint statement issued after the meeting indicates the parties are eager to expand the scope of the Astana format to issues such as hostage releases and humanitarian aid. Nonetheless, it should be noted that an integral part of this approach will be for Iran and Russia to give more concessions to Turkey to keep it apart from the West on Syria.

Third, although Israel has in recent weeks been actively targeting Iranian positions in Syria, Tehran has so far shown a remarkable level of restraint. Even if one agrees with the Israeli narrative that the May 9 missile strikes against Israeli positions in the Golan Heights were conducted by Iranian forces and not by the Syrian army, this should not be interpreted as an Iranian desire for escalation with Israel. Indeed, on the one hand, the alleged Iranian attack was by any definition a restricted response to frequent and wide-ranging Israeli provocations, and perhaps even more notably, it was conducted in the Golan Heights — internationally recognized as being occupied by Israel — and not on the Israeli mainland.

Iran’s decision not to widen the scope of its confrontation with Israel in Syria could be interpreted as another component of Tehran’s approach in face of the West’s new activism. As such, Iran does not see any need for an escalation, since by maintaining close cooperation with Russia it sees the Israeli issue as something manageable down the road. This derives mostly from the view that if Russia finally takes new steps to enhance the Syrian military’s defense capabilities, and especially by providing it with S-300 air defense systems, Iranian forces in Syria would be far less likely to face Israeli attacks in the future. At the same time, Iran is trying not to provoke Moscow to take Israel’s side, thereby preserving a meaningful level of distance between the Russian and Israeli positions.

All in all, it could be said that the cornerstone of Iran’s approach to continue its active role in Syria despite the increased Western activism is to try to build upon the gaps among the West's counterparts and to use such differences in Iran's favor. Although it is still too soon to speak about the prospects for the success of this approach, one thing is certain: Iran is not about to make any compromise over its presence and core interests in Syria.