How Russia-Israel engagement is benefiting Iran

Russia’s engagement with Israel and the United States on Syria does not pose a direct threat against Iran, and it could even turn out to be beneficial for Tehran in several aspects. 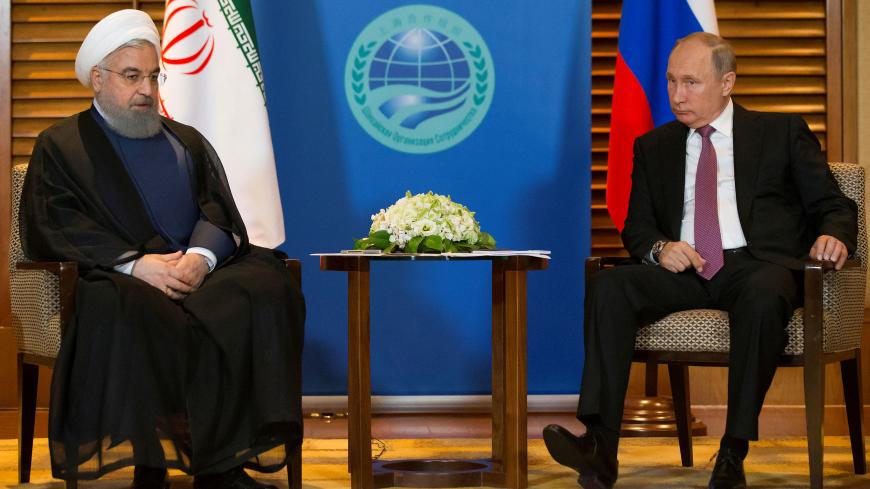 On June 9, Iranian President Hassan Rouhani met with Russian President Vladimir Putin on the sidelines of the Shanghai Cooperation Organization’s annual summit in the Chinese city of Qingdao. Among the issues discussed in the meeting, the two sides touched upon their regional cooperation, especially in Syria, calling it effective in preserving regional stability. According to Rouhani, “The cooperation between Iran and Russia in the war against Daesh [the Islamic State] … has been effective, and such cooperation will continue.” For his part, Putin stressed that the cooperation between Iran and Russia “will go on, as for the settlement of the crisis in Syria.”

The two presidents’ positive assessment of their cooperation in Syria comes against the backdrop of an increasing number of reports that suggest that Moscow is distancing itself from Tehran on the Syrian issue. Differences between the two sides first came to light on May 17, when, during a meeting with Syrian President Bashar al-Assad in Sochi, Putin called for all foreign forces to leave Syria. A day later, the Russian president’s special envoy to Syria Alexander Lavrentiev made it clear that Putin’s remarks were aimed at not only the United States and Turkey, but also Iran and its Lebanese ally Hezbollah.

Frequent meetings between high-ranking Russian officials and their Israeli counterparts, as well as talks with the US and Jordanian sides on the situation in southern Syria, resulted in Russian Foreign Minister Sergey Lavrov’s call for the withdrawal of “non-Syrian forces” from the areas close to the Israeli border. This intensified speculations about Russia changing its course regarding Iran. The speculations went so far as suggesting that Russia “is playing on the Israeli field,” ignoring Iranian interests in Syria.

However, to grasp the current state of Russian-Iranian interactions in Syria and to find out whether Russia’s recent moves mean denying Iran’s interests in the war-torn country, one must take a closer look at what those interests really are in the first place. To do this, we must differentiate between two sets of “maximalist” and “minimalist” or basic goals Iran has defined within the framework of its Syrian strategy.

Although Iran has been consistently declaring that it has only an advisory presence in Syria, there’s little doubt that given the strategic importance of Syria, bordering Iran’s archenemy Israel, having a stable and persistent military presence in the country could well serve Iran’s long-term regional interests. This is especially important with regard to Israel’s long-standing military option against Iran, which has been on the table at least since 2011. In this vein, having a military presence close to the Israeli border could provide Tehran with viable deterrence against Tel Aviv. Nonetheless, given that Russia now seems more mindful of Israel’s security interests in Syria than in the past, even if Iran decides to go ahead with realizing this maximalist goal, it will have little chances of success.

However, Iran’s basic goals, which have always been declared as the country’s official position regarding the Syrian crisis, include the following: keeping Assad in power, at least for a meaningful period until post-war nationwide elections can be held; preventing Syria from being partitioned as a result of foreign intervention; preventing Iran’s regional rivals, especially Saudi Arabia, from taking over the Syrian political structure; and defeating the hard-line terrorist groups inside Syria in order not to let them expand their rule throughout the region.

If one accepts the above as Iran’s basic interests in Syria, it could be argued that not only do Russia’s recent moves in Syria not pose a direct threat against Iran, but they could even turn out to be beneficial for Tehran in several aspects.

First and foremost, as the Syrian military has managed to retake control of more territories over the past several months, Assad’s position appears to be the strongest in years. However, Israel’s frequent airstrikes in Syria, allegedly with the aim of targeting Iranian positions, have had the potential to cause a drastic change in the equation to the detriment of the Syrian state. In this vein, if, by guaranteeing the nonpresence of Iran or pro-Iranian forces close to the Israeli border, Russia succeeds in compelling the Israelis to halt their strikes, Assad and his allies will experience relief in this regard.

Second, as has been reported, per an understanding with Russia, the United States is ready to dismantle its military base in al-Tanf in eastern Syria in exchange for the withdrawal of Iran and Hezbollah from the south. If true, this move will not only lead to expanded control of the Syrian government over the country but will also reduce the concerns over a possible American plan to secede the eastern parts of Syria or have a permanent presence there. At the same time, by accepting the hand-over of control of Syria’s southern borders to the Syrian military, both Washington and Tel Aviv will in effect recognize the legitimacy of the Syrian government, which is a great success for Assad and his allies.

Third, it is useful to bear in mind that Iran itself has already declared that it’s ready to leave Syria as soon as the “terrorists” are defeated. Now, with Russia declaring that “all foreign forces” should leave Syria, Tehran could turn its planned eventual withdrawal from Syria to a bargaining chip, compelling Russia to exert more pressure on Turkey and the United States to do the same as a precondition for the political process. Against this backdrop, Iran is quite certain that leaving Syria will not mean the end of its influence there, as it could be pursued through the role of pro-Iran groups. The case of Iraq is a good example in this regard, where Iran enjoys a great deal of influence without having a permanent military presence there.

At the same time, there’s little possibility that Russia will put something wider than southern Syria on the agenda of its talks with Israel in the current situation, such as pressuring Iran to completely withdraw from Syrian territory. The reason for this is that Iran is one of the three pillars of the Russian-initiated Astana peace process, and part of Iran’s military presence in Syria is to safeguard the “de-escalation zones.” As such, it’s highly unlikely for Moscow to take any step that could weaken the Astana process, at least before the start of a broader political process.

All in all, although there are real differences in the goals, priorities and long-term interests of Iran and Russia in Syria, they are still far from being on completely divergent paths. As such, it would be highly unrealistic to anticipate that the coordination between the two sides in Syria will be halted anytime soon.