What did Lavrov discuss in Egypt, Jordan?

The Russian foreign minister completed his continual Mideast tour with visits to Cairo and Amman. 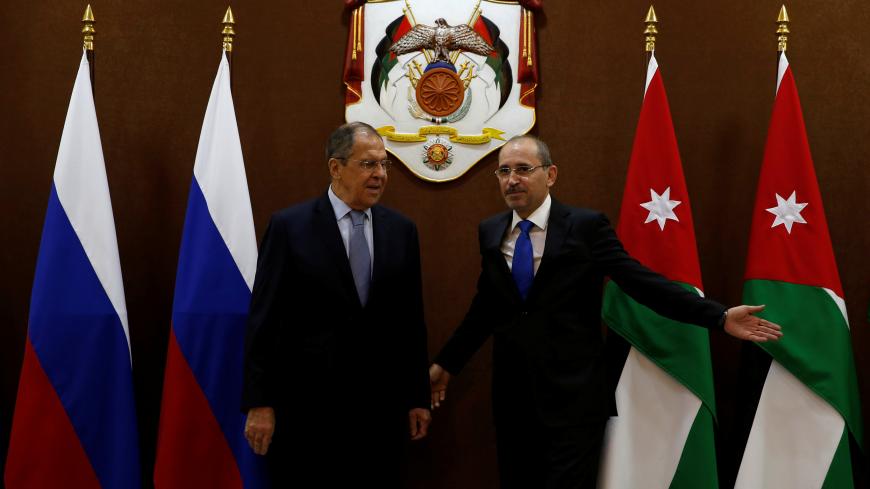 The visit of Russian Foreign Minister Sergey Lavrov to Cairo and Amman on April 7-8 inaugurated an exceptional month for Moscow’s relations with the Arab world. Never has Russia had such an ambitious schedule rife with contacts with the Middle East, with items on the agenda ranging from politics to economics. The level of the meetings varied just as much, involving government ministers, businesspeople and public organizations.

The timing of Lavrov's trip must be highlighted. It practically followed the summit of the Arab League, which failed to broach the subject of restoring Syrian membership, much to Russia’s dismay and despite its efforts. Russian diplomatic sources told Al-Monitor that Moscow blames this on Washington; it is believed here that the Trump administration exerted pressure on some Arab states to leave the subject off the agenda. Russian officials say this seems contrary to US and certain Arab interests in terms of isolating Iran, because Syria's return to the Arab League would likely boost Arab and reduce Iranian influence in Syria.

However, there is still another challenge. As Al-Monitor learned, both Cairo and Amman have signaled their consent to Syria’s reinstatement. However, they expect to meet Damascus halfway and expect President Bashar al-Assad to go the other half. But Damascus’ arrogance has been impeding progress as it feels victorious and rejects any contacts with the Arab League’s representatives. Still, this is not the only problem caused by the defiance of both the Syrian administration and the country’s regional authorities. For example, Jordan has repeatedly complained about the detention of its citizens in Syria, including to Moscow. Russia, in turn, has recognized the problem posed by such Syrian behavior.

The repatriation of Syrian refugees and the resettlement of internally displaced persons is another matter at hand. The situation involving the Rukban camp close to Jordan’s border in a 55-kilometer-wide (34-mile) region around the American al-Tanf base is a burning issue. The United States opposes the closure of this camp. At first, civilians were said to be wary of returning home. However, since UN officials discovered the opposite attitude on the part of most camp inhabitants, Washington has adjusted its rhetoric. The Syrian government, Washington argued, lacks the necessary conditions to accommodate the returnees.

Moscow, however, sees it differently. Lavrov told journalists in Amman that Russia was encouraging Syrian authorities to create and ensure all necessary conditions in the areas where the refugees would return.

“Our insights suggest more than 30,000 places are ready, with housing, water, electricity and basic social services in place. So we fully support Jordan’s desire to see these people return to their homes as soon as possible,” Lavrov said.

He also considered it important to emphasize that it is not only Russia who deems the return of refugees as feasible.

“We also see that Jordan does not share the position of those countries, primarily Western countries, that do not want to provide assistance in creating the conditions for the return of refugees, explaining it by certain changes in the political process, with no criteria clearly formulated. I think this is a gross violation of humanitarian law,” the minister said. “Making them hostage to political games is wrong,” Lavrov added.

The foreign minister said Rukban in essence provides a reason for the United States "to maintain its illegal presence in the south” of Syria.

“We will offer a response,” the minister said.

The United States has repeatedly refused to participate in coordination meetings between the Russian military, representatives of the Syrian authorities and the UN held at the Djleb checkpoint. A recent meeting was attended by Arab tribal sheikhs representing the interests of camp inhabitants. Russian sources privy to the meeting told al-Monitor on condition of anonymity that sheikhs at the meeting said the armed gang of Magavir al-Saura was preventing refugees from leaving the camp and extorting money from down-and-out residents. The sheikhs said they might not be able to make it to a meeting again.

Following the meeting, it was suggested that the United Nations provide transportation to help people safely leave the camp. This requires a green light from New York and coordination with the United States, among other actors, as the camp is located in its security zone. The American military is ready to maintain contacts only through a nearly 2-year-old Russia-American-Jordanian monitoring center in Amman. Moscow does not reject such a format but would like to not only discuss the fate of the Rukban refugee camp but also that of the need for the al-Tanf military base.

Amid Washington and Moscow’s bickering over the issue, the UN suggests considering a third humanitarian convoy; however, Russian policymakers believe this would just postpone the closure of the camp.

Lavrov also focused on greater Russia-Arab economic cooperation. Bilateral trade between Russia and Jordan is no longer on the decline, and in fact increased dramatically, from $157 million in 2017 to $602.6 million in 2018.

These numbers pale when it comes to trade with Egypt, Moscow’s leading trade and economic partner in the Arab world and Africa. According to the Russia-Africa Shared Vision 2030 report, Russia’s cumulative investment in Egypt totaled over $4.7 billion by late 2017. In 2018, Russian exports to Egypt grew from $6.2 billion to $7.1 billion. In addition, Cairo is ranked 18th in Russia’s total exports and sixth in Russia’s commodities exports.

Given the indicators and prospects offered by the Russian industrial zone, Moscow hopes to see Cairo as a springboard into Africa. It is no coincidence that Egypt’s presidency of the African Union will dovetail with the first Russia-Africa summit scheduled for Oct. 24 in Sochi. It is to be chaired by Russian President Vladimir Putin and his Egyptian counterpart Abdel Fattah al-Sisi.

On Lavrov’s return home, Russia-Arab economic partnership continued to dominate the agenda. On April 8, Lavrov addressed the opening session of the Russian-Arab Business Council and the International Exhibition Arabia Expo 2019 involving 15 Arab countries. As a follow-up to a political dialogue, Moscow hosts the fifth ministerial session of the Russian-Arab Cooperation Forum on April 16.