US attack on Syrian jet puts Putin under pressure

Russia’s response to the US downing of a Syrian plane Sunday was more measured than some observers seem to realize, but the Kremlin’s patience does have its limits. 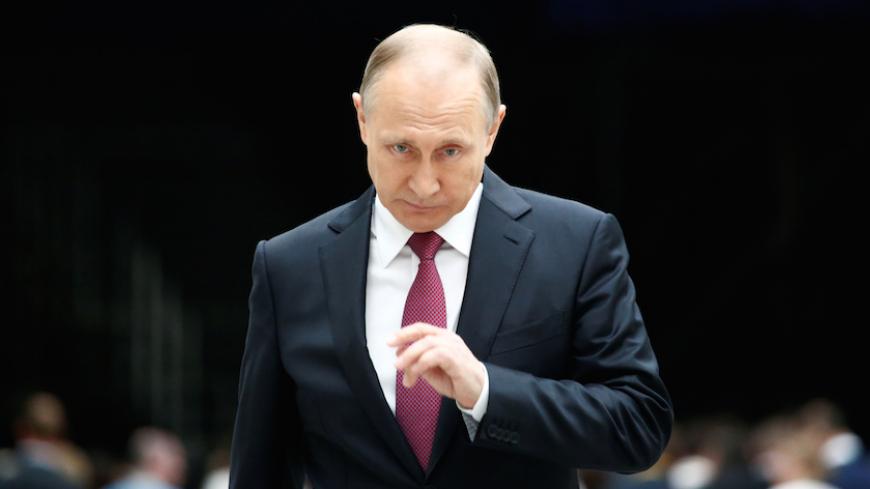 On June 18, a US Navy fighter jet downed a Syrian government warplane — the first such incident between the United States and Syria in more than six years of war in the country. The Pentagon said the Syrian jet had attacked US-supported Syrian Democratic Forces (SDF) fighters near the north-central Syrian town of Ja’din. Syria had a different narrative, saying the plane was downed “in the Raqqa countryside” while Damascus “was carrying out a military operation” against the Islamic State (IS), thus condemning the US attack as an affirmation of its “real stance in support for terrorism.”

The Syrian narrative was almost immediately picked up by Russia. However, the tone of Moscow’s statements was different. The initial response of Russian Foreign Minister Sergey Lavrov — who is in China for the meeting of BRICS (Brazil, Russia, India, China and South Africa) foreign ministers — was rather measured. On June 19, Lavrov reiterated the necessity to fully respect Syria’s sovereignty and territorial integrity and called on the United States and “all others who have their forces or their advisers” in Syria to coordinate their efforts. He also emphasized that actions should be coordinated with Damascus.

Russia’s Defense Ministry was much tougher in its response. It first slammed the US attack as “cynical” and said it could be considered “an act of aggression.” What seemed particularly disappointing for the Russian side, according to the statement, was that “the command of the coalition forces did not use the existing channels of communication between the command of al-Udeid air base (Qatar) and the Khmeimin air base command to prevent air incidents in the airspace of Syria” — an important point from Moscow’s perspective, since Russian forces were also performing combat missions in Syrian airspace at the time.

The Russian Defense Ministry interpreted the US action “as an intentional failure to fulfill its obligations” under a 2015 memorandum about preventing such incidents and decided “to stop the cooperation with the American party within the memorandum.” The ministry demanded a thorough investigation and accounting from the US command.

Halting the memorandum — although a serious measure — isn’t in itself something new or unfixable. Following US airstrikes on a Syrian air base earlier this year, Russia moved to suspend the memorandum. The remarkable difference with that incident was that Russia had been informed several hours in advance of the attack, and the Russian military stayed in touch with its American counterparts. Thus, Russia’s suspension of the memorandum back then looked like a decision Moscow had to take so it didn’t seem as if the US attack was going unanswered. In fact, the agreement was resumed just a little more than a month later, in May.

What makes the current situation more ambiguous in terms of how far Russia might go in its response to the US attack is this section of the Russian Defense Ministry statement: “In the combat mission zones of the Russian aviation in the airspace of Syria, all kinds of airborne vehicles, including aircraft and [drones] of the international coalition detected to the west of the Euphrates River, will be tracked by the Russian SAM [surface-to-air missile] systems as air targets.” The words aren’t Moscow’s commitment to shoot at American planes flying over Syria — as some suggested in the early rush to interpret them. Yet it’s meant to serve as a virtual deterrent should the United States consider any further move from “a position of strength” — the approach it seems to have adopted in dealing with Russia in Syria.

In his recent column for Al-Monitor — published days before the US attack and subsequent Russian response — Paul Saunders accurately suggested that despite frequent American attacks on Syrian government forces, the Kremlin is focused on cooperating with the administration of US President Donald Trump and “is unlikely to respond to US actions as long as that is the case.” Indeed, Moscow still bears hope that Washington will — in words Trump might use — come to its senses and cooperate more willingly against IS. Despite continuous public grumbling, Moscow sees effective dealings with the United States as a key to a successful Syria settlement, even if it’s not always certain what “effective dealings” should mean.

Some high-profile Russian decision-makers confirm that hypothesis, as Moscow apparently doesn’t view the memorandum suspension as something that will lead to a direct confrontation with the United States. Viktor Ozerov, chairman of the Committee on Defense and Security in the Federation Council (the upper house of Russia’s parliament), told the Russian government-owned media outlet Sputnik that the Russian Defense Ministry's stern reaction to the US attack gave him confidence that “neither the US nor anyone else will take any actions that would threaten our aviation.”

“In this regard, the threat of direct confrontation between the aviation of Russia and the US does not arise,” he said.

Yet if Washington is counting on Russia’s restrained response and willingness to cooperate — even as the United States continues to test the limits of the Kremlin’s patience through more direct hits on the Syrian army — it’s important to bear in mind at least the three following factors shaping Russia’s decision-making at the moment.

First, Moscow’s image suffers every time such attacks happen. If Russia doesn’t see a face-saving opportunity for itself, the pressure on President Vladimir Putin will grow. It will grow internationally as Russia’s partners in the Syrian war — President Bashar al-Assad and his supporters, as well as Iran and others across the region — begin to question whether Moscow really means it when it says “Russia doesn’t give up on its folks.” Pressure would also grow domestically, from Putin’s own security establishment and the “patriotic forces” that have been even more galvanized lately by the new US sanctions on Russia.

This represents a second important point to consider. At this stage, Russia’s Syria policy is being determined primarily by the Russian Defense Ministry, meaning that the more such US-led coalition attacks occur, the less that moderate voices such as Lavrov’s will be heeded, since real crisis situations “demand deterrents and other responses on the ground, not just diplomatic condemnations,” as a Kremlin adviser speaking to Al-Monitor on condition of anonymity put it. Putin is the type of person who would rather raise the stakes than yield under pressure; Russia’s policies over the years have repeatedly shown this to be the case. In such situations, reactions — even overreactions — might be much more serious than the very instances that triggered them.

In this respect, some in Moscow urge Putin to “extend the combat scope” of Russia’s S-300 and S-400 missile systems stationed in Syria. The systems were originally deployed not to provide air cover for Assad, as some might have assumed, but to protect Russia’s own military infrastructure in the country — the Khmeimim air base and the naval facility in Tartus. After this downing of the Syrian jet, Moscow is pondering whether it should make more flexible use of the systems.

Finally, Russian decision-makers and experts are also discussing the roles different Washington factions play in Syria. The key question is how much control does Trump himself have over US actions there? Has he outsourced the decision-making to Defense Secretary James Mattis and the senior military command to the point where they can make independent decisions on attacking Syrian government forces? If so, the much-awaited July meeting between Putin and Trump at the G-20 summit in Germany may fall short on concrete results.

The clashes between US-supported forces and Russia-supported Syrian government troops seem to mark the beginning of a new combat stage in the Syrian civil war. Moscow and Washington face the major challenge of melding their respective strategies. Until this happens, however, the biggest winners will be IS and other terrorist groups operating in Syria and Iraq.