Here’s why Russia gives itself high marks for 2016

Russia achieved many of its 2016 goals in the Middle East and paved the way for potentially significant successes in 2017 and beyond. 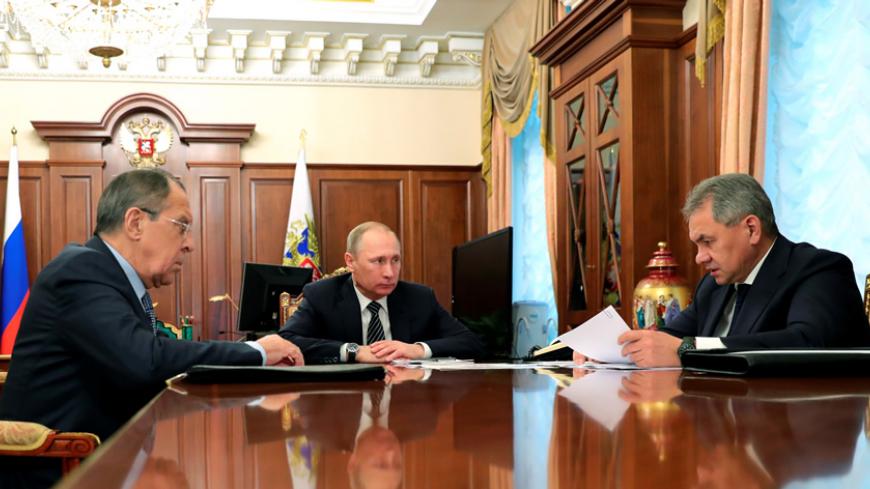 Russia’s chief diplomatic and military agencies are reporting on their performance for the just-ended year, and the news appears to be good.

A newly released report, Overview of Foreign Policy 2016, states, “The key track in strengthening international security and stability in 2016 was the struggle against terrorism.” In this regard, the Middle East and the North Africa region were central to Russian foreign policy, with Syria having been a focal point of Moscow’s political and military effort in 2016.

Indeed, since the start of its military campaign in Syria in the fall of 2015, Russia has dramatically reinforced its regional presence — in some cases, probably contrary to its preliminary calculations. Russia’s ultimate plans for Syria are a matter of speculation. But as far as Moscow’s initial objectives, Russian Defense Minister Sergei Shoigu partly addressed those recently.

At the December extended session of the Defense Ministry, Shoigu said the key task put forward by President Vladimir Putin was achieved: Russian air forces “turned the tide” in Syria. Among the key achievements Shoigu noted were smashing of “large militant groups” in Hama, Homs and Latakia; freeing Aleppo; and “unlocking the traffic artery” tying Damascus to the country’s north.

Shoigu provided some statistics, noting that Russian forces “helped free from extremists” about 500 towns and settlements — covering 4,772 square miles of Syrian territory. Over the course of its military campaign, Moscow carried out 18,800 flights and 71,000 strikes on “terrorist infrastructure,” destroying 725 training camps, 405 ammunition-making factories and 1,500 units of military equipment, according to Shoigu. Russia killed 35,000 militants, including 204 commanders, and 9,000 militants “laid down their arms.” Russia, Shoigu emphasized, also helped capture 48 tanks, 410 mortars, 57 multiple-launch rocket systems (plus 418 such units that were homemade) and more than 20,000 small arms.

According to a report from the Russian Center for Reconciliation of Opposing Sides, by Dec. 27, the total number of inhabited areas whose leaders had signed reconciliation agreements stood at 1,077, while the number of cease-fire applications signed with leaders of armed groupings amounted to 94. The report said 108,000 refugees have now returned to their homes.

On a bigger scale, Russia might not have accomplished all of its stated goals, but it made significant progress toward them. The Russian military is especially proud of “dealing a blow to terrorists, dismantling their networks in the region and disrupting chains of their financial support,” Shoigu said. Moscow is positive that it prevented, at least for the time being, the breakup of the Syrian state and — something equally important for the Kremlin — “halted a chain of … revolutions in North Africa and the Middle East,” Shoigu added. Moscow believes it helped launch a political settlement process that might be the basis for a transitional period and a new Syria.

Russia also gained something it didn’t have a year ago. A modest maintenance facility in Tartus is now likely to become a modern military infrastructure at a critical point in the Mediterranean. Russia has legally solidified its presence by signing an agreement with the Syrian government. From a military-technical perspective, Russia established a multilevel control and management system that enables Moscow to monitor all of Syria — airspace, land and waters — to guide its actions there. This can save significant time in decision-making and improve troop management and maneuvering on the ground. Moreover, speaking last week about key goals for the Russian military, Putin provided guidance for 2017: “The effectiveness of our weapons in Syria opens new opportunities for military cooperation with foreign states; there are many partners who are interested in our arms.”

Certainly, to a more critical eye, Russia’s record in Syria is a mixed and nuanced bag. The civilian casualties in Aleppo, the tug-of-war with the Islamic State (IS) over Palmyra, the crash of two jets based on the Admiral Kuznetsov aircraft carrier, as well as terrorist attacks close to Russian military infrastructures (such as those in Tartus in May) were costly, including to Russia’s reputation. They bared Russia’s military vulnerabilities, and they ultimately brought about an enlarged presence, whereas a drawdown announced in the spring was supposed to seal the tactical assets secured by that time. The turbulent nature of the region concealed a lot of thunderheads for Moscow — uncalculated risks and unexpected developments that complicated Russian strategy. The recent assassination of Russian Ambassador Andrei Karlov, as well as other human loses Russia suffered in Syria this year — all in all, 24 — exemplify such thunderheads.

The most dramatic and unfortunate failures came in Moscow’s relations with Washington:

Russian journalists counted that over the year, US Secretary of State John Kerry and Russian Foreign Minister Sergey Lavrov had at least 70 meetings and phone conversations. But most of the initiatives remained solely on paper or were derailed by a strong belief by Moscow and Washington that the failures were the other party’s fault. Eventually, after another failed attempt to do something together, the Kremlin gave up on the idea of working with the administration of US President Barack Obama — which was equally fatigued of working with Putin — and turned its eyes to cooperation with regional stakeholders Iran and Turkey.

In January 2016, Moscow managed to navigate through the rough waters of the Iran-Saudi Arabia spat before it turned into a direct clash. Contrary to popular expectations, Russia took a rather neutral stance despite its strong language condemning Saudi Arabia’s killing of Shiite cleric Sheikh Nimr al-Nimr. Iran remained a key partner in the Syrian war and its consent was instrumental in implementing Moscow’s main initiatives. Russia and Iran may see the endgame in Syria differently and might have different “work styles” because of their differing national interests in Syria and beyond, but their dealings are critical in fortifying a unified policy on ending the war in Syria, and the current respective leaderships seem to understand that.

For Russia and Turkey, 2016 brought roller-coaster relations. After the jet crisis in late 2015, the relationship remained strained for months. After numerous attempts by Turkish President Recep Tayyip Erdogan to mend the situation, the two met in St. Petersburg. As the relations started to normalize gradually, contested issues remained on the agenda, with each party moving perhaps much slower than the other wanted: Moscow didn’t rush to lift all the sanctions imposed after the downed jet, and Ankara wasn’t backing off on its initial position that Syrian President Bashar al-Assad needed to be overthrown.

Recognizing objective limits to a full-fledged partnership, Putin and Erdogan tried to maximize benefits when cooperation was possible. In 2016, more than 750,000 Russians vacationed in Turkey despite Russian tourism sanctions during the first half of the year; in October, construction of the Turkey Stream gas pipeline and the Akkuyu nuclear power plant were reapproved at the top level.

The end of the year marked a number of dramatic events, with the killing of the ambassador raising fears of a new round of tensions. However, the unfortunate death had the opposite effect, with Moscow and Ankara entering a new round of talks, both in the trilateral format with Iran and with critical Syrian opposition groups, which eventually set the table for the upcoming meeting in Astana, Kazakhstan, and may pave the road to the peace process in Syria.

It clearly is a long and difficult work in progress, but Moscow’s logic is that getting Saudi Arabia, Qatar, the United Arab Emirates, Egypt, Jordan and Israel on board in some way will be critical in ensuring the Syria deal holds. Though the United States now seems to be excluded from the process, the Kremlin looks forward to a more robust cooperation with the incoming administration of Donald Trump. Thus, Moscow’s current activities aim to secure a solid position in the negotiations.

Russia’s approach to the situation in Lebanon may well be an indication of how it might approach other big regional crises — in Yemen, Libya and Iraq, for example — where Moscow’s involvement has been less publicized. Between the two options it had in Lebanon — to directly support one party or create conditions necessary for the interested players to reach an agreement among themselves — it opted for the second one, and that approach has been paying off so far. Given the amount of contacts with Libyan and Iraqi actors, there’s enough reason to presume these topics will be increasingly present on Moscow’s radar screen in 2017. In general, Russia’s policies in the Middle East in 2016 — complicated and controversial as they may be seen — laid out a foundation for something bigger.