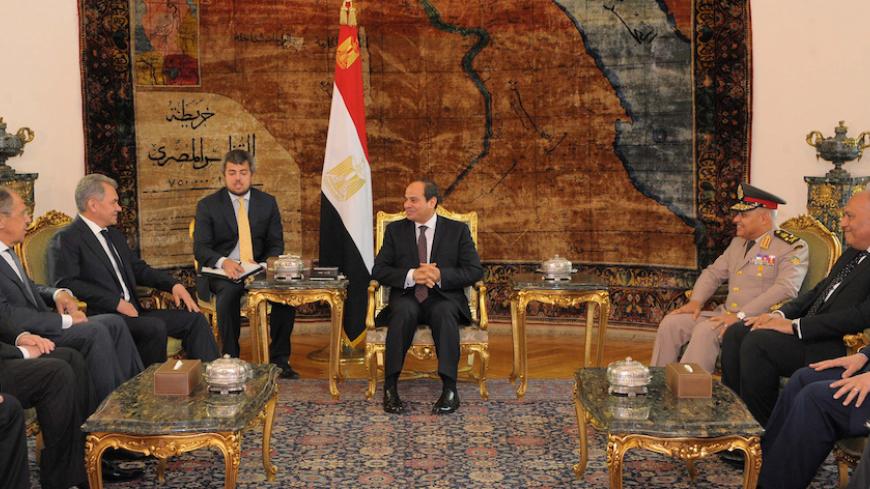 For international dealings of top importance, Moscow in recent years has greatly favored the “2+2 format,” sending defense and foreign ministers out together for high-level talks with their foreign counterparts. The mixture of diplomatic and military, widely employed by Russia in its latest foreign policy activities, is believed to reflect what an official in the Kremlin once called “a growing convergence of foreign policy, defense and security-related issues in world affairs.” The agenda Russian Defense Minister Sergei Shoigu and Foreign Minister Sergey Lavrov discussed with their Egyptian colleagues during their May 29 visit to Cairo definitely falls into this category.

Still, as Russian media outlets noted, Shoigu and Lavrov experienced very different receptions from the Egyptians. While the former was escorted in a showy motorcade accompanied by vehicles equipped with mobile phone jammers and gun slots on the sides, the latter was rather modestly taken on a bus to the embassy motorcade. This contrast led many in Moscow to speculate that military issues were of a much bigger priority for Egyptians during the visit. The perception of Shoigu as the messenger of President Vladimir Putin in these and other talks isn’t groundless. According to the latest survey, the defense minister is Russia’s second-most-trusted politician (18.5% of respondents) following Putin himself (49.9%) and preceding Lavrov (15.3%). With Russian military having been in the public eye more frequently in recent years, Shoigu’s position in the overall defense and foreign policy apparatus is strong and solid — at least for now.

Sensing the need to court the Egyptians by raising their regional profile, Shoigu told his Egyptian counterpart, Col. Gen. Sedki Sobhy: “Egypt is a most important strategic partner of Russia in North Africa and the Middle East. We are interested in the leading role of Cairo in strengthening security and stability [in the region].”

Indeed, the topic of “jointly combating terrorism” dominated the talks. Their visit took place just days after bombings that killed Coptic Christians in Egypt, and the Russian ministers were eager to ensure that Moscow gets a “priority partner” status in fighting terrorism alongside Cairo. On this matter, Moscow’s proposals had to have a practical orientation — namely, in Lavrov's words, to help “block the channels used to deliver financial support, weapons and recruit new fighters.”

Alluding to US President Donald Trump’s suggested anti-terrorist coalition with a strong emphasis on countering Iran, Lavrov said Russia and Egypt “agreed to work toward creating a truly universal front against terrorism, without double standards or attempts to exclude anyone from this process or exploit the fight against terrorism for geopolitical purposes.”

It was also critical for the Russian ministers to ensure Egypt’s support for the Russian-led “safe zones” initiative in Syria, as well as the Syrian peace talks in Astana, Kazakhstan. Prior to the visit, sources in the Russian Defense Ministry suggested the ministers shouldn’t “exclude a possibility that the Egyptian military may take part in safeguarding the zones.” In the final press conference with Egyptian Foreign Minister Sameh Shoukry, Lavrov fell short of providing any details, only mentioning, “We would be happy to see our Egyptian friends join these efforts” to implement the de-escalating areas.

A source in the Russian Embassy in Cairo, speaking to Al-Monitor on condition of anonymity, said, “The Egyptians are considering their own participation on the ground but would like to have more clarity on what exactly the zones would look like and how they should function.”

Not much has been mentioned about the civil war in Libya, yet the issue was believed to be one of the key agenda items for the talks. Lavrov did praise “the efforts taken by Egypt and the United Arab Emirates toward rapprochement between the Libyan parties” and said Russia supports “the initiatives … advanced by the Arab League, the African Union and the UN.”

The bulk of the issues covered with Egyptian President Abdel Fattah al-Sisi were bilateral. Shoigu and Lavrov were tasked with, among other things, looking into the possibility of extending the 10-year Strategic Partnership Agreement signed between Russia and Egypt in 2009.

Shoigu noted at the meeting that arms sales have traditionally been a big component of the relationship, the Foreign Ministry reported. “We are witnessing sustained positive dynamics in developing cooperation in the military sphere and are looking to offer our Egyptian friends most interesting projects in the military-technical cooperation domain,” said Shoigu. In 2014, the parties signed a $3.5 billion arms deal that they implied was for supplies of Russian small arms as well as air defense systems and aviation. In the fall of 2015, Russia’s Kamov Design Bureau signed a deal to supply Egypt with 46 Ka-52 “Alligator” Attack Helicopters. The initial shipment was assembled earlier this year and Egyptian specialists are reportedly already being trained near Moscow. Russia is well-aware of the difficulties Cairo is facing; Egypt can either purchase the weapons on credit or with Saudi money. The Shoigu-Lavrov visit thus was important in talking through prices and details of these and other deals, since both of the above-mentioned factors limit contract size.

Russia also eyes boosting economic ties and energy projects in Egypt. In a joint news conference with Shoukry after the meeting, Lavrov specifically mentioned “the construction of Egypt’s first nuclear power plant and the creation of a Russian industrial estate in Egypt,” as well as “a free-trade zone between Egypt and the Eurasian Economic Union.” The countries indeed signed an agreement on the El Dabaa power plant under which Russia was to provide a $25 billion construction loan to Egypt. The project didn’t run smoothly, however, and an intergovernmental commission will be assembled in the fall “to settle the formalities” of the project, as Lavrov put it.

The one thorny issue with no apparent light at the end of the tunnel is restoration of the direct air connection between Russia and Egypt. All flights were suspended in November 2015 after the Islamic State (IS) claimed responsibility for the explosion that destroyed a Russian plane over Egypt’s Sinai, killing 224 people. Moscow insisted on the presence of Russian security specialists in Egyptian airports as a condition for resumption of flights. After several inspections of Egypt’s airports, the Russian experts told Egyptian authorities the facilities still did not meet the security requirements Moscow puts forward. The Egyptians strongly disagreed. The source in the Russian Embassy who spoke with Al-Monitor said it’s unlikely direct flights will resume anytime soon. Until the suspension is lifted, it will certainly be a factor complicating the bilateral relationship.

In general, the Russian ministers’ visit was meant to have an effect far beyond Russian-Egyptian dealings. Rossiyaskaya Gazeta, the Russian government’s official newspaper, joked that “2+2 doesn’t necessarily make 4,” noting that the visit was closely watched in Washington, Saudi Arabia and Libya, which all have their own stakes in Egypt.

Notably, the meetings and contacts the Russians have had in the last week are virtually a follow-up of Trump’s recent Middle Eastern trip. No sooner had Lavrov and Shoigu returned from Egypt than they joined Putin in hosting Saudi Deputy Crown Prince Mohammed bin Salman at the Kremlin. And prior to meeting with the Saudis — soon after Putin returned from France — Putin spoke by phone with Iranian President Hassan Rouhani.

Not long after Trump’s election in November, Al-Monitor addressed Russia’s potential challenges in dealings with key states in the Middle East and North Africa region: “Regardless of how regional rulers feel about Trump, there’s a call for a fresh start in relationships with the United States across the region. … Should Trump take advantage of the opportunity to restore US relations with its allies, Moscow may be forced to work out a different type of relationship with these states.” This visit of top Russian ministers is a reflection that the Kremlin is seeking to convert understanding of this matter into policy.