Will Russia adopt 'first to strike' policy in Syria?

Bombings in Tartus and Jableh have led Russia to reassess the risks it faces in Syria. 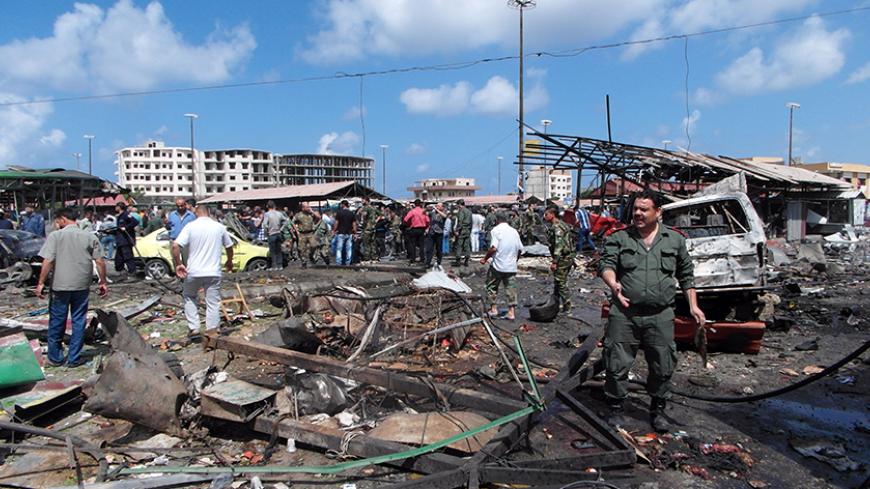 Syrians gather at the site of multiple bombings that left several dead in the northern coastal city of Jableh, between Latakia and Tartus, May 23, 2016. - STRINGER/AFP/Getty Images

The bombings in the Syrian cities of Tartus and Jableh that claimed the lives of more than 120 people on May 23 were a stark reminder that the situation in Syria is much farther from peace than statements of relative diplomatic successes may suggest. Russia is one party that should be especially worried, and it is.

The terrorist attacks spurred anxious reactions among Russian authorities. The Foreign Ministry called them an “attempt to disrupt efforts aimed at preserving the cease-fire and undermine the overall political settlement of the Syrian crisis.” At a press conference, Dmitry Peskov, press secretary for President Vladimir Putin, said the attacks “demonstrate the fragility of the situation in the region.”

Such assessments draw attention to the two principal issues the Kremlin has stressed from the beginning: external support for jihadi militants in Syria and their designation as terrorist groups on the list recognized by the UN Security Council. For these reasons, Moscow echoed the sentiment of Syrian Prime Minister Wael al-Halqi that the attacks “wouldn’t have been possible without support of the states that are financing and arming terrorists.” Moscow also stressed that the attacks were a “blatant challenge not only to the government of Syria but to the entire international community, which is clear about its collective position in favor of an inter-Syrian national agreement.”

Indeed, both issues are central to Russia's foreign policy approach of constructing a delicate political process with prospects for a transition in mind. Along the way, however, not only are the ambitions of Syrian President Bashar al-Assad an impediment, but so are breaches of the brittle cease-fire by signatories as well as those who didn't sign on to the truce. Regarding the latter, news that Ahrar al-Sham had claimed responsibility for the attacks, never mind that it denied responsibility the next day, floated the boat of Russia's desire to include the organization, along with Jaish al-Islam, on the list of terrorist organizations in Syria. Moscow has consistently been adamant about this, but its appeals to Washington for agreement have fallen flat. “We didn’t insist on it too much at the beginning as it was part of our concession package,” said a retired Russian diplomat privy to discussions on the issue within Russia's decision-making circle. “But now it’s up to the Americans to move forward with it if they want the cease-fire to hold.”

If Jabhat al-Nusra or the Islamic State (IS) perpetrated the bombings, that would represent an even bigger challenge for Russia. In any case, it means that despite the US-Russian-brokered cease-fire, extremist groups can exert influence even on territories they don’t fully control through their capacity to launch large-scale terror attacks. The issue for Moscow is how to manage its presence in Syria now that groups are turning to guerrilla-style terror tactics. Given Russia's military posture, IS as a quasi-state would be easier to defeat than its potential guerrilla incarnation. If the latter becomes the reality — something experts and policymakers in Moscow are examining — it would be a different type of challenge for the Syrian army and government as well as all the other players involved, including Russia and the United States.

As for the bombings' implications for the Russian presence, even though media coverage did not focus too much on connecting the dots between the attacks and the proximity of the Russian military facilities — the naval base at Tartus and the Khmeimim airbase and reconnaissance center — the message was well-received in the Kremlin. Of interest, at his press conference, Peskov declined to comment on whether Russia will reassess its decision to pull out a large part of its forces from Syria, but he did say, “The infrastructure of our legitimate presence in Syria, on the request of the Syrian government, does foresee a very flexible approach to the size of our contingent.”

Peskov's statement reflects the options being discussed in the Kremlin. On the one hand, instances like the two terrorist attacks could tempt Moscow to deploy a larger scale presence to preserve the security of the military facilities and to sustain the mission that it began in September 2015 until its successful completion (that is, a political transition). On the other hand, such a move would be fraught with potentially major consequences, including the possibility of falling into a quagmire, which Moscow thought it had escaped with its draw down in March.

Backing away from the established course is not on the table for Putin, who soon after the terror attacks sent a message to Assad expressing his condolences and reaffirming Russia's eagerness to continue supporting its “Syrian partners” as well as its commitment to cooperate in Syria's fight against terrorism. That means a third option — something “creative” and “unexpected,” as has recently become the norm with Russia — might be under consideration. In any case, it will not be a spontaneous, reactionary move. Moscow will take its time to examine how and why the security frontier in the Syrian war is shifting. As the Syrian army and the various coalitions prepare to launch major offenses against key cities held by IS, the extremist movement — if the May 23 attacks were its “work” — is infiltrating government-controlled territories from the rear to strike civilians.

Another possible calculation and concern is the state of security and governmental control over northern Lebanon. In a private conversation, a former member of the Russian military compared the border area to a “mesh strainer,” with extremists “commuting” back and forth between that part of Lebanon and Syria. This makes Russia's interest in maintaining a united, viable and secure Lebanon all the more real. In this light, increased Russian participation (in one form or another) in what is looking a lot like a “presidential deadlock” shouldn’t be a surprise, nor should its eagerness to beef up security along the Syrian-Lebanese border. That will be about it, however. There’s little evidence that Moscow will extend itself beyond what is needed to meet its basic operational objective — securing its military facilities.

In an appearance last year, Putin stated his now well-known maxima that explains a big part of his character, behavior and vision for power: “If the fight is inevitable, be the first to strike.” With a number of critical battles in Syria and Iraq in sight, there’s no question for Moscow that the fight is inevitable. The Russian military facilities will therefore be used at full capacity to make sure they are not struck first.