All players in the Syrian war are scrutinizing the recent bloody assaults on Syrian civilians and the range of results that are likely. 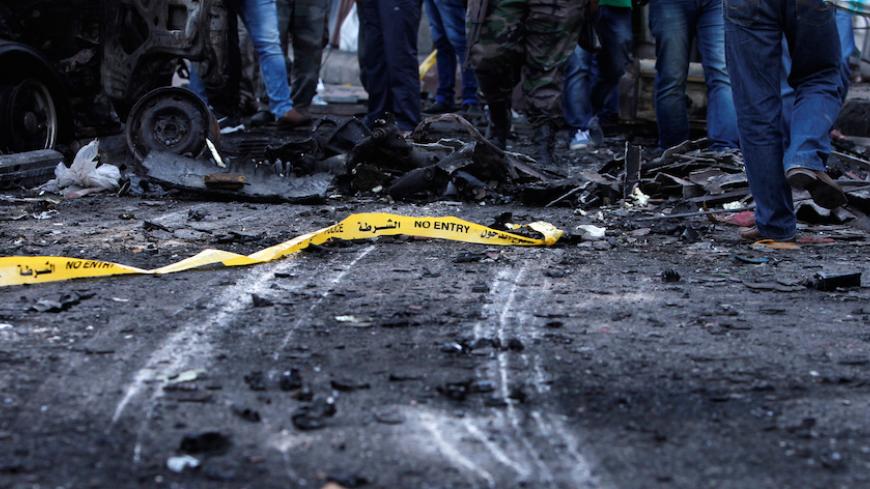 Men stand near debris and a police line after explosions hit a bus station in the Syrian city of Jableh, May 23, 2016. - REUTERS/Omar Sanadiki

The May 23 terror attacks that killed nearly 150 civilians and injured 200 in the Syrian towns of Jableh and Tartus are creating serious consequences that affect the situation in Syria and the surrounding area.

First, these attacks are the first security breach of the Syrian region, which has so far been considered a government stronghold. Of course, according to Russian analysts, if even major European states are not able to protect themselves from such acts of terror, it doesn’t mean the jihadis’ breakthrough to Latakia indicates a shift in the balance of power in Syria in their favor. Nonetheless, Russian experts expect the Syrian government to take stringent measures to strengthen security in this region that is far from the frontlines.

Second, the majority of the victims, according to Al-Monitor’s sources, were Alawites. There are some concerns that these attacks may intensify the sectarian component of the Syrian conflict and unfold a spiral of fierce revenge. An anonymous Syrian source told Al-Monitor the leadership in Damascus is aware of the danger of such a scenario and will try to avoid it. However, it is clear that the fight against terrorism in Syria will become even more uncompromising.

Third, the threat to the already-fragile cessation of hostilities has increased dramatically, and without the cease-fire, there can be no progress on the political front. As stated by the Russian Foreign Ministry, “We see this as a brazen challenge not only to the government and the citizens of Syria, but also to the authority of the international community.” Russia and the United States, as co-chairs of the International Syria Support Group, will have to make proactive joint efforts to prevent a total collapse of the cease-fire and disruption of the political process as a result of these new terrorist attacks.

Fourth, Moscow will take additional measures of protection against terrorism. Not coincidentally, Russian officials have recently intensified their calls to consolidate international efforts against terrorism in Syria. Moscow was disappointed the United States rejected its well-known proposal to launch joint strikes against terrorist groups in Syria beginning May 25. In the meantime, the Russian military said it reserves the right to launch strikes against those groups that refuse to join the cease-fire.

In this context, it is not so important who is considered a terrorist by the international community and who is not. According to Dmitry Peskov, press secretary for President Vladimir Putin, the Kremlin is concerned about the events taking place in the region. However, would this prompt Putin to reconsider his decision to scale back the Russian military presence in Syria? Touching on this issue, Peskov only recalled the statement made by the Russian president May 23 that the “infrastructure of our legitimate presence in Syria, at the request of the legitimate leadership of this country, implies the possibility of a very flexible approach to the size of our troops.”

Meanwhile, the Russian Defense Ministry denied reports by a number of media outlets that four Russian helicopters had been destroyed by terrorists. The ministry said there were no casualties among the airbase personnel.

Yet who stabbed the Syrian loyalists right in the heart? Was it the Islamic State (IS), which claimed responsibility for the terror attacks? Russian analysts believe this terrorist group to be the most likely culprit. Or was it Jabhat al-Nusra? During his May 23 phone conversation with US Secretary of State John Kerry, Russian Foreign Minister Sergey Lavrov reminded Kerry that Washington should fulfill its promise to distinguish between the US-backed Syrian opposition and Jabhat al-Nusra militants.

Syrian Prime Minister Wael al-Halqi said, “These explosions and shootings would have been impossible without the support of the [regional] states financing and supplying arms to the militants.” An informed Lebanese source told Al-Monitor that preliminary analysis of the Latakia attacks raises doubt that they were committed by IS, Jabhat al-Nusra or even Ahrar al-Sham, which Syrian state TV channel Surya blamed because of the high level of planning and execution. From that, one could conclude that the intelligence service of one of the states in the region is the only player that could have organized those attacks. The Arab world is, of course, fond of conspiracy theories, but such reasoning might have some truth to it.

Finally, the incident is going to affect the situation in neighboring countries. There is every reason to believe that the new round of violence in Syria is in some way associated with the signs of destabilization in Lebanon’s North Governorate.

It is not a coincidence that the terror attacks in Latakia came after the beginning of the offensive on Raqqa by US-backed forces, with Kurdish groups playing an important role. Moscow is closely watching how this operation unfolds. The Russian information agency RIA Novosti reported a statement by Nasser Haj Mansour, a member of the Kurdish defense committee in Hasakah province, that the “Kurdish forces took control of the freed territories” and that IS “was unable to keep any of its positions during the combat clashes that we carried out in coordination with the coalition.”

Mansour claimed that the Kurdish troops have long known how to counter IS methods such as suicide bombers, snipers and sleeper cells. It was also reported that the “militants burn houses in Syrian settlements that are taken over by the Kurds.”

The Russian analysts are assuming that the US doesn’t want Kurdish troops to advance to the west to close the corridor between Kobani and Afrin and unite all three Kurdish cantons into one extended zone. That move could provoke Turkey to unleash a large-scale military operation against the Syrian Kurds and put the US and all of Turkey's NATO allies in a difficult situation. Analysts say the US is making every effort to redirect Kurdish military efforts to the south, to Raqqa. That action would kill two birds with one stone: It would prevent, or at least delay, a direct military confrontation between Turkey and the Kurds and it would help strengthen the forces fighting against IS.

It is from that angle that one should view the US’ and the Syrian Democratic Forces’ recent initiative to free Raqqa from IS militants. It can also be assumed that, in addition to the above-mentioned goals, the US is also hoping to avoid a situation in which Raqqa would be freed by the Syrian army with the help of Shiite militants from Arab countries, along with Russian air support. Russia knows that it would be unacceptable for its American partners in combat against IS if Damascus established its control over the territories freed from IS. In other words, Americans prefer the Kurds (as well as Assyrians, Arab groups, Armenians and Turkmens) over the Syrian army.

However, as an anonymous senior source from the Kurdish People's Protection Units reported to Al-Monitor, that part of the Kurdish movement is not going to abandon its objective of unifying the three Kurdish cantons for the sake of capturing Raqqa. Meanwhile, the Russian Ministry of Foreign Affairs stated, “Moscow is willing to coordinate its efforts with the US-led coalition and Kurdish militia in Syria for the purpose of freeing Raqqa.”