Are Russia, US ready to cooperate on Syria and beyond?

Moscow is taking a wait-and-see position as the new US administration takes shape, but Russian President Vladimir Putin seems to see the potential for military and political cooperation with the US not witnessed since World War II. 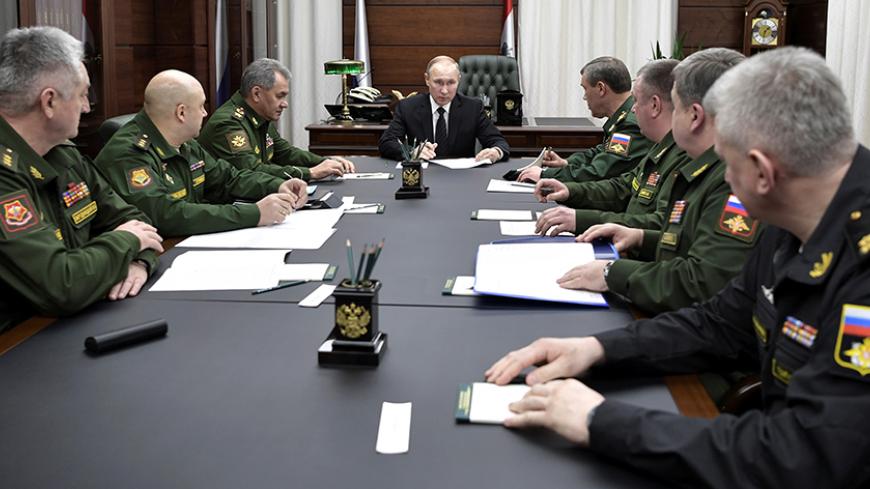 As the Syrian war rages on and intense preparations are underway for Feb. 23 peace talks in Geneva, a key question being raised is whether Moscow and Washington might be coming together to reach a deal on Syria, or at least pooling their efforts to tackle the Islamic State (IS). The idea of such cooperation is anticipated by some and rejected by others.

A potential call for military cooperation with the US is brewing among Russian experts. Given the nontransparent nature of the Russian decision-making process, it’s hard to tell how accepting midlevel military personnel and diplomats are of this prospect. Most seem rather cautious about getting their hopes up for cooperation with the US. Some, like their American counterparts, feel a deep-seated distrust. But all are watching the thorny staffing process in Washington, trying to read the cards of nominations and what they might mean for the character of American foreign policies.

In the Kremlin, the idea of forging a tactical alliance with the US is considered possible and is certainly hoped for. President Vladimir Putin seems to believe in the concept of a US-Russia "Coalition Against World Evil 2.0” as the modern-day reincarnation of the alliance that defeated Nazi Germany in World War II. Should US President Donald Trump give it a green light, his Russian counterpart would fully embrace it.

Very telling of that is Moscow's consideration of Anatoly Antonov as its top pick for the new Russian ambassador to the US. A career diplomat commissioned to serve as deputy defense minister in 2011, Antonov has virtually become the face of the Russian campaign in Syria. In December, Putin transferred Antonov back as Foreign Minister Sergey Lavrov’s 10th deputy, responsible for what he has proved good at over the years: military-political affairs. Should Antonov be appointed as Russia’s top man in Washington, it would be a clear sign that the Kremlin prioritizes this political-military dimension of the US-Russia relationship as a major area for cooperation — including in Syria. Such cooperation might be selective and it might never be smooth, but it’s hoped to pave the way to a broader “normalization process” with America.

During the Cold War, the military angle eventually shaped a general framework for mutual containment and defined general rules of the game. Moscow’s logic is rather simple: If we are back in that type of confrontational relationship — no matter that the world has dramatically changed since the end of the Cold War — and there’s a more conservative government on the other side of the aisle oriented toward greater pragmatism, let’s find solid ground for bilateral dealings. In the absence of other functional foundations, military cooperation against IS and possible broader military-political contacts might lay this ground.

The route from theorizing to implementing strategies doesn't usually run directly from A to B, but rather from A to C, with B encountered along the way. There's a Russian saying that seems to perfectly describe the current aspirations: “It looked so plain on paper, how could we have possibly forgotten about the ravines?" The difference is that the “ravines” are probably well-known and understood — with various degrees of accuracy — both in Moscow and Washington, but it’s still difficult to say how much must be done to overcome them.

For the Trump administration, there is multilevel opposition to cooperating with Russia: in Congress, in much of the media, from Democrats and even many Republicans, as well as within the State Department and Pentagon. There’s no unanimous certainty in Moscow that Trump will be willing to spend his political capital fighting all of the opposition to unite with Putin in defeating IS and other extremist groups.

Putin clearly doesn’t meet a similar type of domestic resistance, but he is challenged primarily by the need to overcome the “checks and balances” of Moscow’s relationships with its tactical allies in Syria — President Bashar al-Assad, the Iranians and the Turks, as well as the Kurds and Israelis. All of them have their own caveats about a potential US-Russia alignment, and not all are entirely happy about what it might bring for them.

Some top decision-makers in Moscow believe if the leaders of both countries show the political will, their militaries will ultimately develop a common approach to tackle IS. This optimism is based on Trump’s vision for investing whatever it takes to serve America’s best interests. Dismantling the terrorist infrastructure in Syria and Iraq falls into that category, so some in Moscow believe Trump will find ways to work with Russia on this issue.

So far, however, not all the military options offered to the Trump administration on how to deal with IS are eagerly supported in Moscow. Arguably, the most controversial option is to establish “safe zones,” which most of the Russian military sees as “no-fly zones,” with all the expected implications for the Russian air force flying in Syria. Commenting on the Trump proposal to introduce the safe zones, Putin’s Press Secretary Dmitry Peskov noted, “It’s important that the decision should not exacerbate the situation with refugees. Besides, the US administration should calculate all the possible consequences."

Colonel-Gen. Igor Maltsev, former air defense chief of staff, explained some of Russia’s concerns: “We don’t know what, exactly, 'safe zones' implies. But it would be unacceptable for such zones to be created in areas where Syrian government forces are fighting terrorists. In that case, [the zones] would preclude the possibility of our aerospace forces helping the Syrian army.” His major concern is that US and allied air-defense forces might down Russian jets, which could lead to unpredictable consequences, including a global military conflict.

At this point, Russia isn’t pinning all its hopes for Syria and beyond on potential cooperation with the US. Moscow continues to engage with a number of regional players and intra-Syrian factions, calculating its own challenges, opportunities and further moves. Yet the US remains a critical go-to player. While the Kremlin continues to promote its interests via other means, it will wait patiently until the Trump administration gets a sense of how to best approach Russia. Until then, it’s essential to see what signals Moscow and Washington exchange to help convey their ultimate intent regarding one another.