Russia picks 'bull terrier' as new ambassador to US

Can the extensive experience of Russian ambassador-in-waiting Anatoly Antonov, who has played an instrumental role in Moscow's policies across the Middle East, overcome controversy in Washington to pave the way for cooperation? 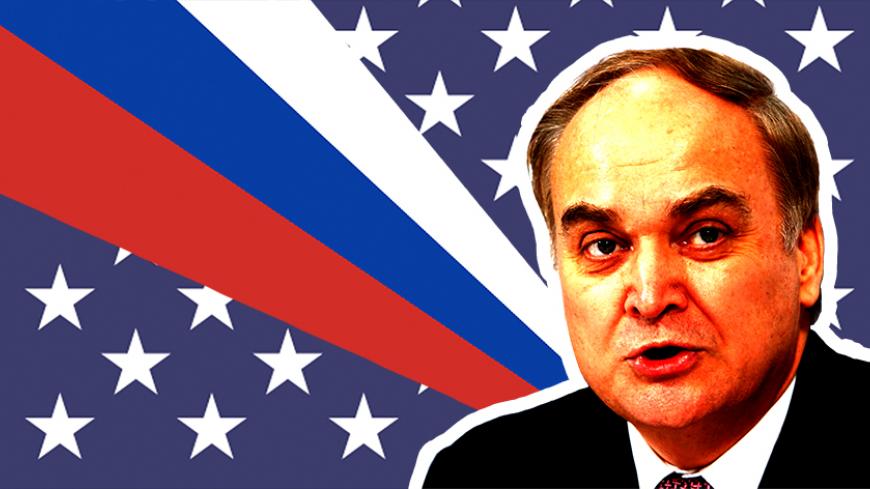 Fresh people and ideas are badly needed as Russia seeks to bridge the gap between Moscow and Washington, amid a tide of highly polarized information.

The person who is supposed to be Russia’s key facilitator in the process — Ambassador to the United States Sergey Kislyak — has been in that position since 2008. During that time, Kislyak took the heat for Russia’s most bitter foreign policy crises — the war in Georgia in 2008, the war in eastern Ukraine, Russia’s takeover of the Crimean Pensinsula and the gay rights protests, which were largely reported in the Russian media as an anti-Russian campaign in the run-up to the Sochi Winter Olympics.

Recently, Kislyak has come under fire over the nature of his contacts with members of US President Donald Trump’s election campaign and allegations of spy activity in Washington. It’s rumored that Kislyak is likely to become an adviser to President Vladimir Putin as part of a wider reshuffle of Russia’s foreign policy structure. His replacement as ambassador to the United States has already been chosen.

On May 18, the Committee on Foreign Relations of the Duma — Russia’s lower house of parliament — confirmed the nomination of Deputy Foreign Minister Anatoly Antonov. His candidacy was reportedly sponsored by Foreign Minister Sergey Lavrov and endorsed by Putin.

Antonov, who turned 62 three days before the Duma confirmation, is a rare mix. He graduated in 1978 from the Moscow State Institute of International Relations, where he majored in international economic relations. He has had a long and diverse career in the Russian Foreign Affairs Ministry ever since.

Antonov led the ministry’s Department of Security and Disarmament for seven years (2004-2011) and headed Russian delegations to numerous security conferences, including ones on nuclear, chemical and biological weapons. He also led negotiations with the United States on missile defense, strategic arms and export control.

After more than 30 years with the ministry, he was reassigned by Putin in 2011 to the Defense Ministry. In his new capacity, Antonov was responsible primarily for Russian military cooperation and military-technical dealings with other nations. In facilitating international contacts on behalf of the Defense Ministry, he was instrumental to the Russian campaign in Syria and policies across the wider Middle East. He was also actively engaged in dealing with the Obama administration, working for cooperation on Syria against the Islamic State and Jabhat Fatah al-Sham (formerly Jabhat al-Nusra). The desired cooperation never fully materialized.

Having been honored with numerous military and state awards, Antonov was moved back to the Foreign Affairs Ministry near the end of last year. Being Lavrov’s 10th deputy, Antonov was tasked with what he’s been good at: coordinating political-military and security-related foreign policy, including working with NATO states’ diplomats and military personnel.

Speaking to Al-Monitor on condition of anonymity, one of Antonov’s former colleagues in the Foreign Ministry called him an “experienced, skillful and tough negotiator.” Another source described Antonov to the Moscow Times as having the determination of a “bull terrier.”

Following the closed confirmation hearing, Antonov lamented the negativity in US-Russia relations, while in fact “many strategic objectives and tasks coincide.” He also spoke in favor of strengthening US-Russian relations, emphasizing the two should “jointly fight against the chief evil: international terrorism” and “continue nuclear disarmament.” Yet, he noted, Russia won’t “yield its positions.”

“We need to convince our American colleagues that equitable, neighborly and mutually respectful relations meet the interests of both the Russian and American peoples. … Russia and America are simply fated to positive cooperation.”

His official appointment is anticipated in July following an expected meeting between Putin and Trump in Hamburg at the G-20 summit of leading and developing nations. Meanwhile, under the Vienna convention on diplomatic relations, Moscow has to ask Washington to approve the appointment.

Rumors of Antonov’s potential appointment started circulating in Moscow when the US presidential campaign was fully underway and the Russian leadership expected Hillary Clinton to win. The choice is an important element in the Kremlin’s thinking regarding the Trump administration. Speaking to Al-Monitor, Dmitri Evstafyev, a professor at the National Research University's Higher School of Economics, said the appointment of Antonov, a hard-liner, is supposed to send a threefold message to Washington.

“First, the fact that Moscow decided to go with the same person it considered for the nomination should Clinton have been elected means in its relations with America, Russia is guided by its own principles rather than the standing of the White House,” he said.

The second message, according to Evstafyev, is that the Kremlin believes a constructive dialogue with the United States is unlikely to happen, and even if it does, it would mostly involve military-political issues. Thus, Russia needs someone in Washington “who not only gets the mentality of the Foreign Ministry but is also familiar with the logic of the Defense Ministry.”

Finally, “Appointing such a complicated figure — and in the American perception, he surely will be one — is very much in the ‘spirit’ of Putin. Which [implies] if Washington doesn’t accept this candidacy, it’ll have to wait for an alternative one for a long time, and that person may be even tougher,” Evstafyev said.

Another important point to consider is how Moscow sees the current situation in Washington concerning “all things Russia.” Last week, Putin described the allegations about the Trump-Lavrov meeting as “political schizophrenia,” while saying that at first the Trump-Russia theme seemed amusing, but now is rather “disturbing.” The situation reinforces Moscow’s conviction that it needs someone who can stand firm under criticism but who also brings a good share of the needed “pragmatism” into the relationship.

Amid reports of expanding communication between Russia and the United States in Syria, as well as likely preparations for a new military phase on the ground for both nations, having a person with a record that spans these and many other facets of the military and diplomacy may be instrumental for what Moscow deems “anti-terrorist cooperation” with the United States. As the United States is apparently still preparing Jon Huntsman to be its new emissary to Moscow, the two countries are slowly converging on a path for continuous interaction — at least that seems to be the plan.