What is Russia’s role in Syria and the 'post-West' world order?

Russia is not wasting time while the new US administration gets its bearings on Syria and the rest of the world. 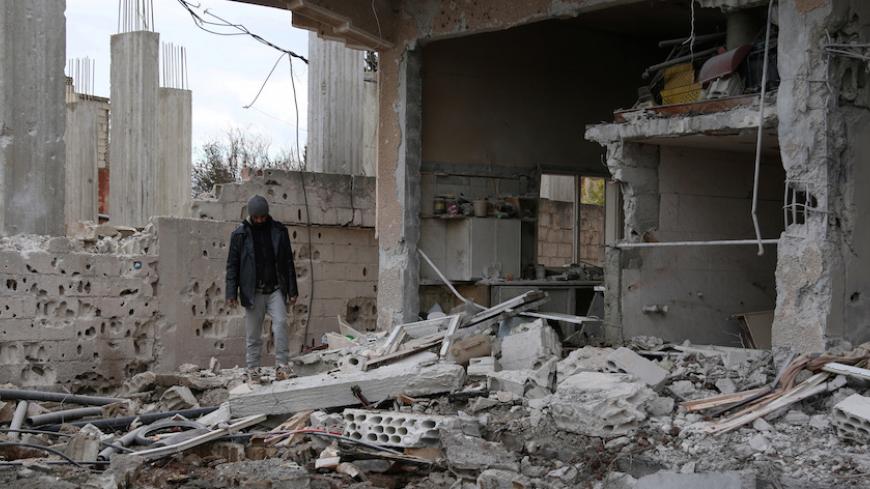 A man inspects a damaged house after an airstrike on al-Yadouda village, in Deraa governorate, Syria Feb. 15, 2017. - REUTERS/Alaa Al-Faqir

It’s become customary not to expect much from the Syria peace conferences. The warring parties argue around same mutual claims, often stick to maximalist positions and frequently seem more interested in trying to project a sympathetic image to outside observers than in discussing the issues on the agenda. External sponsors, in their turn, are usually facing three challenges: whom to invite; how to make the Syrian government and opposition forces to agree to something — even a tiny step — that can be more or less monitored; and how to package mediation efforts as a diplomatic success.

Assembled after numerous delays and rescheduling, the fourth round of Geneva talks held under UN auspices was no exception in this regard. Even Staffan de Mistura, the UN's special Syria envoy, said Feb. 22 that he wasn’t “expecting a breakthrough.” In a sense, this time there were no talks about a Syria settlement per se, but the talks have proved instrumental in moving toward sewing together patches of the opposition groups. This and de Mistura's proposal to create groups to work on drafting the constitution, holding elections and planning for the transition process in Syria have so far been key outcomes of this round in Geneva. The work along these lines is supposed to produce at least modest results until some solution is reached and the parties are ready to move to a more substantial level of discussions. Until that time, everyone should brace themselves for the meetings to be lingering and attritional.

Against this backdrop, major foreign stakeholders in Syria were making some moves before Geneva. Earlier this month at a meeting in Astana, Kazakhstan, the top Syria cease-fire sponsors — Russia, Turkey and Iran — decided to establish a joint group to monitor the truce. Russia has also unilaterally asked Damascus to halt the bombing campaign while the Geneva talks are underway — all to make sure the diplomatic progress Moscow has achieved is not in vain.

Another move Russia made was to ensure the negotiations comply with UN Security Council Resolution 2254. Among other things, that document calls for equal participation of different segments of the Syrian opposition, including the so-called Moscow, Cairo, Astana and Khmeimim groups, as well as the Kurds. Russia has insisted on including the opposition groups loyal to Moscow. The groups might lack power or representation on the ground, yet their very presence tempers the moods of more radical opposition peers on a number of issues. The “Cairo group,” for instance, sees Syrian President Bashar al-Assad staying in power for the transition period and leaving once it’s over. The Moscow group is of the opinion that political reform in Syria should top the agenda, not Assad’s fate. Therefore, Moscow sees the presence of these groups in Geneva as a way to reach a more moderate solution.

Meanwhile, America’s position in the negotiations is indeed what Al-Monitor Washington correspondent Laura Rozen called “an unintended drag on political talks gaining momentum now.” The Donald Trump administration is still struggling to form its policies, a fact Russia has to consider. Yet Moscow signals that it’s not going to reconstruct its Syria policy around hypothetical cooperation with the United States — especially now that these chances are looking rather slim. It might be in Russia’s interests to set Syria on a certain path before the Trump administration works out its own course. This is not just because it’s good timing to define terms favorable to Russia, but also because there are already enough Middle East issues that have everything it takes to further split Moscow and Washington: Iran, different takes on the Arab-Israeli conflict and ways of settling Libya, to name a few.

Delivering his remarks Feb. 18 at the Munich Security Conference, Russian Foreign Minister Sergey Lavrov said, "The post-Cold War order has ended. The world didn’t become either West-centric or more secure. Results of the [failed] democratization of the MENA [Middle East and North Africa] region show it clearly.” He added that “new centers of global influence” will now assume greater international responsibility. If projected to the Middle East, these statements help explain what Moscow will be banking on in the future: more cooperation with regional stakeholders coupled with their greater empowerment in dealing with regional security and other challenges.

Moscow’s view for the “post-West world order” is, according to Lavrov, “when every country on account of its sovereignty and within international law will be seeking to balance its own interests and interests of its partners respecting their cultural, historical and civilizational uniqueness.” It is this concept that drives Russia to engage more with Iran, Turkey, Jordan, Egypt and many others.

That doesn’t mean Russia is defying Western powers. Lavrov said, “The strain in relations between North America, Europe and Russia in the last couple of years is unnatural; I’d even say counter-natural.” This time, however, Western governments are barely seen as “privileged partners” for Moscow. Heavy baggage has accumulated among them in recent years, but the Kremlin’s thinking toward the West these days is very different from what it has been — probably since the times of Peter the Great, who groomed Russia to become a “European nation.”

The emphasis on constructing a working relationship with the United States is still felt: “With the US, [we are seeking] pragmatism, mutual respect and understanding of a common responsibility for global stability,” Lavrov said. “The potential for [such] cooperation is immense and we are open to explore it as much as our American partners are.”

Moreover, there was a message implied for Trump from the top Russian diplomat, whose speech in Munich came not long after that of US Vice President Mike Pence. Lavrov said, “Russia isn’t seeking conflicts with anyone, but will always be capable of defending its interests. It’s our unconditional priority to reach our goals through a dialogue with everyone, to seek an agreement based on a mutual benefit.” The statement is a reflection of a rather genuine aspiration, but there’s more to it, which Russian President Vladimir Putin’s press secretary, Dmitry Peskov pointed to later that week: “We are not losing hope of restoring relations with the US, but by not jointly tackling a number of burning international issues, we are just losing time.”

There’s seemingly increased vigilance in Moscow to determine if the US National Security Council’s amassing of military men means a more assertive foreign policy course, including in the Middle East. There's also a strong belief that Michael Flynn’s resignation as national security adviser and the increasing pressure on President Trump over his “Russian sympathies” will force Trump to take a tougher line on Russia. If so, that’s even more reason for Moscow to not put all of its eggs in one basket and to diversify its partners, options and strategies in Syria and across the region. That is another policy Moscow is likely to take, regardless of the results of the Geneva talks.