Three years in Syria, Russia sums up achievements and challenges

On the third anniversary of the Russian campaign in Syria, Foreign Minister Lavrov summed up Moscow's achievements but conceded challenges persist. 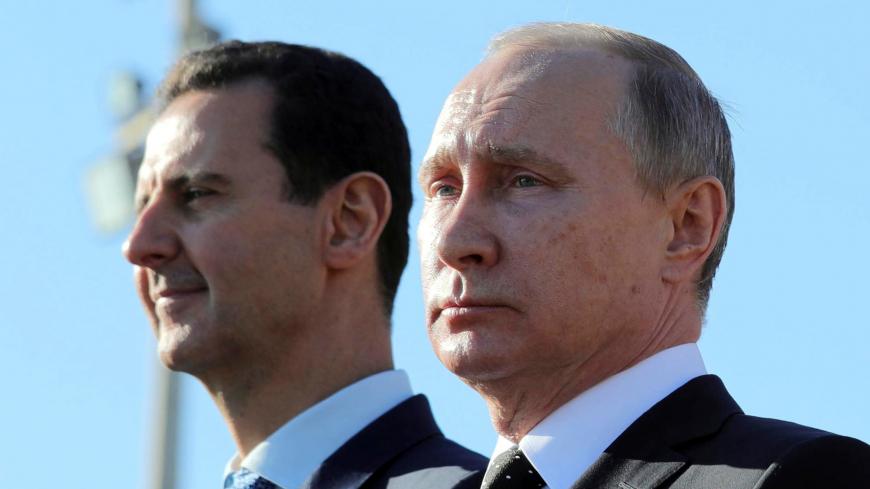 Sept. 30 marked the third anniversary of the Russian military campaign in Syria. The third year has turned out to be one of the most challenging for Moscow. The system of coordination with diverse regional powers — whose interests, at times, diverge — that Moscow has diligently built has been jeopardized. Currently, Russia’s main problem is what to do in the face of the United States' intensified policy in Syria. Foreign Minister Sergey Lavrov summed up the political results of Moscow’s presence in Syria during a press conference on the margins of the UN General Assembly. In particular, he highlighted the following three outcomes that Moscow finds crucial:

1. The elimination of “terrorist hotbeds in southern Syria, Homs and eastern Ghouta,” as Lavrov put it. Due to Russian military and diplomatic support, Damascus re-established its authority over most of Syria, except for the zones still controlled by Turkey and the United States. For Russia, this question — whether to accept the partition of Syria before a political solution is found or to confront the allies and “conventional partners” — will be a central challenge of the next year. For now, however, Moscow spares no criticism of Washington.

“The main danger to Syria’s territorial integrity originates from the eastern bank of the Euphrates, where independent and autonomous structures are created under the direct control of the United States," Lavrov said during his visit to Sarajevo on Sept. 21. "We will insist that they should stop these unlawful actions. We have repeatedly voiced this request — both in the UN Security Council and to Americans directly."

Yet Russia avoids reprimanding Turkey in this way, instead accepting the armed opposition’s control over Idlib as a compromise. Moreover, Lavrov regularly emphasizes that the agreements on Idlib do not endanger the territorial integrity of Syria, contrary to the situation on the eastern bank of the Euphrates. This serves as a hint to Damascus that Moscow is still committed to the integrity of Syria and guarantees that Idlib will sooner or later return to the government. It is also a polite appeal to Ankara, meaning that allies are allowed more freedom in their actions.

Moscow has essentially disregarded the areas of northern Syria that Ankara occupied during its Olive Branch and Euphrates Shield operations. Although, as recently as spring 2018, Lavrov has actively urged Ankara to return Afrin to the Syrian government. Russia has not given up this position, but its priorities have changed. The top priority is to preserve the Astana format as a whole, and the alliance with Turkey in particular, even if the allies’ objectives do not fully overlap — a fact that Moscow acknowledges, as Russia considers these relations obligatory for progress in the Syrian resolution.

2. “The problems of humanitarian aid provision are solved more efficiently,” Lavrov said was Russia’s second accomplishment in Syria over the past three years. After Damascus retained control of the southwestern de-escalation zone in the last several months, Moscow has promoted and began to implement its plan of repatriation of Syrian refugees, which has been designed as carefully as a military campaign and brought to life by Russian servicemen, among other parties.

Reports of military operations and victories over terrorists on the Defense Ministry website soon gave way to reports on the reconciliation process and refugee repatriation. Russia intensified its work in this area after the Russian-American summit in Helsinki on July 16. During the summit, Vladimir Putin said Russia and the United States “should take responsibility for this issue and cooperate to facilitate the [resolution of the] humanitarian crisis.” Several days later, the Russian Defense Ministry launched the Center for the Reception, Allocation and Accommodation of Refugees in Syria. Later, Russia created the Interagency Coordination Center of Defense and Foreign Ministries.

If the project turns out to be successful, Russia will use it as proof of Syria’s return to peace, meaning that a full victory over terrorism has been achieved. However, the United States and other Western nations did not approve of Russia's repatriation plan. They considered it premature given the absence of a political resolution. Syria’s neighbors, suffering from the burden of hosting refugees, were the only ones enthusiastic about the project. According to official sources, from early August — when the repatriation plan was adopted — to Sept. 26, 1.47 million Syrians returned home. Approximately 1.2 million were internally displaced, and only 244,000 returned from abroad. Without foreign support, Damascus and its allies will hardly be able to find the financial means to accommodate those who had the courage to return home.

The repatriation issue is also important with regard to the future of elections and referendums in Syria. If nearly every fourth citizen of the country is living abroad as a refugee or a displaced person, democratic procedures will not be considered legitimate. Moreover, even if they are able to vote while outside the country, their choice will be unpredictable and the regime will very likely dismiss the results as tainted by “foreign influence.” The refugee question is a significant instrument of manipulation for all actors of the conflict in Syria that cannot be resolved without political processes. However, the political resolution is impossible without an efficient answer to the refugee problem.

3. “The creation of the Astana trio, which had taken the responsibility to promote political resolution when the UN had been inactive” is the third and most crucial result stressed by Lavrov. According to Lavrov, the main outcome here is the Syrian National Dialogue Congress, which took place in January 2018 in Sochi. The congress was the first negotiation venue where both the regime and the opposition agreed to work according to the 12 principles established by UN special envoy Staffan de Mistura. The same congress decided to form the Constitutional Committee and outlined its principles. One can hardly disagree with Lavrov, as these decisions have been the only signs of political progress toward a resolution in recent years.

The UN-hosted negotiations in Geneva have carried on to no avail. According to Al-Monitor’s sources close to the participants of the talks, the lack of progress is due to de Mistura’s attempts to find common ground between all sides of the conflict, who refuse to surrender their positions. On the other hand, the Astana process allows Moscow to virtually push through its decisions while finding compromises between Iran and Turkey, or the Syrian regime and the opposition. However, the moment of truth has already occurred. The United States has intensified its activity in Syria. The Western nations have clearly stated they do not see any political future for Bashar al-Assad and his government. They are willing to defend the constitutional process and the political resolution as a whole, as they consider suitable, which Damascus will inevitably boycott.

Moreover, the “small group” on Syria, which the West created as an alternative to the Astana process, requires de Mistura to provide it with a report on the committee formation by Oct. 31. “We know that they put pressure on de Mistura to make him announce a particular list of members of the committee and claim that he does it voluntarily. This will be a grave mistake. All this pressure is aimed at the annulment of any results the Astana process has achieved,” Lavrov said during the press conference. For Russia, this is a complex problem, as the political resolution may come to a dead end just like the Geneva talks. At the same time, the West is likely to run out of patience and increase its pressure on the regime in Damascus. The opposition, with even more support, may ignore Moscow’s requests altogether. In 2019, Russia will face the challenge of escaping this prospect. Moscow will have to simultaneously maintain its influence in the region in the face of pressure and rivalry, defend its interests in Syria and preserve the alliances.