Iran, Turkey and Russia hope they’re all on same page

The three guarantors of the Astana peace talks seek to affirm the stability of the talks as well as the trio itself. 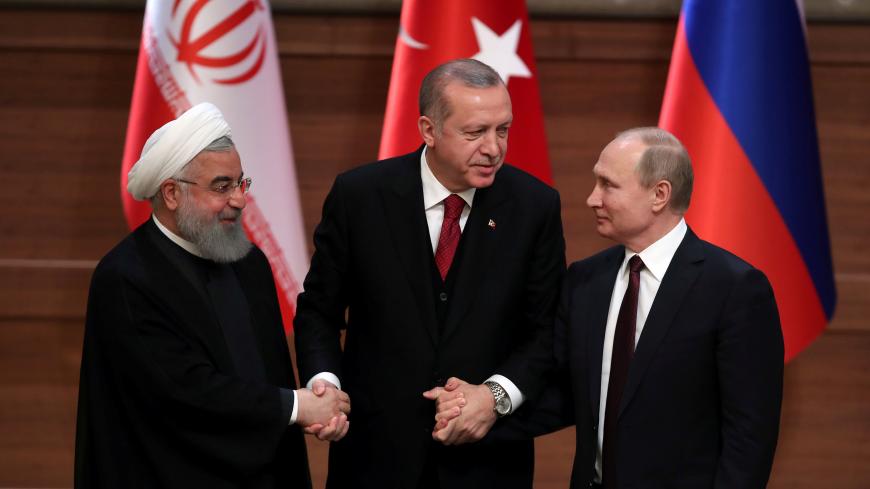 MOSCOW — Thoughts about loyalty, commitment and honesty seem to be pricking the minds of officials involved in Syria peace talks: Turkey’s (few) shared sensibilities with the United States versus Ankara’s loyalty to Iran and Russia; America’s loyalty to armed Kurdish groups versus its promises to Turkey; and everyone’s commitment to peace talks held in Astana, Kazakhstan, versus those taking place in Geneva.

On April 29, the foreign ministers of Russia, Turkey and Iran — the three countries acting as guarantors of the Astana talks — met to discuss Syrian developments for the third time in six weeks and for the first time since the US-led strikes on Syria in mid-April.

Formally, the meeting was mainly about preparing for the ninth round of Syrian peace talks in Astana. But considering Turkey’s support for the US-led attacks, Moscow and Tehran were preoccupied with gauging Ankara’s loyalty to the trio and ensuring the strength of the three-party alliance.

“We agreed to hold this extraordinary meeting at the level of foreign ministers of the Astana format’s countries to discuss this rather complex — highly complex, to be honest — situation in Syria and around it,” Russia's Sergey Lavrov said, opening the talks.

“Somebody probably doesn’t want peace in Syria, as the events of the last several weeks show,” Lavrov said. “Every time when hope shines for a Syrian resolution, this hope is crushed.”

From Russia’s perspective, the United States' and allied forces’ attack on Syria falls in that very category. So do the efforts of the United States, France and the United Kingdom to develop alternative plans for a Syrian settlement that exclude Russia and Iran. Several days before the ministers met in Moscow, such plans were discussed in Washington during a French-American summit.

US President Donald Trump asked Arab nations to support the fight against terrorism in Syria and curb Iran’s expansion ambitions. “As we drive these [Islamic State, or IS] killers from Syria, it is essential that the responsible nations of the Middle East step up their own contributions to prevent Iran from profiting off the success of our anti-[IS] effort,” Trump said during an April 24 news conference.

Trump pointed out that the allies’ every action aims at blocking Iran’s access to the Mediterranean Sea through Syrian territory.

While it’s still not clear whether an Arab coalition will be formed in Syria, Paris is already forging a diplomatic alliance among the United States, the United Kingdom, France, Jordan and Saudi Arabia. The group also has discussed matters with Germany and Turkey, said French President Emmanuel Macron.

He said France is striving to unite all sides interested in a Syrian resolution. Russia has been playing that mediation role for the past year. Macron said France can negotiate successfully with all the parties and the Western-Mideast alliance France is coordinating to bridge the Astana negotiations and the lifeless peace format led by the United Nations in Geneva.

Macron has said he is not convinced that the Astana format in its current form will work, mentioning that it could lead to Syria being partitioned. Ironically, the Astana trio of Moscow, Tehran and Ankara believes that to be true of the efforts of Washington, Paris and London.

At about the same time these meetings were taking place, Staffan de Mistura, the UN special envoy for the Syria crisis, expressed his own view on the Astana format. During an April 24-25 aid conference for Syria in Brussels, de Mistura said, “The initiatives led by Russia have reached their limit.” The Astana trio’s efforts are only further escalating the conflict, he added. De Mistura noted that the January conference held in Sochi, Russia, didn’t result in the formation of a committee on the new Syrian Constitution as it was supposed to.

Lavrov reacted harshly to this statement at a press conference with his foreign minister counterparts, Mevlut Cavusoglu of Turkey and Mohammad Javad Zarif of Iran. Lavrov reminded reporters that the UN had been invited to participate in the Astana talks from the very beginning, and either the special envoy himself or his deputy official had taken part in every round.

According to Lavrov, the UN could significantly help the Astana process “develop effectively in every direction.” Lavrov then basically drew out a potential road map for Syria.

The first part of the plan to achieve, according to the top Russian diplomat, is completing the de-escalation zones called for in the Astana talks.

“The armed opposition groups that are patriotic [and] that want peace in their country should dissociate themselves from the terrorists as soon as possible and oust them from the de-escalation zones,” Lavrov said. He promised that the fight against terrorists in Syria “will be absolutely relentless” wherever they hide.

Lavrov pointed out that the UN, being in contact with all major armed and political groups of the Syrian opposition, could make their leaders understand a simple idea. He said, “Do not mix with terrorists; do not make any alliances with them, even temporary ones based on the current situation.” However, he tactfully avoided mentioning that several armed groups actively cooperate with Ankara and that some of their leaders even currently reside in Turkey.

The second area in which the UN could help is the humanitarian sphere.

“We encourage the UN to avoid the pressure to politicize humanitarian supplies and humanitarian aid as a whole. Also, the UN certainly must not play along with the people who claim that aid should be given only to opposition-controlled areas,” Lavrov emphasized.

The Russian minister expressed his surprise at de Mistura’s words once more, saying, “It is slightly off-putting sometimes when he is being manipulated into criticizing the Astana format and the results of the congress in Sochi.”

In a collective 11-point statement, Russia, Turkey and Iran agreed to have more frequent joint consultations involving high-level representatives, including the UN secretary-general and de Mistura, to facilitate the launch of the Constitutional Committee.

The three ministers described the Astana format as “the only international initiative that has helped [to] practically improve the situation in Syria” and said the next round of talks is planned for mid-May. Also, they declared that an action group session will meet simultaneously in Astana to discuss liberating hostages and prisoners, handing over the bodies of victims and searching for missing people.

In the meantime, the trio rejects “all attempts to create new [conditions] on the ground under the pretext of combating terrorism.”

Moscow is alarmed by what it sees as Washington’s latest attempts to lure Turkey back to the Western camp. On April 18, US Assistant Secretary of State for Europe and Eurasia Wess Mitchell told the House Foreign Affairs Committee that the United States hopes to “enlist Turkey as a more active ally in supporting the Geneva process” and defeating IS, stabilizing Syria and becoming a long-term player in thwarting Russian and Iranian expansion.

In late April, when Turkey’s foreign minister met in Brussels with US Secretary of State Mike Pompeo, they agreed to “take joint steps to eliminate the controversies” in their relationship. One previously discussed step was a supposed agreement to satisfy Turkey’s desire to remove the People's Protection Units (YPG) from Manbij, Syria. The United States has supported the Kurdish group, which helped the coalition fight IS. Turkey, however, says the YPG is affiliated with terrorists.

When Cavusoglu returned to Moscow after meeting with Pompeo, the Russian and Iranian foreign ministers were greatly anticipating a progress report. Yet during a press conference, Cavusoglu dodged direct questions about the YPG leaving Manbij. He did, however, mention America’s past support of the YPG and told listeners the United States has broken promises before.

“In 2016, the [United States] promised that these terrorist organizations would leave Syria. We want Americans to keep their promise and help to return those territories to the civilians living there,” Cavusoglu said.

On this and other Syria-related matters, Turkey is evidently not convinced the United States will keep its word. That’s one reason Cavusoglu is adamant in expressing his loyalty to the Astana talks.

And that’s why Moscow and Tehran hope that — despite their differences with Ankara over which armed groups are “terrorists” and Ankara’s support of the US strikes on Syria — Turkey isn’t abandoning or betraying the Astana trio. As of now, it still appears inseparable.

“With all the diversity in our approaches — which we openly admit — Iran, Russia and Turkey aim all their actions toward finding particular ways of resolving conflict [and] helping Syrians to agree, on their own, on … the methods of transitioning their country to peaceful life and doing this within the framework of principles outlined by the United Nations Charter,” Lavrov summed up.

The trio will undergo a new sustainability test once it starts addressing pre-conditions and picking which armed opposition groups to invite to the next Astana talks. Continuing to cope with these and other settlement-related challenges is going to showcase whether the Astana trio is dead as a negotiations venue or still alive and kicking.