Though the UN has yet to confirm who will serve on Syria's Constitutional Committee, the Astana trio is optimistic about the committee's overall prospects, especially after the United States announced it will withdraw its troops from Syria. 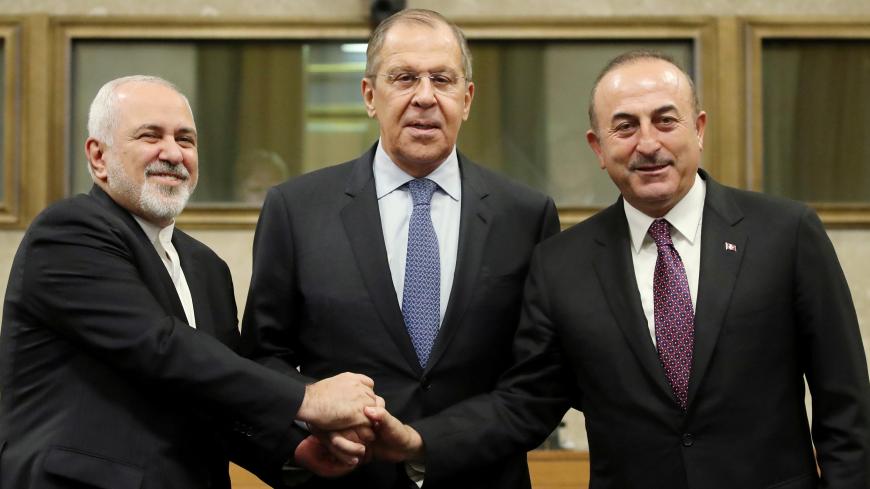 On Dec. 18, in Geneva, the foreign ministers of Russia, Turkey and Iran presented their list of proposed members of the Syrian Constitutional Committee to UN special envoy Staffan de Mistura. The Astana trio had worked on the list for about a year but had not officially presented it. Yet neither the special envoy nor the UN secretary-general were able to confirm whether they were ready to approve the Astana trio's list.

The decision to form a Syrian Constitutional Committee was made in late January, during the Syrian National Dialogue Congress in Sochi. The same congress also decided that the Constitutional Committee would operate on a proportional system. This means that the government, the opposition and civil society will each have 50 delegates. The initial lists of members were prepared by late July and were approved by the Astana nations. Yet de Mistura's list became a problem, as Damascus and Tehran found his suggested candidates unacceptable. The Astana trio thus decided to propose its own list to the UN secretary-general.

On Dec. 18, Foreign Ministers Sergey Lavrov, Mevlut Cavusoglu and Mohammad Javad Zarif arrived in Geneva in a rather good mood. All signs indicated that the efforts to form the committee were coming to a successful end. At the beginning of the summit, Zarif announced that the controversial list of civil society delegates had finally been approved by the president of Russia’s special envoy Alexander Lavrentiev, Turkish Deputy Foreign Minister Sedat Onal and the Iranian foreign minister’s assistant Hossein Jaberi Ansari. The only remaining step was to hand the list to the UN. However, the talks stretched on for six hours, including the lunch break.

It's now clear that, several hours into the meeting, the process had gone awry. Instead of a press conference, only a final statement was to be issued, and the contents of that statement were debated until the last minute. Meanwhile, the pool of UN reporters expressed surprise that, for the first time, de Mistura's office had not warned them that the Astana trio was to meet in Geneva. Up until the last moment, the officials had mentioned nothing more than a “high-level meeting.”

Rumors circulated in Geneva that Western nations had pressured the UN to keep the summit confidential. Later, sources close to the meeting's organizers confirmed this, emphasizing that the United States and its allies wanted to belittle the results of the Astana trio’s work.

The foreign ministers visited Geneva at de Mistura’s request. In a way, it was a “farewell gift” to the envoy before he departs his post. The gift, however, turned out to be a Trojan horse.

According to Al-Monitor’s sources in one of the Astana delegations, the Astana trio's list of proposed civil society delegates is mostly composed of supporters of the Syrian government. Although the list formally meets the requirements of proportional representation, around two-thirds of the committee are likely to fall under Damascus’ control.

Moreover, James Jeffrey, the US State Department’s special envoy for Syria, said before the summit that "Syrian opposition leaders are not yet satisfied" with the Astana trio's list. He said that the international community, including the United States and its partners, will decide whether the committee's composition is acceptable. A source in one of the Astana trio delegations told Al-Monitor there were concerns that Western countries would force the UN to reject the Astana trio's proposed list.

It is only logical that de Mistura looked embarrassed in statements to the press after the talks. He pointed out that the resolution process in Syria is far from over. “There is still an extra mile to go, but we do certainly appreciate the intensive work that has been done,” he said.

There is still a chance that the international community accepts the Astana list as is, though Moscow has no illusions about the West’s position. Several days before the meeting, Turkish Foreign Minister Cavusoglu pointed out that all controversies should be resolved by compromise. He did not explain what controversies in particular. However, as a source familiar with the talks in Geneva told Al-Monitor, the main issue is not who will form the majority on the committee. The core question is whether the committee's work will be based on consensus or the will of a simple majority. Currently, the latter seems most likely.

Another significant question is who will lead the committee and who will be a part of the team that will draft Syria’s new constitution. These problems are just a starting point for the diplomatic battle. It has already taken a year just to devise lists of the committee's members. It’s hard to predict how long it will take to draft a new constitution. However, one should remember that in the spring of 2020, parliamentary elections are due to be held in Syria. A year later, a presidential election is scheduled. The sides have to reach a consensus by this time.

The trio appreciates the dialogue in itself. But, as the Iranian foreign minister tweeted, the West needs to "facilitate; not dictate." If the West does not enforce its decisions, the trio is likely to meet the UN’s requests and find substitutes for certain candidates from the approved list as a gesture of goodwill, though the Astana trio had to go to great lengths to reach compromises with the Syrian government. In any case, all details will be discussed with the UN’s new special envoy for Syria, Geir Pedersen, who assumes office Jan. 7.

New debates could likely hamper the committee’s launch. Though, after the summit, Cavusoglu expressed confidence that the committee's first session will be held as early as January 2019. However, the trio has always highlighted that they would rather not mention precise dates. Yet anything goes so long as the decisions made suit everyone.

The West has usually urged the trio to set a date for the committee's launch as early as possible. However, the Russian leaders, now believing that no one can be frank, blame the Astana nations for failing in the creation of the Constitutional Committee. Russia, Turkey and Iran completed their part of the job. Now, the UN is in charge.

President Donald Trump’s decision to pull out from Syria could be a serious game-changer and significantly impact the UN position on the committee.

“The initiative to establish the Syrian Constitutional Committee has better odds after the US decision to withdraw from Syria,” Russian Foreign Ministry spokeswoman Maria Zakharova said shortly after Trump's announcement.