Russia, US looking for common ground on Syria

US national security adviser John Bolton met in Geneva with Russian National Security Council Secretary Nikolay Patrushev to outline the range of issues the two nations can jointly cooperate on. 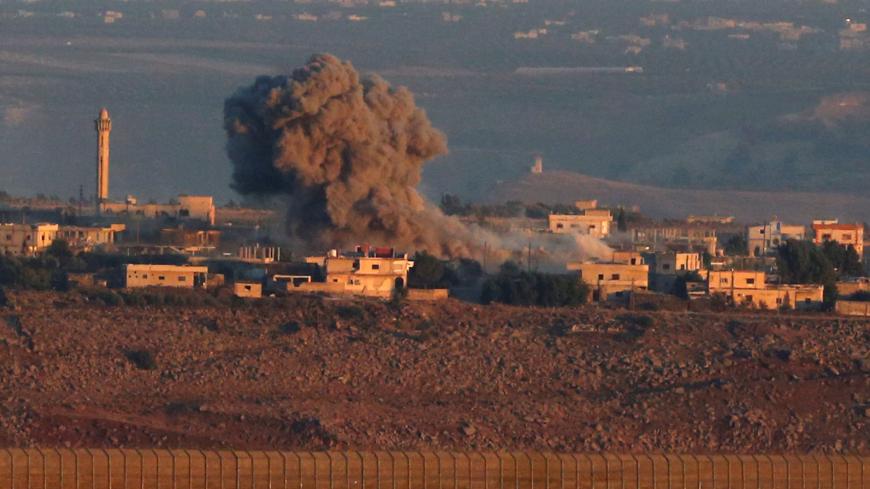 Smoke rises following an explosion at the Syrian side of the Israeli-Syrian border as it is seen from the Israeli-occupied Golan Heights, Israel, July 26, 2018. - REUTERS/Ammar Awad

MOSCOW — US national security adviser John Bolton and Russian National Security Council Secretary Nikolay Patrushev met in Geneva on Aug. 23 for the first high-level meeting of officials from the two countries since the US-Russia presidential summit in Helsinki on July 16. In between the two meeting, US President Donald Trump came under heavy criticism at home for the summit with President Vladimir Putin and because of Trump's remarks at the press conference with the Russian leader. The Helsinki meeting reignited the debate in the United States on dealing with Moscow. And a new round of US sanctions imposed following the Putin-Trump summit has helped the Russian currency, along with the overall bilateral relationship, plummet to new lows.

The Russian Foreign Ministry issued an immediate statement saying a policy of sanctions “is a road to nowhere.”

“No matter how many waves of unilateral sanctions Washington sends (their total number stands at 55), they will never be legitimate. The reliance of US politicians on such restrictions is an attempt to conceal their futility,” the statement read.

A day before the Bolton-Patrushev meeting, Putin called the new American sanctions “pointless” and said they don’t have to do with President Trump but rather “the so-called American establishment.”

“I hope that our American partners will realize that this policy has no future at some point and we can start cooperating in a normal way," Putin said.

Bolton was initially scheduled to go to Moscow for the talks with senior Russian officials. But the pushback in Washington against dealing with Russia caused the US national security adviser and his Russian counterpart seek a more neutral venue for the encounter.

“To restore US-Russia relations we should first learn whether we have points of common ground at all and whether our counterparts have a desire [to seek them],” Kremlin spokesman Dmitry Peskov said.

The Russians had been elaborating the agenda for the talks for more than a month. As a result, Moscow came up with a number of proposals on international security issues, including on Syria, that were to be given to Bolton in Geneva.

“We’ll present quite a few proposals which, I assume, they will accept for consideration for cooperation,” Patrushev said in the run-up to the talks.

Patrushev, 67, is a veteran of the Russian security establishment. He succeeded Putin as a director of the Federal Security Service (FSB) in 1999 and headed the organization until 2008, when he was appointed secretary of Russia’s NSC. Being one of the closest confidants of the Russian president, his mandate as a negotiator on the vital issues is strong. Earlier this year Patrushev was listed on one of the US sanctions lists but said it was not an impediment for him in any way to communicate with American officials.

Deputy Foreign Minister Sergey Ryabkov, who accompanied Patrushev in the Geneva talks, said one of the most critical items on the agenda was the Iranian presence in Syria. Prior to going to Geneva, Bolton traveled to Israel and discussed the issue with Prime Minister Benjamin Netanyahu. While in Israel, Bolton claimed Putin had told Trump that Russia could not compel the Iranians to leave Syria.

“But he also told us that his interest and Iran’s were not exactly the same. So we’re obviously going to talk to him about what role they can play,” Bolton said.

“We’re going see what we and others can agree in terms of resolving the conflict in Syria. But the one prerequisite there is the withdrawal of all Iranian forces back in Iran,” he added.

Trump’s national security adviser made it clear why the White House believes it has leverage over the Kremlin over Syria, saying, “The Russians are stuck there [in Syria] at the moment … they’d like to find somebody else … to bear the cost of reconstructing Syria — which they may or may not succeed in doing.”

The Kremlin snapped back shortly. “It is not correct for anyone, let alone our counterparts in Washington, to claim that Russia is stuck someplace, Let us not forget that US military personnel are present on Syrian soil, too. This should be borne in mind," Peskov said.

Patrushev and Bolton sat together for five hours and did not issue a joint communique, which the Russians said had been originally under consideration.

"Americans wanted to include a point on interference from us in their elections that they believe [took place] and we deny. It’s a weak topic for discussion. We, in exchange, suggested they include a point on the unacceptability of interference in other countries’ affairs but the Americans said they wouldn’t sign such a document,” Patrushev said after the talks.

Despite the thorny issues, Moscow assessed the talks in Geneva as “constructive.” Patrushev invited Bolton to Moscow “or any other Russian city” for the next round of consultations, the date for which has not been set. Patrushev gave Bolton a set of Russian proposals on further cooperation that he said Washington will take time to review.

On the Middle East track, the issue of Iran and Syria appears to have been the most contested. The United States waved off a Russian proposal on the pullback of Iranian forces in Syria in exchange for softening sanctions on Tehran.

The discussion wasn’t much better on on the use of chemical weapons in Syria. The United States had said earlier that it is concerned about the situation in Idlib and promised a strong response if a chemical attack ordered by Syrian President Bashar al-Assad takes place. The Russians, for their part, fear this could be a pretext for yet another strike on Syria following a militant provocation.

“We’ve seen a similar pattern of American behavior in Syria. First they threaten to use force over such incident — and a few days after a chemical attack happens the West launches strikes — so we are very concerned that such a fragile situation such as in Idlib is now being discussed in this way,” a senior Russian diplomat told Al-Monitor on condition of anonymity.

“Strong differences remain between us. But we’ve also made some progress on a range of issues such as arms control, where we started serious talks on the prolongation of the START III. The best deliverable this far is we’ve been able to go down the list of things we can work together on, where our respective agencies could be practially interacting,” he said.

Dmitry Suslov, the Moscow-based deputy director at the Center for Comprehensive European and International Studies at the Higher School of Economics, said the results of the meeting are not surprising. This includes a lack of progress on key issues and contradictions, but commitment to maintaining and even rebuilding dialogue.

“The declared expansion of regular talks between defense ministries, expected continuation of national security council dialogues, as well as the scope of Geneva negotiations, which covered all the major aspects of the US-Russia relations agenda (strategic stability and arms control, Syria, Iran, Ukraine, etc.) mean that US-Russia relations are cautiously moving towards the 'manageable confrontation' model, overcoming the 'unmanageable confrontation state that prevailed' [the] last year and a half. If Republicans keep (at least partial) control over Congress after the forthcoming midterms, and Trump’s political positions continue to strengthen, this 'manageable confrontation' model will consolidate itself for the next two years,” he told Al-Monitor.

On Syria and Iran, Suslov said, the US approach “remains hard-line.”

“[Washington] seems to expect Moscow to make unilateral concessions, which is unlikely to happen. Still, the sides’ commitment to stronger dialogue is a positive sign,” he concluded.