US President Donald Trump may want to learn lessons from previous presidential encounters with Saudi kings if he wants his trip to visit King Salman to be a success. 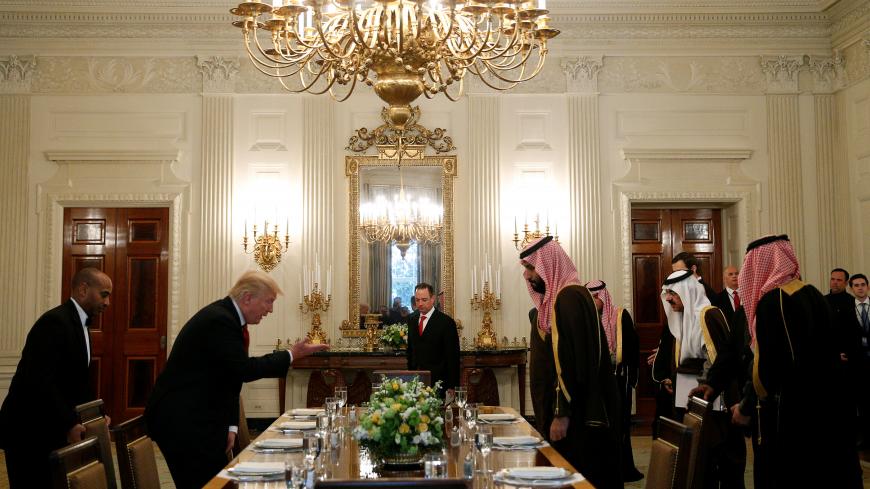 US President Donald Trump and Saudi Deputy Crown Prince and Minister of Defense Mohammed bin Salman take their seats for lunch in the State Dining Room of the White House in Washington, March 14, 2017. Trump will visit Saudi Arabia this month. - REUTERS/Kevin Lamarque

US President Donald Trump's decision to make Saudi Arabia his first foreign stop on his first trip abroad reflects the importance his administration has given to courting the Saudis. There are useful lessons to be learned from previous presidents' trips to the kingdom about how to successfully court the royal family.

The first American president to seek Saudi support was Franklin Delano Roosevelt. He began by inviting two of King Ibn Saud's sons, Princes Faisal and Khalid (both future kings), to the White House in 1943 where the fundamentals of the American-Saudi relationship were agreed upon. On Valentine's Day 1945, FDR met with the king face to face on a US Navy cruiser, the USS Quincy, in the Suez Canal just after the Yalta summit. That moment is the cornerstone of the relationship.

FDR was careful to avoid any offense. He sent his daughter to Cairo for a day of shopping. A chain smoker, the president did not smoke in front of the king; instead he grabbed a quick puff in the ship's elevator on the way to lunch alone. In his discussion, FDR did well when he stuck to the big picture of strategic cooperation. When he pushed for the king to back a Jewish state in Palestine, Ibn Saud was firmly negative. The Jews should have a state carved out of Germany since they were responsible for the Holocaust. Hitting a stone wall, FDR dropped the subject.

When he learned that FDR was to meet Ibn Saud, British Prime Minister Winston Churchill insisted on his own meeting in Cairo. Churchill smoked and drank alcohol throughout the lunch. The meeting was a disaster. The British moment in the Middle East was over.

The first American president to visit the kingdom was Richard Nixon in the last days of the Watergate scandal. He was desperate for a big diplomatic deal to save him from impeachment. King Faisal, who has just lifted the 1973 oil embargo that had sent America into a recession, instead lectured Nixon on the evils of Zionism and the need to return East Jerusalem to Arab and Muslim rule. Nixon left empty-handed.

President George H.W. Bush fared much better traveling on Thanksgiving 1990 to discuss the upcoming Operation Desert Storm to liberate Kuwait with King Fahd. Bush assured Fahd that once Iraq was defeated he would turn to organizing a multinational conference to address the Arab-Israeli conflict, including the Palestinian issue. The Madrid conference followed in 1992. Bush senior is still highly regarded by the royal family.

Ironically, Barack Obama probably courted the Saudis more than any president since Roosevelt. He certainly sold them more arms than any other president. The kingdom was his first stop in the Middle East in 2009. The visit went poorly. Obama asked for a commitment from King Abdullah to open direct contact with Israel to help facilitate a renewal of the peace process. Abdullah outright refused. Obama thought his staff had worked a deal with the Saudis to take prisoners from the Guantanamo Navy base; the king said he knew nothing about such a deal. By trying to transact business rather than focus on building a personal relationship first, Obama got off to a bad start. It only got worse over time. The new king, Salman, stiffed Obama when he was first invited to America.

The Saudis are planning three events for this month's Trump visit. First is a session with the king and his court, then a meeting with the leaders of the Gulf Cooperation Council and finally a meeting with other Muslim leaders and representatives. It is a demonstration of the Saudis' convening power and broad influence. The custodian of the two holy mosques, as they style themselves, has huge soft power in the Islamic world.

Iran is Salman's top issue. This month, Saudi Defense Minister and Deputy Crown Prince Mohammed bin Salman gave an interview condemning Iran in extremely harsh sectarian terms. The prince, the king's favorite son, characterized the Iranian Islamic Republic as being driven by messianic prophecies and determined to dominate the entire Islamic community. He claimed that Iran sought to take control of Mecca from the kingdom. There was no room for dialogue with Tehran, according to his statement. Indeed, the prince promised that the kingdom will fight its war against Iran inside Iran, not in Saudi Arabia. He was vague about what that means, but it suggests he supports regime change in Tehran. It was one of the most virulent public attacks on Iran ever by the House of Saud.

The royal family is eager for American support against Iran in Yemen, Syria and Iraq. The Saudi leaders face a more skeptical domestic audience. The new Trump administration is widely seen by the public in the Arab world as an enemy of Islam. A poll of Saudis in November showed overwhelming support for Hillary Clinton and only 6% for Trump. There will be no demonstrations against the president in a police state, but the palace will not want to be seen as failing to defend Muslim rights, especially when it comes to Jerusalem.

There will be agreement on fighting terror, including al-Qaeda and the Islamic State. Behind the scenes, the Saudis will want some administration action to prevent legal action against the kingdom via the Justice Against Sponsors of Terrorism Act (JASTA). Numerous lawsuits have been filed alleging Saudi responsibility for 9/11. The Saudis will note that the CIA just awarded Crown Prince and Interior Minister Mohammed bin Nayef the George Tenet medal for fighting terrorism. How can a medal winner be a sponsor of terror?