Saudi Arabia's hope to exit the Yemen scene could depend largely on Ali Abdullah Saleh and the Yemeni rebel factions' falling apart. 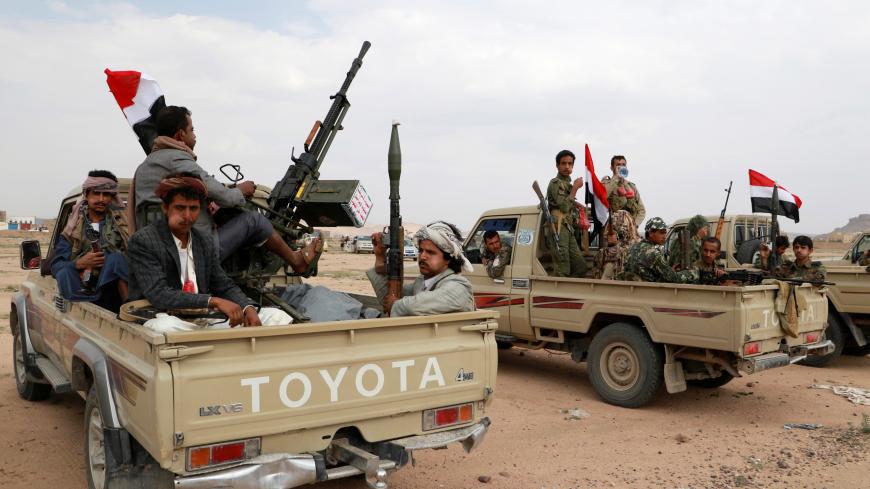 Houthi fighters ride on the back of trucks as they parade in the northwestern city of Saada, Yemen, before heading to the capital, Sanaa, Aug. 23, 2017. - REUTERS/Naif Rahma

Saudi Arabia is hoping the Yemeni rebel alliance is fracturing, which could open the door for the Saudi alliance to escape the quagmire Riyadh is stuck in. It's a long shot, and not a viable strategy for Washington.

The Zaydi Shiite Houthi rebels aligned with former President Ali Abdullah Saleh, 75, three years ago to seize Sanaa from the collapsing government of his onetime deputy and successor Abed Rabbo Mansour Hadi. It was a strange and awkward alliance from the start. Saleh, also a Zaydi, had waged war against the Houthis for a decade before the Arab Spring, often with Saudi assistance. The Houthis backed Saleh's removal from power in 2012 — this time with Saudi assistance. In 2015, the two rivals saw a convergence of interests to oust Hadi and take control of North Yemen. At first it was a clandestine partnership until the full extent of Saleh's betrayal of his former deputy, and the Saudi-engineered deal that put Hadi in power, became apparent.

The Saudi relationship with Saleh goes back to the early 1960s when he backed the pro-Egyptian coup that plunged Yemen into civil war for years, pitting the Egyptian-backed republicans against the Saudi-backed royalists. Saleh got his combat training fighting the Saudis and the royalists, taking power in a coup in 1978. Twelve years later he united North and South Yemen, but then backed Iraq and Saddam Hussein in the Kuwait crisis. The Saudis swore revenge and threw a million Yemeni workers out of the kingdom.

In 1994, the Saudis engineered the south Yemenis' secession from Saleh's united Yemen by backing the former communists who had lost power in unification. With the help of jihadi groups, Saleh outfought the southern rebellion, restored unity and humiliated the kingdom. It was a very bitter pill for the Saudis.

During the last 2½ years of the new civil war, Saleh and the Houthis have been wary partners. Saleh has quietly tried to keep his options open, using his son Ahmed, who travels often to Abu Dhabi. It is characteristic of Saleh, the man who described ruling Yemen as the equivalent of dancing on snake heads. He is hoping to use divisions within the coalition between Saudi Arabia and the United Arab Emirates against Hadi, essentially playing the Emiratis. Reportedly, he is in touch with Emirati Crown Prince Mohammed bin Zayed and Saudi Crown Prince Mohammed bin Salman. It is the trademark of an unscrupulous dictator who has misruled his country for decades.

For months, the simmering divisions within the rebellion were kept under the surface but sufficiently restive to give the Saudis and their allies — including some in US President Donald Trump's team — hope that the rebels will fight each other. Last month, a clash did break out and a senior Saleh bodyguard was killed. Briefly, Saleh was under apparent house arrest in Sanaa, but then he appeared conciliatory in public to the Houthis. Still, he has called for tribal revenge for his lieutenant's death. Sanaa is now divided between the two camps, with the Houthis holding about 70% of the capital and most of the north. More violence is all but certain; whether it can be contained is an open question.

The war itself has escalated this year and become even more expensive for Riyadh. Flight operations by the Saudi air force and its partners have soared. According to the United Nations, there were 5,766 airstrikes by the coalition in the first six months of 2017, compared with 3,936 in all of 2016. Fighting on the ground has increased, too. In addition, the rebels continue to develop medium-range missiles with Iranian help to target Saudi cities.

So a war within the rebel camp has a potential for dividing the kingdom's enemies. Some senior Saudi officials have told their American counterparts that this may be their best chance to end the war on favorable terms. The Saudi media eagerly reports news of conflict between the rebel factions. The irony of the Saudis' depending on Saleh for their salvation is rich poignancy.

Thoughtful Saudis are deeply skeptical about Saleh, doubting that he will really be prepared to support the restoration of Hadi's government, even if it is rearranged to broaden its appeal. The alternative of turning back the clock to 2012 and putting Saleh or his sons in power is even less appealing. At best, the clash within the rebel camp will turn the conflict into a three-sided civil war that could go on without end. The worst outcome for the Saudis would be if the Houthis quickly routed Saleh's supporters and consolidated their control of the rebellion. The two camps may also remain united despite their differences and contain occasional flare-ups of violence.

Cynics can argue that the real strategy of the Saudi coalition is to rely on starvation and disease to wear down the Yemeni people. The United Nations has labeled the war the worst humanitarian catastrophe in the world; malnutrition and cholera are epidemic, and the fragile infrastructure of the poorest Arab state is being systematically destroyed by the wealthiest Arab states. The world has largely ignored the problem, not wanting to take on the oil-rich coalition.

The Saudi counterargument is that they have pledged large sums of money, $8.2 billion, to aid and relief efforts in Yemen. While true, the aid is a Band-Aid on a chest wound. It does not balance the damage done by the blockade of Yemeni ports and airfields.

The urgent necessity is an unconditional cease-fire supervised by the UN. The blockade should be lifted. The United States and the United Kingdom, whose support is essential to the Saudi air force, should sponsor a UN Security Council resolution unlinked to previous pro-Saudi resolutions demanding all parties immediately and unilaterally cease military operations or face sanctions, including a halt to all arms sales and transactions. The United States and Britain cannot escape culpability for their role in the war as the armorers of a brutal air war and blockade.

Iran is the only winner, as it provides aid and expertise to the Houthis at a tiny fraction of the cost of the Saudi war effort while the Islamic Republic's Gulf enemies spend fortunes on a conflict they jumped into with no endgame or strategy. Saleh is an unlikely savior.