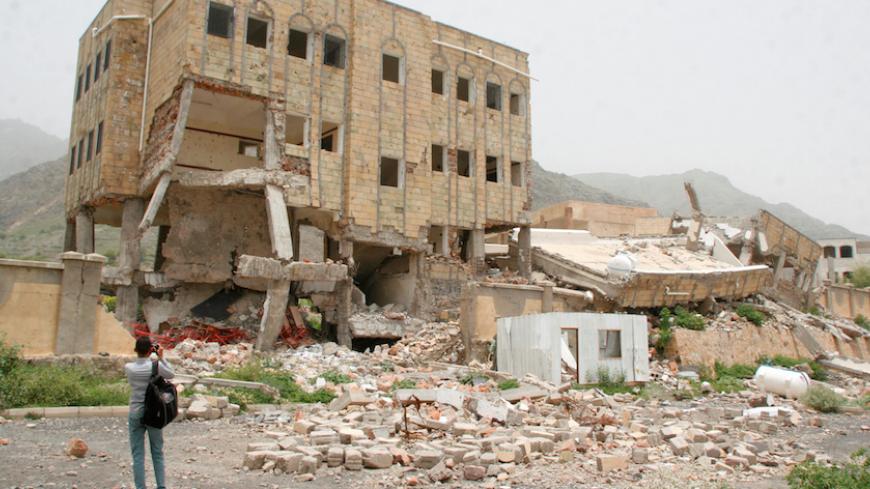 A journalist takes photos of a school destroyed by a Saudi-led airstrike in the southwestern city of Taiz, Yemen, July 27, 2016. - REUTERS/Anees Mahyoub

The war in Yemen continues to take a terrible toll as UN-mediated peace talks remain stalled, and a fragile cessation of hostilities, barely a week old, is already collapsing.

Doctors Without Borders reported Aug. 13 that at least 10 children were killed and more than 20 injured in an airstrike on a school, which the Houthi-led Yemeni faction in the civil war, which is backed by Iran, blamed on the Saudi-led coalition.

Four days earlier, Julien Harneis, the UNICEF representative in Yemen, had said, “Children are paying the heaviest price of the conflict in Yemen.” UNICEF has verified that more than 1,100 children have been killed and another 1,600 injured since March 2015, although “the actual numbers are likely to be much higher,” according to Harneis.

Bruce Riedel explains that Saudi Arabia may be reaching a “critical decision point” in Yemen. The war is costly and Saudi defense expenditures are the third-highest in the world. Escalation is an option, but would be costly, including for the international standing of the kingdom, which has been criticized for its conduct of the war. Riedel reports, “Some commentators in the kingdom are suggesting a fallback option for the war. Riyadh would accept a partition of the country, leaving the Houthis in charge of the north indefinitely while a pro-Saudi southern state gets international legitimacy. This south Yemen state would become a member of the Gulf Cooperation Council. Saudi Arabia would have de facto control of the crucial Bab al-Mandab Strait in such a scenario. It would be a long-term means to contain the Houthi challenge.”

Or, as Riedel concludes, the kingdom may be to muddle through, as King Salman bin Abdul-Aziz Al Saud remains on an extended vacation in Morocco, perhaps tied to health issues. “The easiest choice for the kingdom,” Riedel writes, “is to muddle along and make no decision. The monarchy would refuse any transitional government and emphasize that the war has prevented an Iranian takeover of Yemen. Playing the Iran card keeps up public support for the war and rallies the bulk of the Gulf Cooperation Council behind it. It greatly exaggerates the Iranians' role in Yemen, but that is not the question for the king. He can use an Iranian threat indefinitely, knowing Tehran will engage in enough mischief to justify Saudi and Gulf fears.”

Saudi-Iranian relations are in a bad place. Riyadh and Tehran are on opposite sides of the war in Syria, as well as in Yemen. Zahra Alipour reports that a new Iranian film about the stampede in Mina on Sept. 24, 2015, during the annual hajj pilgrimage, when more than 700 Iranians were killed, will likely further exacerbate bad relations. Iranians blame the Saudi government for the stampede.

Last month, Brig. Gen. Mohammad Ali Jafari, the commander of the Islamic Revolutionary Guard Corps, referred to the two Gulf powers as “clear enemies,” as Arash Karami reported. Jafari’s remarks followed the participation of Saudi Prince Turki bin Faisal Al Saud, the former head of Saudi intelligence and ambassador to the United States, at a Paris rally of the Mujahedeen-e-Khalq (MEK), an Iranian opposition group that calls for the overthrow of the Islamic Republic.

Palestinian President Mahmoud Abbas also met with MEK leader Maryam Rajavi on July 30, perhaps at the behest of Riyadh and as a sign of deteriorating ties between Iran and Abbas’ Fatah faction, as Marian Houk reports. Abbas had sent three envoys to Tehran in order to get Iran to back off its support for Hamas. The Palestinian fault tine may be increasingly treacherous as Saudi-Iranian hostilities continue to escalate.

Mohammad A. Salih reports that a slick new recruitment video by the Islamic State (IS) seeks to enlist Kurds to join their cause.

Salih reports that there are maybe 500 Kurds among the estimated 27,000-30,000 foreign fighters on the side of IS in Iraq and Syria.

“The Kurdish militants accuse Iraqi Kurdish leaders Massoud Barzani and Jalal Talabani of collaborating with the West and Israel. Branding current Kurdish leaders as tyrants, IS calls on Kurds to join the organization because, as the representative of monotheism, it will eventually triumph,” Salih writes.

The appeal of IS to the Kurds has fallen flat, and may be a sign of the terrorist group’s desperation as it continues to lose ground in both Syria and Iraq. Iraqi Kurdish peshmerga and Syrian Kurdish groups, especially the People’s Protection Units, which is at the core of the US-backed Syrian Defense Forces, have been among the most effective fighters against IS.

“Perhaps the most interesting feature of the new IS video release is that it is entirely in the Kurmanji dialect, which is spoken by Kurds in Turkey, Syria and parts of Iraqi Kurdistan. This stands in contrast to the group's previous Kurdish-language propaganda videos, which have used mostly, if not entirely, the Sorani dialect, spoken by the majority of Kurds in Iraq and Iran. Kurds still lack one standardized language, and texts produced in Kurdish are either in Kurmanji or Sorani, which are the two main dialects of the Kurdish language,” Salih writes.

“Julian Pecquet and Abigail Kukura have sifted through hundreds of lobbying and financial records to bring you the most comprehensive resource available on Middle East lobbying in Washington. Throughout the month of August, we’ll be revealing the who, the why — and the how much — discreetly guiding all aspects of foreign policy, from weapons contracts and foreign aid to trade deals and financial sanctions.”

Last week, the series focused on the countries of North Africa. Morocco, which expelled the United Nations mission to the Western Sahara in March, spent $3.7 million in 2015 to press its case for sovereignty over the region, as well as to assist with other economic and defense priorities. “Team Morocco” includes a “former US ambassador to Morocco (lobby shop CEO Edward Gabriel); one former assistant secretary of state (Roger Noriega); and two former members of Congress: Democrat Edolphus Towns of New York and Republican Lincoln Diaz-Balart of Florida.”