King Salman's recent reshuffling of key positions and statements by the grand mufti and Iran's supreme leader point to strife between Iran and Saudi Arabia. 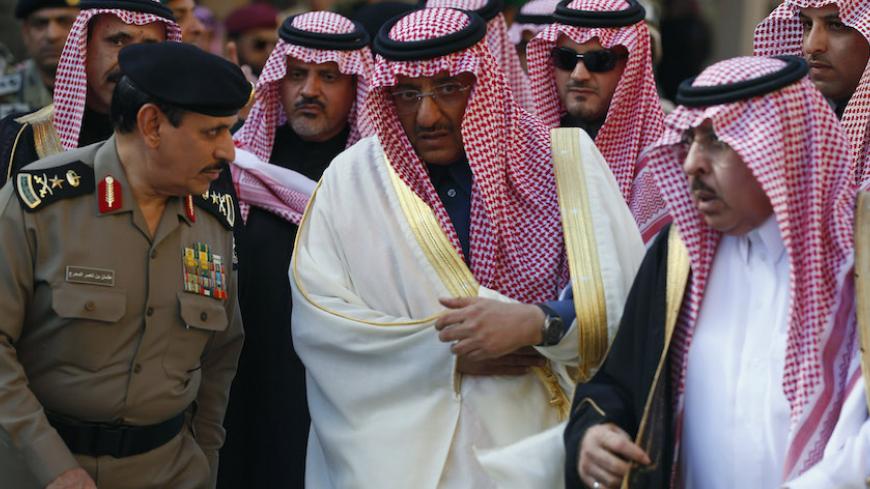 Today’s Middle East, basically a battlefield between two opposing powers, is for many becoming an impossible place to live. Saudi Arabia and Iran are engaged in a series of proxy wars causing endless problems among Muslim states and the grassroots, where de facto animosity is increasing on both sides of the war front. Sectarianism is proving itself the only language spoken, but it is also clear that the heart of the struggle is political and involves history imported from hundreds of years ago to the present.

Yemen is the struggle’s newest arena. There the Saudis are leading a coalition arrayed against Iran’s close ally, Ansar Allah, the movement led by Abdul-Malik al-Houthi, the Zaydi Shiite leader and descendant of a family from Saada, near the Saudi border. Over the course of a few months, forces led by Houthi advanced to the Yemeni capital, Sanaa, and the southern capital, Aden, forcing Saudi-backed President Abed Rabbo Mansour Hadi to step down. The Houthis view him as the main hurdle to national unity.

With the war ongoing, people awoke April 29 to news of a political reshuffling in Saudi Arabia: a new crown prince, Mohammed bin Nayef, also the interior minister; a new second-in-line, Mohammed bin Salman, the defense minister; and a new foreign minister, Adel al-Jubeir. The appointments were interpreted as a major shift and raised questions about possible changes in Saudi Arabia's domestic and foreign policies, including Riyadh’s battles with Tehran.

Abdullah al-Shammari, a former Saudi diplomat and columnist, and Mohammed Marandi, head of Tehran University’s world studies faculty, expressed pessimism about the future when asked their thoughts on the shuffle and whether there might be a chance of Saudi-Iranian tensions being contained.

Marandi stated, “Changes in [Saudi Arabia] are seen here as a major sign of weakness and a major split within the Saudi ruling family.” He also said, “Since Saudi Arabia is not a state with a civil society that can play a role in policymaking, everything is confined within the royal family, and a split within could lead to serious problems in the future. This comes at a time when the Saudis are making more enemies in Yemen, Iraq and Syria. They are surrounding themselves with enemies as a result of their policies.”

In an April 19 speech, Iran’s supreme leader, Ayatollah Ali Khamenei, had referred to Saudi Arabia being led by “inexperienced young people" who had replaced patience and self-restraint with savagery in conducting foreign policy. The new foreign minister, Jubeir, had been the subject of an alleged Iranian assassination attempt in Washington in 2011. Tehran denied the accusation, but the controversy nonetheless raised tensions between the two countries.

Shammari told Al-Monitor, “Riyadh was strategically patient with Tehran, yet the [Iranians] left Saudi Arabia with no choice but indirect confrontation in the Arab countries where Iran has intervened, including Yemen.” He added, “Everyone knows that Iran’s involvement is catastrophic, and Iraq is a good example.” The former diplomat warned, “The new generation of the Saudi ruling elite practices less self-restraint than the older generation. They are backed not only by the religious institutions, but also by the main Saudi liberal personalities and the popular base. All of them want to draw red lines on Iran.”

Saudi Arabia’s grand mufti, Sheikh Abdul-Aziz Al al-Sheikh, on April 20 called on Iran to stop attacking Saudi Arabia. He said that Tehran’s interference in Arab affairs is a crime and should be stopped. “They are dividing the nation, and their policies are making them enemies to the Arabs,” he claimed.

Commenting on the mufti’s statements, Shammari observed, “This is a turning point. The Saudi religious institution for the first time, the mufti, is calling on the country to confront Iranian interference.” The former diplomat said the only solution is for Iran to make the decision to stop interfering in Arab and Gulf affairs, concluding, “Saudi Arabia won’t take a step back and bet once again on diplomacy and dialogue. Confidence in Iran is lost, and their rigid position ended all possibilities for talks. The ball is in the Iranian court. They started all this and never thought of dealing with Gulf countries the way they used to deal with them.”

“Iranians don’t think that the fault is with Tehran,” Marandi said. “Bombing Yemen is from the Iranian perspective the greatest foreign policy blunder that the Saudis have ever made. It has created a hatred among the Yemenis that is unprecedented in recent times toward the Saudis, and Yemen is a large country. Yemen isn’t Bahrain. All this together has weakened the Saudi position.”

Marandi added, “The main problem in the region is Wahhabism. It is not Sunni [versus] Shiite or Arab-Persian or Turkish-Kurdish. It is basically the Saudi vision that has been promoted for decades and led to crisis all around the world.” Ticking off a list of Islamic extremist groups, “Boko Haram, al-Qaeda, Ansar al-Sharia, al-Shabab, Daesh [Islamic State], in China and Central Asia,” Marandi reiterated, “It’s the Saudi advocacy of Wahhabism at the regional and international level, and this is why we are seeing all this havoc in Libya, Syria, Iraq and other countries.”