With a nuclear deal in hand, Iran is focusing on jump-starting regional diplomacy and dealing with Syria. 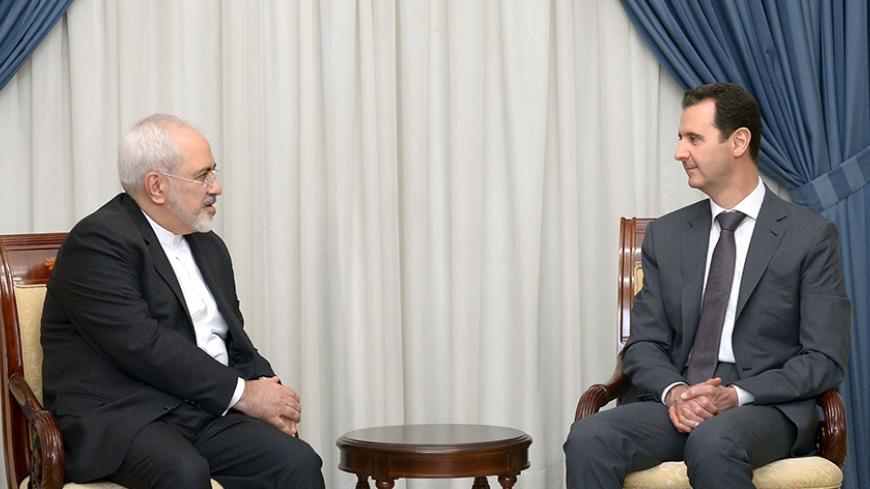 Until last month, the impression among Iran experts was that Foreign Minister Mohammad Javad Zarif is not directly involved in his country’s Middle East policy, with his full concentration on reaching a nuclear deal with six world powers.

With a deal in hand, Iran’s Middle East policy appears to be going through some changes. According to an Iranian official who spoke to Al-Monitor on condition of anonymity, much attention will now be given to diplomacy in the region. He said, “Every problem has a solution and the nuclear issue proved that. Therefore, it is important to come out with some creative ideas to end the bloodshed in the region.”

The official said Zarif “went to Lebanon and Syria to discuss how Iran could play a positive role in solving the crises in both countries, and also crises affecting them.” He added that Iran’s revised four-point plan for Syria was a “main point” in the talks.

Meanwhile, a source close to Lebanese parliament Speaker Nabih Berri has told Al-Monitor that Zarif expressed a willingness to help bridge gaps among the Lebanese about their presidential election. “Mr. Zarif made it clear from the beginning of the meeting that Iran respects Lebanon’s sovereignty and that no one should interfere in Lebanon’s internal issues, yet his country is ready to play a role if asked in helping the Lebanese elect a president.”

However, Al-Monitor has learned that Zarif’s main focus was his meeting with the Hezbollah secretary general. Zarif saw Hassan Nasrallah to brief him on the nuclear deal, share thoughts on the Iranian initiative on Syria and hear Nasrallah’s view of the regional situation.

Zarif knows well that the road to any solution in Syria will go through Nasrallah, given Iran’s confidence in the man and his organization’s role in Syria, seen by many as vital for the Syrian regime’s survival and Iran’s influence in the Levant.

Mohammad Marandi, the head of Tehran University’s Faculty of World Studies, told Al-Monitor the visit aimed to send several messages in different directions. He said, “It is clearly a sign of the [Hassan] Rouhani administration's strong support for the Resistance and [Syrian] President [Bashar] al-Assad, especially since this trip came shortly after a trip to both Syria and Lebanon by another key minister.” Marandi added, “It is also an attempt to find a solution for Syria and isolate Saudi and Turkish-funded Wahhabi extremists.”

Zarif’s Damascus stay, which followed his Lebanon visit, was brief. His meeting with Assad was geared at getting maximum input from the Syrian side — he had met with his Syrian counterpart just days earlier in Tehran — in order to finalize the drafting of the revised Iranian initiative on Syria.

Iran’s Deputy Foreign Minister for Arab and African Affairs, Hossein Amir Abdollahian, told Al-Monitor, “President Assad suggested some constructive ideas to maintain the political process and combat terrorism,” underscoring, “We have to look for solutions that don’t contradict international law and add to the region’s complications, such as the Turkish attempt to establish a safe zone in northern Syria.”

Abdollahian, who accompanied Zarif, emphasized, “The region’s security will be preserved when some regional players stop using terrorism and express their seriousness about combating extremism.” He further revealed, as suggested by Zarif in an Aug. 3 op-ed for As-Safir, Iran and the six Gulf Cooperation Council states “will meet and discuss common concerns in the G7 dialogue forum.” The “G7” refers to Iran and the six GCC states. Abdollahian said this was agreed on with the emir of Qatar, who took the initiative. However, the Iranian deputy foreign minister also revealed an important Omani role: Apparently it was Omani Foreign Minister Yusuf bin Alawi who first proposed this idea. Of note, Oman played an important role in ensuring progress in the nuclear negotiations by facilitating back-channel contacts between Iran and the United States.

Abdollahian further revealed that the first phase of “G7” talks should begin next month, adding that the dialogue might take place anywhere in the region.

Some politicians in Tehran suggest that Zarif’s quest to handle Middle East policy his own way won’t be easy. They believe that given the regional circumstances, it will be hard to craft a new approach. And with Zarif bent on forging ahead with his own style, some internal controversy is certain. However, Zarif has already jumped to the forefront by publishing articles, adopting savvier discourse and trying not to mix revolutionary manners with acts of state.

For example, many were surprised that Zarif did not visit the tomb of Imad Mughniyeh, Hezbollah’s slain military commander, as he has done previously. Of note, Hezbollah said the Iranian foreign minister’s tight schedule prevented him from making the trip, though no Iranian official has missed the stop since 2008, when Mughniyeh was assassinated.

Despite all this, some critics cast doubt over Iran’s seriousness about a diplomatic solution to the Syrian crisis. They believe Tehran is buying time to secure more gains on the ground, and that its only aim is to preserve Assad's rule.

However, this position is increasingly disputed. “There is no doubt that there’s an Iranian will in reaching a political solution in Syria,” former Saudi diplomat Abdullah Al Shammari told Al-Monitor. “The primary reason behind this is the weak position of its ally Assad, and the second reason is that post-nuclear deal, Iran wants to concentrate on its economy and introducing itself as an example for the whole region in terms of diplomacy.” Al Shammari asked, however, “What’s the Iranian definition for a political solution in Syria? What are the limits of Iran’s ability to maneuver as its ally is losing more ground? Iran is more than [ever] serious about preserving its interests, the same interests it has fought four years to keep safe.”

Marandi, the Tehran University professor, brought up another dimension of the renewed push for diplomacy: “Now that things are different, with Saudi Arabia facing many problems in Syria and Yemen, they started talking about political solutions.” Striking a positive note, Marandi concluded, “Iran believes that if Syrian reconciliation makes progress, the bulk of the local and smaller groups will lay down their arms and even join the Syrian state in confronting [Jabhat al-Nusra] and [the Islamic State].”