What’s behind Zarif’s visit to Beirut?

An Iranian diplomat shared with Al-Monitor some behind-the-scenes information regarding the Iranian foreign minister’s visit to Beirut and its implications for Lebanon and the region. 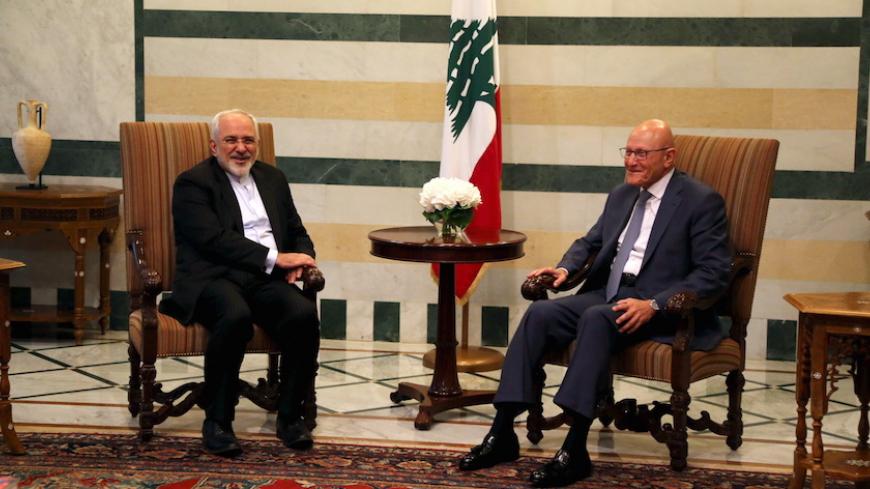 Although his visit to Beirut was short, analysts are still tackling the meanings and messages behind Iranian Foreign Minister Mohammad Javad Zarif’s visit to the Lebanese capital Aug. 11-12. Zarif was no longer a mere ordinary guest, given the role he played in reaching a nuclear agreement between his country and the five permanent members of the UN Security Council plus Germany (P5+1). Iran is also no longer an ordinary Middle Eastern country following the nuclear deal that added a growing regional and international dimension to its role.

During the nearly 24 hours that Zarif spent in Beirut, he met with Lebanese Prime Minister Tammam Salam, parliament Speaker Nabih Berri, Foreign Minister Gebran Bassil, Defense Minister Samir Mokbel and a delegation representing Palestinian factions officials residing in Lebanon. Add to this the habitual visit carried out by all senior Iranians visiting Beirut, namely to Hezbollah Secretary-General Hassan Nasrallah. This visit receives little media coverage, takes place at night and is always made public by a statement issued by Hezbollah accompanied by images published by its media offices alone.

Based on Zarif’s meeting with Nasrallah, Al-Monitor asked a senior Iranian diplomat who accompanied Zarif in the various Lebanese meetings about the real reasons behind the visit at that particular time. The diplomat, who requested anonymity, said that it is well known that Zarif’s visit to Beirut had been planned as part of the minister’s Middle East tour. The tour was supposed to start in Ankara, continue to Beirut and reach Damascus. However, the first visit was postponed due to lack of time, and Zarif immediately landed in Lebanon.

The Iranian diplomat explained that the explicit and official goal of the visit was to officially present the Iranian initiative on the Syrian crisis to officials in Damascus, as well as to inform Turkish officials of its content and discuss the initiative with them, given that Turkey is largely involved in the Syrian war.

The Iranian initiative toward Syria can be summarized in four points: imposing an immediate cease-fire, setting up a Syrian national unity government, rewriting the Syrian constitution in a way that would reassure the different ethnic and sectarian groups and carrying out elections under international supervision.

Meanwhile, the diplomat said that Zarif's visit held a dual message — the first confirming Iran’s keenness on stability in Lebanon, and the second stressing Iran's ongoing support for its friends and allies in Lebanon.

The diplomat said, “There are some who said that rapprochement between Iran and the West after the nuclear deal will lead to a gradual distance between Tehran and its traditional friends in the region and the world. [Others said that] Iran’s achievements at the Western level in terms of recognition and openness will lead it to back down from supporting its allies and friends in the region. Zarif’s visit was aimed at responding to these claims in particular and emphasizing that Iran still stands by the same positions and principles and that these shall remain the same as those before the agreement.”

The meetings held by Zarif in Beirut were not random. In addition to the protocolary official meetings, Iranian diplomacy added three meetings that were more of a message. The meeting with Nasrallah was aimed at confirming Iran's ongoing support for the role of the resistance, exemplified by Hezbollah in Lebanon. Meanwhile, the meeting with the delegation representing Palestinian organizations was aimed at confirming that Iran’s policies toward the Arab world and the Middle East will continue to support the Palestinian cause. Also, the meeting with Mokbel was intended to emphasize Tehran’s lasting intention to support the Lebanese army and provide it with the weapons and ammunition it requires.

The Iranian diplomat continued, “Zarif visited Beirut at this particular time; Lebanon is going through a series of crises, including the presidential vacuum, a paralyzed parliament and a faltering government, amid great mobilization in the region and a series of communications at the international level that may affect Lebanon’s conditions, as some claim.”

Tehran wanted to convey its dual message to all the Lebanese parties, at this time in particular, to show them that it is keen on upholding Lebanese stability, and it will continue its calls to avoid any further deterioration of the situation in Beirut and calls for the resolution of accumulated crises. At the same time, Iran will be standing by its friends. According to Iran, the solution to the Lebanese issues can only stem from the Lebanese people’s will, and no foreign power can place any pressure on Tehran when it comes to Lebanon. Also, no international party can ask Iran to place any pressure on its friends in Lebanon. It seems that Iran’s position is delicately balanced, and it is expected to further crystallize in the coming weeks.