As various Yemeni factions strive to reach a national consensus and achieve progress in the post-revolution period, the separatist Houthi movement in the north remains contentious. 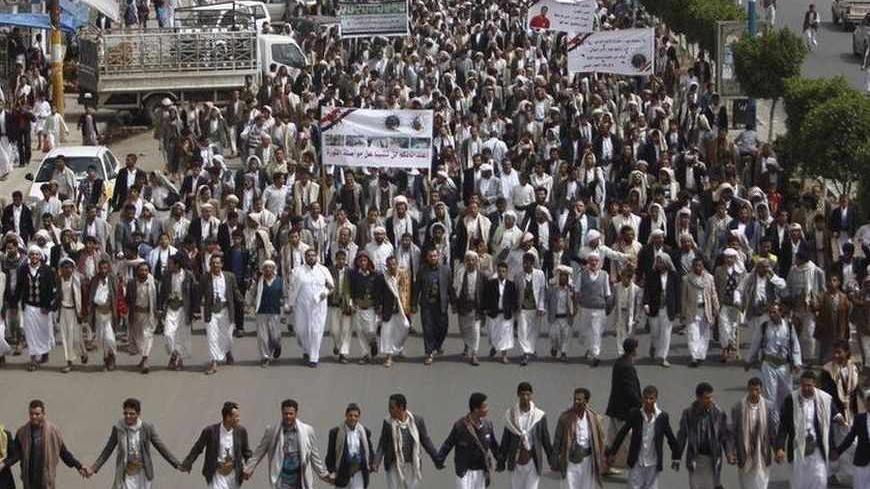 On June 5, 2013, the scene in the Saada province in northern Yemen was astonishing. The funeral ceremony of the founder of the Houthi rebel group, Hussein Badreddin al-Houthi, was a grand event. Photos of the leader, dubbed the “martyr commander,” were raised and the crowd enthusiastically chanted “Allahu Akbar” (God is great), “Death to America,” “Death to Israel,” “Damn the Jews,” and “Victory to Islam.”

The national flag, however, was nowhere to be found, and guards wearing what resembled military uniforms carried the remains of Houthi on their shoulders with reverence. Meanwhile, other guards patrolled the streets with their cars that bore the movement’s slogan, ensuring security. During the ceremony, the honor guard took the stage, pledging loyalty to the new leader, Hussein’s brother Abdul Malak. The commander of the guards addressed Abdul Malak in front of hundreds of thousands of mourners as “my master and lord.”

This burial ceremony called to mind a similar scene: the ceremonies held by Hezbollah in south Lebanon. This funeral seemed to be an attempt by the Houthis to mold into a model similar to that of Hezbollah.

What’s more, the reburial ceremony of the founder of the Houthi rebel group, which came nine years after he was killed, heralded the birth of a Houthi state and augured an impending wave of sectarian fighting in Yemen, in the event that such a state were to come to fruition.

Prior to becoming a leader of a religious, political project supported by hundreds of thousands at the turn of the millennium, Hussein Houthi, a simple member of parliament for the General People’s Congress party, wouldn’t have expected such a grand funeral at the beginning of the 1990s.

Houthi was killed at the end of the first round of the war his movement waged against the Yemeni state. Back then, a few thousand people secretly supported him, and even the residents of his hometown in the Saada province, adjacent to the Yemeni-Saudi border, feared publicly declaring their support. Until this point, there had been six rounds of battles, the last of which officially involved the Saada province.

Nine years after his death, Houthi’s photos can be seen on large billboards throughout the streets of Sanaa. His supporters, who multiplied over the years, publicly boast their affiliation with Houthi, the “martyr commander.” Currently, the Houthis even outshine Yemeni political parties on the organizational level.

The Houthi movement in Yemen underwent a radical change that affected its environment and relationships. This served as an early prelude for the movement to yield the results of the Arab Spring, years prior to its emergence.

Houthi hailed from a family belonging to the Shiite Zaidi sect. He was a former member of the al-Haq Party, which was the closest thing to a religious representation the Zaidis had in Yemen. Yet, the party did not live up to Houthi’s ambitions of becoming a member of parliament. It seemed that his time was too precious to remain part of a weak party that was unlikely to achieve his ambitions.

Houthi then joined the General People’s Congress and won a parliamentary seat in the 1993 elections, which led to a war the following year. At the time, Badreddin al-Houthi, Hussein’s father, supported Ali Salim al-Beidh. As a result, the army bombarded his house in Saada and he fled to Tehran, where he stayed for years.

Back then, Houthi dedicated his time to field work and laid the foundation for the Believing Youth Movement, which served as the nucleus of the Houthi movement, or what is known as Ansar Allah (supporters of God). In Mran, where a shrine for Houthi was being built, Zaidi youth received religious teaching and were introduced to the concept of jihad.

In June 2004, Yemenis were surprised when fierce battles erupted between the state and Houthi. The latter was accused of reviving the rule of Imam al-Badr, whom the public had revolted against in 1962. Generally speaking, to become a legend in the eyes of his supporters, a cleric needs a history of military and political struggle, and this is what happened with Houthi: He died during the battle and was transformed into an idol. The war did not end as observers predicted. Houthi’s father took the lead of the movement, while Yehya, his brother, became a member of parliament to replace his brother in April 2003.

The father and one other son were killed. Yehya travelled to Germany, where he could be active as an opposition figure while the armed battle continued.

Each of the six rounds of the war (2004-2010) ended mysteriously. Each time the army was close to ending the battle in its favor, presidential orders were issued to halt the fighting. At the same time, the Houthis were growing in number, even though the capabilities of the state were increasing. During the sixth round of battles, Saudi Arabia was involved as a third party against the Houthis. Riyadh viewed the latter as a threat to its southern borders, and the Houthis were accused of acting in favor of Saudi Arabia’s historical regional rival — Iran.

At the time, those opposing former Yemeni President Ali Abdullah Saleh said that the war with Houthis was a mere act set by the regime, aimed at draining the first armored division — led by Maj. Gen. Mohsen al-Ahmar — to tip the power balance in favor of the Republican Guard, led by Saleh’s son. The war, as Saleh’s opposition saw it, did not aim at putting an end to the Houthi movement. Yet, until now, Ahmar was still considered the enemy of the Houthis, even though both parties took part in toppling the Saleh regime in 2011.

The Houthi issue had its impact on other delicate Yemeni issues, such as the South Yemen Movement that was peacefully launched in 2007. This movement later proliferated into many factions and movements, the most prominent of which was the movement led by Beidh, which is accused by the government and international diplomats of supporting Iran and calling for the separation of the south from the north with the support of the Houthis. The Yemeni government uncovered a weapons deal, which weapons were said to be smuggled from Iran, and spying networks that include multinational members working for Tehran.

In 2011, when the Yemenis took to the streets calling for the toppling of Saleh, the Gulf Initiative was set forth as a way out. The majority of political powers agreed on the initiative as a middle solution. Yet, the Houthis did not accept it, and went on accusing Saudi Arabia and the United States of balking the revolution. Even though the Houthi movement took part in the current national dialogue, its supporters remained in the squares after the withdrawal of other movements, a move that was seen as an attempt to tread the political and revolutionary lines at the same time.

Following the burial ceremony of their founder, the Houthis have started to take advantage of their strong presence to intensify the situation and exert pressure by threatening to withdraw from dialogue, forcing the president to address the issue of members of the Houthis who were killed during a demonstration in front of the national security building on June 13 as martyrs.

It is still unclear to this day how the Houthis were transformed from a small religious group into an organization that becomes more powerful day by day. It is likely that the latest tensions will result in a new scenario that was never seen before: It could be a seventh round of battles or a Houthi expansion of powers.