After months of fierce fighting in Omran, the city fell under the control of armed Houthis, while Saudi Arabia was seeking to achieve national reconciliation in Yemen. 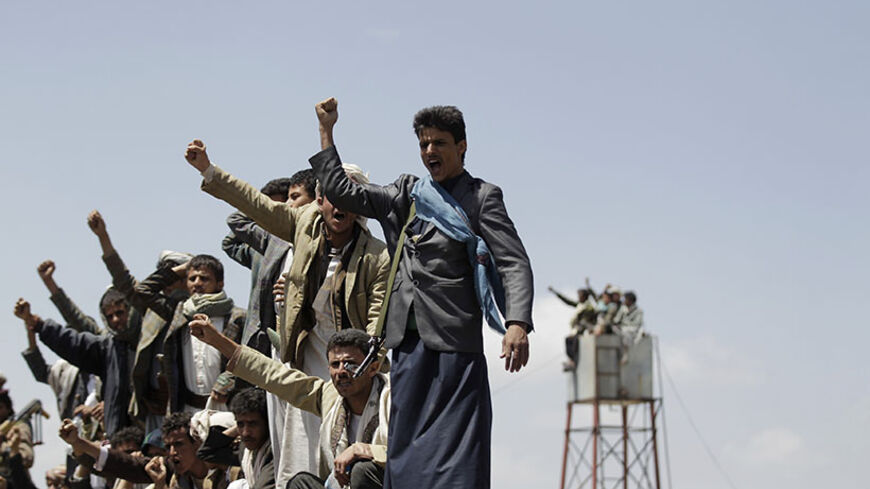 Followers of the Shi'ite Houthi group shout slogans during a gathering near the Yemeni capital Sanaa, Aug. 20, 2014. - REUTERS/Khaled Abdullah

SANAA, Yemen — After six months of fierce fighting north of Sanaa, the capital of Yemen, the strategic city of Amran fell on July 8 to the armed Houthi group and with it a large army faction. Reactions have come successively, along with predictions of what will follow. This is particularly the case since the event comes amid a severe political crisis in the capital, interruptions in basic services such as electrical power and the lack of oil and its derivatives.

Attempts to contain the repercussions of the event started as follows: Two weeks after Amran's fall, Yemeni President Abed Rabbo Mansour Hadi visited the Amran province with pictures of the visit circulating in the media under the headline, “The state has regained control of the city.”

Nevertheless, this was nothing more than propaganda since the city governor has not returned to his post, demanding the expulsion of the Houthi militias first. This declaration followed the news that the Houthis were assuming the states’ functions in Amran, such as the issuing of a death sentence against a city resident.

On July 28, on the eve of Eid al-Fitr, Hadi gave a speech in which he stressed “the need for national reconciliation.” This call seems understandable for the head of a state where many wars and conflicts have occurred. Yet, what is Hadi’s concept of the national reconciliation he called for? Everyone understood his meaning the following day when, during the prayers to celebrate Eid al-Fitr, Hadi, his military adviser Ali Mohsen and former President Ali Abdullah Saleh were brought together during the prayers for the first time since the outbreak of the 2011 revolution.

Hadi, Saleh and Mohsen represent the same alliance that triumphed during the 1994 war, the repercussions of which are still present in the country in addition to the constant changes in their positions and roles. The first party to the alliance is Saleh, the General People's Congress (GPC) and his tribal allies. The second is closely related to the first party and represents the Islamists, headed by the Yemeni Congregation for Reform (Islah Party) — an alliance between tribes and the Muslim Brotherhood — with Mohsen as a military ally. The third party, which has the largest merit since the alliance has won the war, is the southern forces that fled the South, which was ruled by the Socialist Party.

The South witnessed an intense war in 1986, when the Southern forces divided into two groups: the moderate line in the Socialist Party, which was represented by former Southern President Ali Nassir Muhammad, and the radical line in the Socialist Party. It was a bloody war about monopolizing power; killing was based on identity. Consequently, around 10,000 people were killed during the two-week war, and tens of thousands fled to the North with the defeated political and military faction that was led by Muhammad. Then, this military faction returned to the South with the Sanaa alliance that fought the Socialist Party in the South in 1994, only four years after the unification of North and South Yemen. This military faction was led by Hadi, who became the vice president after the war.

Thus, the 1994 war introduced a new Southern party to the ruling alliance in Sanaa; however, it was not very influential until several developments took place. These were embodied in the division between Saleh on the one hand, and Mohsen and Sheikh Abdullah bin Hussein al-Ahmar on the other, since the start of the succession in 2000. This was followed by the emergence of the Southern Movement in 2007, and finally the revolution in 2011. Subsequently, this has provided the Southern party with the lion's share of power, while it seemed that the status of Saleh has declined and has nearly faded away. The Islamists and Muslim Brotherhood seemed to be the biggest beneficiaries of the new split in power after the Gulf Initiative, as they were the most organized power during the revolution.

The battle for Amran has redistributed roles within the alliance of the 1994 war itself, where the role of Islah Party declined after its defeat in the war, with Saleh's comeback. Although some assumed it was the end for him, past and present events show that Saleh still represents a strong and important political and military faction. That was the landscape of the assumed national reconciliation during the Eid al-Fitr prayer. It serves as a return to this alliance that was divided and that split apart in 2011 with different distributions. Remarkably, the role of the man who seemed to be the strongest after 2011, Gen. Ali Mohsen, has declined.

On July 30, the third day of the Eid al-Fitr celebration, a rise in fuel prices and its derivatives was announced, which meant the state completely lifted subsidies in the final phase of the gradual program to reduce subsidies, which began in 1992 and included several stages. Every time subsidies were reduced, Yemen witnessed protests against these measures with a political force mobilizing the people.

The opposition Joint Meeting Party, led by the Islah Party, had declared its rejection to any price increases; the prices of petroleum rose by 60%, while fuel prices doubled. Yet, today, since it is part of the government and is responsible for decision-making, the opposition Houthis are assuming the role in calling against price increases. They are trying to use the battle of Amran politically to impose their presence in the capital, and therefore in power. The demonstrations began on Aug. 4, raising the slogans and flags of the Houthi group, which clearly shows the group's ability to mobilize its supporters.

The Houthis have even insinuated that they will use violence as a last resort to overthrow the government and the decision to lift subsidies.

Journalist Sami Nuaman told Al-Monitor, “The Houthis are following in the footsteps of Hezbollah in Lebanon. They were not satisfied with the government offering some ministerial positions as they want influential and sovereign portfolios. Thus, it's not unlikely that they use violence while talking about tribes who are determined to enter Sanaa and overthrow the government. The tribesmen will not take actions in their tribal capacity but in their affiliation with the Houthis. They are actually preparing themselves to enter Sanaa.”

Nuaman added, “The Houthis will remain a problem, and there is nothing that will be an obstacle to its expansion. Its sectarian nature will turn it into the opposite of and a threat to the existence of the Yemeni state.”

Saudi Arabia is trying to arrange the political situation in Yemen again under the banner of national reconciliation, in the form of a reconciliation the kingdom aspires to. It pursued some contradictory policies, namely the weakening of the Brotherhood after recognizing the Houthis as a local force, but not as a force that causes concern to the Saudi border and presence in Yemen. The result so far is a weakened Brotherhood and difficulty in containing the Houthis, who have become stronger. The scene shows a lot about the effectiveness of the declining Saudi role in Yemen; however, they retain an important role despite the presence of new and secondary players such as Qatar and Iran.

Thus, Saudi Arabia is moving within its usual political space with its traditional and old allies, in an attempt to reap some conflicting interests. Yet, national reconciliation will not be enough to counter the expansion of the Houthis. Therefore, things are more likely heading toward further interaction. The phase following the fall of Amran is certainly very different from the period that preceded it.