Saudi Arabia once enjoyed unrivalled influence in Yemen, but the transition of power and breakdown of state have allowed other foreign powers, particularly Qatar and Iran, to get a stake in Yemeni affairs. 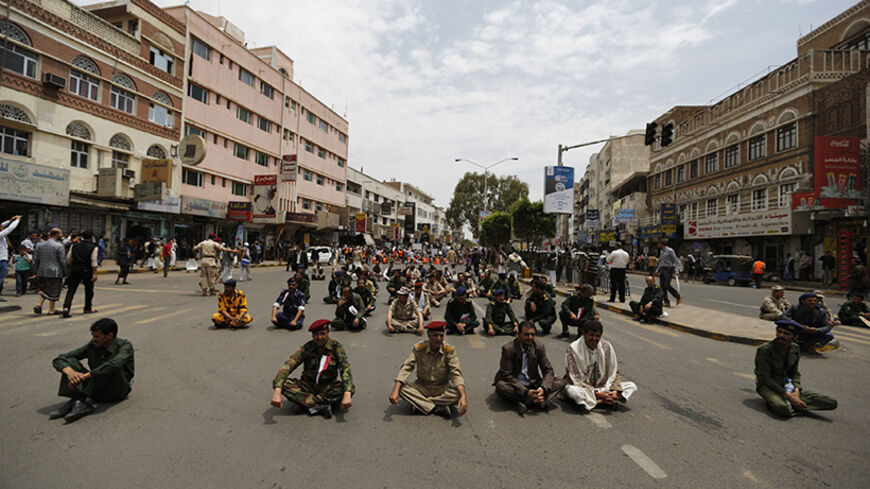 Army and police officers sit on the ground during a protest in Sanaa, Aug. 4, 2014. - REUTERS/Khaled Abdullah

Saudi Arabia is going through a pivotal phase of redrawing its alliances in the region, including in Yemen, where it seems to have lost its customary ability to understand the progression of developments on the ground. In the past, Saudi Arabia was the maker of events and heroes, who performed their Riyadh-scripted roles on the familiar Yemeni stage.

The list of forces with influence in Yemen has changed a lot after 2011, and in parallel, so did Saudi alliances on the internal Yemeni scene, where Riyadh’s influence was the greatest. These changes in alliances remain unclear and indiscernible, for they continue to be modified by Riyadh, pursuant to ongoing developments in Sanaa.

Despite the fateful shifts in alliances and policies currently underway in Yemen, Riyadh, for the first time ever, is represented today in Sanaa by a charge d’affaires instead of an ambassador, following the latter’s transfer to the Foreign Ministry in Riyadh where he was tasked with overseeing Yemeni relations. The ambassador secretly visited Sanaa lately, as an envoy of Saudi King Abdullah bin Abdulaziz, to mediate between the former and current Yemeni presidents and try to reconcile between them, according to local media.

Saudi Arabia no longer has a strong ally to support its policies in Yemen, following the fall of Yemeni President Ali Abdullah Saleh and the Muslim Brotherhood distancing itself from the kingdom after 2011. The absence of a strong and definite ally in Sanaa has muddled Riyadh’s policies toward Yemen, for — throughout decades in the past — Saudi Arabia had contented itself with backing powerful factions or persons able to carry out its interests on the Yemeni scene.

However, on July 8, Yemeni President Abed Rabbo Mansour Hadi visited Jeddah to meet with Saudi leaders in light of critical times in Yemen, as violent clashes erupted with Houthis in Amran, and Sanaa suffered from a severe financial crisis; the main manifestation of which was — and remained until the government officially removed fuel subsidies on the second day of Eid al-Fitr — the months-long absence of petroleum products from the country’s markets. Hadi returned from his visit to subsequently announce the kingdom’s infinite and indefinite support for Yemen, without giving additional details.

Furthermore, despite local media outlets reporting Saudi support for Yemen in millions of dollars, a source knowledgeable about the details of the meetings, told Al-Monitor, “Support was limited to petroleum products for the next three months, and that Saudi Arabia is convinced Saleh was divisive and is a hindrance to the transitional process.”

These two issues reflected the great change underway in the Saudi position, as the ambiguity of this position vis-a-vis the crisis between Hadi and Saleh fell in the latter’s interest. But, the economic backing, albeit limited, came months after Saudi Arabia’s former ambassador to Washington Prince Turki Al Faisal’s commented that “Saudi economic support to Yemen would cease until the situation there stabilized.”

In any case, Riyadh’s ambiguous position in Yemen and its lack of action there confirmed the Saudis confusion and their uncertainty as to who would control Yemen’s future and who to ally themselves with. In this regard, Saudi alliances in Yemen changed post-2011, when two of its most powerful historical partners, the family of Sheikh al-Ahmar and Maj. Gen. Ali Mohsen al-Ahmar, became its most significant adversaries due to the Saudi hostility toward the Muslim Brotherhood and anyone associated with them, such as the Ahmars.

In spite of Hadi’s failure to take a strong stand toward Doha to get the kingdom’s favor, he did succeed — to some extent — in gaining Saudi public support, thus putting an end to any aid that Saudi Arabia was granting to political factions that opposed him. This came while the Yemeni president has increasingly praised the Saudi king lately, to the point of mentioning the monarch by name on four occasions in his speech at the Friends of Yemen meeting in April, while failing to mention the youth revolution, for example, which used to be at the core of all his speeches for over two years.

But the development that drew the most attention lately was Hadi’s sudden rapprochement with some leaders of the Southern Movement, as well as opposition figures abroad, who enjoy strong relations with Saudi Arabia, such as former Prime Minister Haidar al-Attas. Furthermore, Maj. Gen. Nasser al-Nouba, one of the first members of the Southern Movement, announced last month his support for Hadi and the national dialogue, a development that could not have occurred without a green light from Riyadh, especially in Attas’ case.

Saudi’s confused and reduced influence in Yemen might also be owed to the kingdom’s current preoccupation with more important, strategic fronts, such as Egypt and Syria, in light of the current and unprecedented discord between Washington and Riyadh in positions toward the Middle East.

All of this coincided with the void in Saudi Arabia’s policies vis-a-vis Yemen, as a result of the death of Prince Sultan bin Abdulaziz, who managed the Yemeni dossier for four decades, for he was one of the few princes truly familiar with the realities and personages on the Yemeni scene. Prince Nayef’s subsequent death exacerbated that void.

Based on all this, one can say that this might be the first time that the kingdom is disoriented vis-a-vis Yemen, or, in the best of cases, losing its grip on the situation there, following decades of undisputed political domination and influence.

During the month of Ramadan of every year, Sanaa empties itself of politicians, military commanders and tribal elders, most of whom use courtesy visas to go on the Umrah pilgrimage to Mecca, where these types of visas bestow upon them preferential treatment afforded by the kingdom to Yemeni leaders of state and people with influence.

But, this year, the number of Yemeni politicians traveling to Saudi Arabia has greatly decreased, with most of them remaining in Sanaa during the month of Ramadan, as courtesy visas are no longer being issued by the Saudi Embassy in Sanaa. This is an important indication that Saudi-Yemeni relations are chilly, and being rebuilt based on the new, post-2011 Yemeni reality on the ground. As Saudi Arabia’s political monopoly in Yemen comes to an end, the influence of new players such as Qatar, the United Arab Emirates and Iran continues to grow.