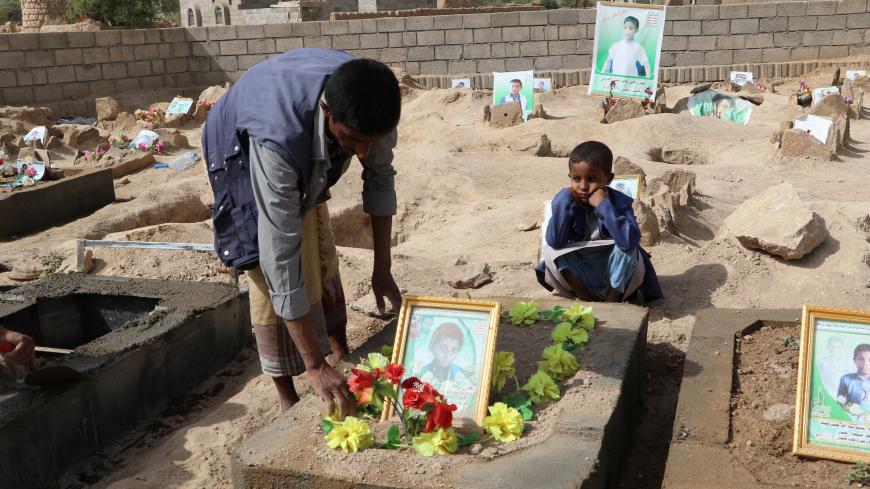 Abdullah al-Khawlani puts roses on the grave of his son, Waleed, who was killed in an Saudi-led airstrike in August that killed dozens, including many children, in Saada, Yemen. His other son, Hafidh, who survived the strike, looks on as his father positions the flowers on Sept. 4, 2018. - REUTERS/Naif Rahma

The Iran-backed Houthi rebels and the Saudi-led coalition fighting in Yemen reportedly brokered an informal deal to cease hostilities around Hodeidah on Tuesday. The deal has held for the past 24 hours after 150 people died in daylong clashes in the port city, which handles 70% of aid entering the war-torn country.

Why it matters: After Defense Secretary Jim Mattis announced that the United States would stop refueling Saudi and Emirati warplanes in Yemen, the deal leaves open a tiny window for UN-led peace talks in Yemen.

It’s unclear whether the Donald Trump administration, which made a full-court press for the cease-fire late last month, will make a further push for a broader peace deal, but the news could change the UN’s timetable as the world body had postponed talks until December. The deal comes just one day after UK Foreign Secretary Jeremy Hunt called on Saudi Arabia to end the Yemen conflict, suggesting that international pressure could help lead to a settlement.

UN reaction: The UN’s envoy for Yemen, Martin Griffiths, welcomed the cease-fire announcement, which he said opened a fresh path for peace talks. “The logistical preparations are under way to prepare for the upcoming round of consultations,” the veteran British diplomat said in a statement. “We are in a position to move forward.”

After the Houthis failed to show up for talks in Geneva in September, Griffiths got both sides to agree to confidence-building measures to set the table for a new dialogue, including UN administration of Hodeidah, prisoner exchanges and the reopening of airports in Sanaa and Aden to facilitate the delivery of aid. The UN reported that just 60% of Yemen’s monthly food requirement came through the ports of Hodeidah and Saleef in October.

Word on the street: Yemeni sources don’t believe the cease-fire in Hodeidah will ease the country’s suffering. “The cease-fire will not solve starvation in Yemen,” Radhya al-Mutawakel, founder of the Mwatana for Human Rights, a Sanaa-based nongovernmental organization, told Al-Monitor. “It’s only a full political agreement that can rebuild a stable state in Yemen. Even if there are no strikes, and no indiscriminate shelling from Houthis, the starvation will go on.”

Mutawakel said Saudi Arabia’s refusal to let exiled President Abed Rabbo Mansour Hadi’s government maintain a presence on the ground, the blockade of air and sea ports of entry and the collapse of Yemen’s currency after the closure of the country’s central bank had also driven the famine. The Guardian reported that the World Food Program managed to distribute aid today, despite conflicting reports of sporadic airstrikes.

What’s next: The US administration is still mulling whether or not to label the Houthis as a terrorist organization, which some experts think could shake up negotiations. Meanwhile, the Huffington Post reports that Republicans in the House of Representatives are set to beat back a Democratic effort to nix US involvement in Yemen during the lame-duck session of Congress. The UN has said that as many as 14 million Yemenis could be on the brink of starvation.

Know more: Read Jack Detsch’s story from Sunday for more background on the decision to stop refueling the Saudi-led coalition in Yemen.