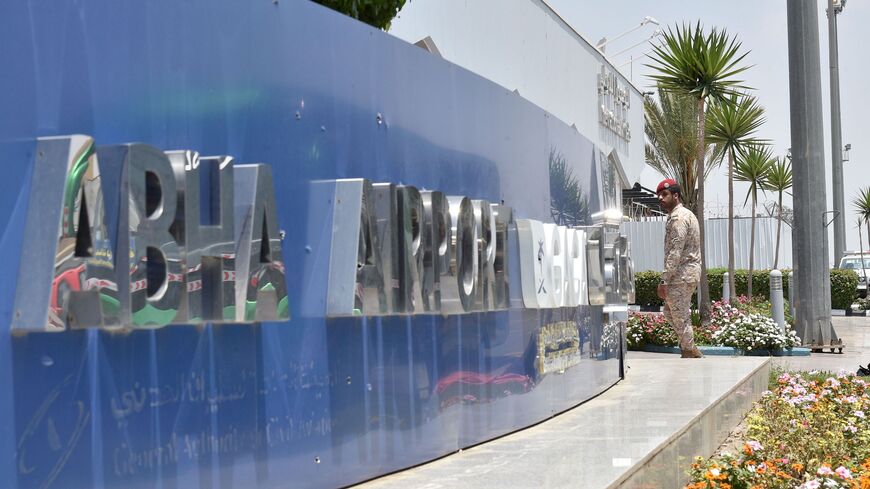 A picture taken during a guided tour with the Saudi military on June 13, 2019 shows a sign at Abha airport in the popular mountain resort of the same name in the southwest of Saudi Arabia. - FAYEZ NURELDINE/AFP via Getty Images

The Houthi rebels in Yemen claimed a drone attack on Saudi Arabia’s Abha airport on Monday that the Saudi-led military coalition battling the Iran-aligned rebels has not confirmed.

“The Air Force has fired a counterattack on Abha International Airport with [a] Qasef-2k drone, targeting an important military site,” said Houthi military spokesperson Yahya Saree, adding, “The designated target has been hit with high precision.”

“This targeting comes within the framework of legitimate response to the aggression's escalation and an all-out siege on the Yemeni people,” Saree said.

Separately on Monday, Saudi authorities said the Houthis had launched a bomb-laden drone in the direction of the southwestern city of Khamis Mushait. Saudi state television, cited by Reuters, reported the kingdom’s air defenses downed the drone.

The Saudi-led coalition has been fighting the Iran-aligned group since 2015, when Riyadh intervened in Yemen’s civil war to restore the internationally recognized government. In recent months, the Houthis have ramped up their cross-border attacks on Saudi Arabia, launching explosive-laden drones and missiles toward a number of Saudi military installations, oil facilities and civilian sites.

The Houthis, who control the capital Sanaa and much of northern Yemen, rejected a US-backed Saudi cease-fire proposal in March. The group has, meanwhile, pressed ahead with an offensive on the oil-rich province of Marib, the Yemeni government’s last stronghold in the north.

On Sunday, Saudi officials said a Houthi-launched drone had struck a school in the country’s Asir region but that there were no confirmed injuries. Earlier this month, at least 21 people, including a five-year-old girl, died in a ballistic missile attack on a gas station in Marib that the Yemeni government blamed on the Houthis.

The grueling conflict between the Houthis and the Western-backed coalition has created what the United Nations considers the world’s worst humanitarian crisis. Nearly 2.3 million children under the age of five in Yemen are likely to experience acute malnutrition in 2021, the UN estimates.