Escalation seems to be looming in Yemen in the wake of numerous artillery shellings of a local market, despite a supposed truce between Houthi rebels and the Saudi-led coalition. 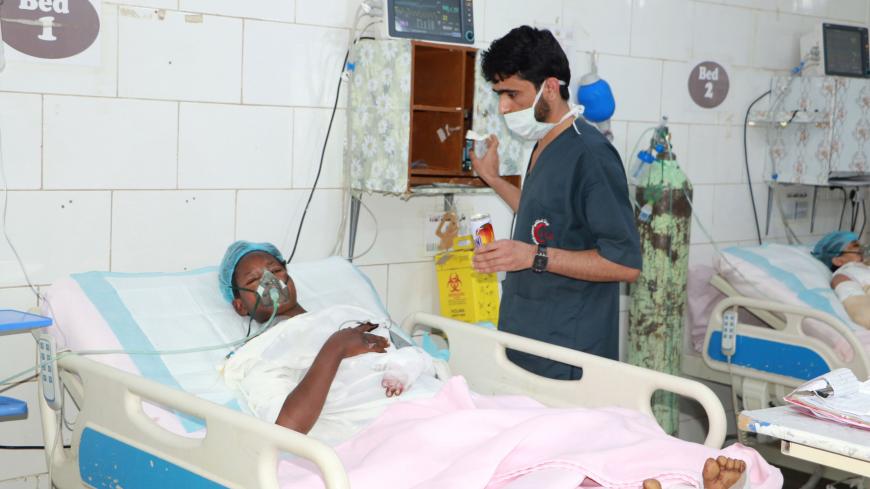 A nurse attends to an Ethiopian migrant woman who was injured in Tuesday's shelling on a market, at a hospital in Saada, Yemen, Dec. 26, 2019. - REUTERS/Naif Rahma

SANAA, Yemen — Dozens of civilians have been killed or injured in recent attacks on al-Raqw market in Yemen’s Saada province, with most victims being African migrants who had fled poverty in their own countries.

The latest attack occurred Dec. 24 when artillery shelling hit the market in Munabbeh district, killing at least 17 civilians and wounding 12, most of whom were Ethiopians, UN humanitarian coordinator for Yemen Lise Grande said in a statement.

Yemen's civil war began in 2015 between Sunni leaders, backed by the Saudi-led coalition, and Shiite Houthi rebels supported by Iran.

But Houthi military spokesman Yahya Saree vowed Dec. 25 that retaliation would be “painful for the Saudi enemy.” Two days later, Houthis fired a land-to-land ballistic missile at a brigade of the Saudi National Borders Guard in Najran. Saree claimed the missile killed and injured "dozens" of Saudi military personnel, "including officers." The coalition did not comment on the report.

In a Dec. 30 tweet, Saree said Houthis shot down a spy drone belonging to the Saudi-led coalition over Hodeidah. In a separate post, he said this will be the “Year of Air Defense," when Houthis will down all coalition planes breaching Yemeni airspace.

The coalition launched six airstrikes into Saada province Jan. 3. Three of those strikes hit a house in Bani Muath area, killing three people and leaving a young child as the only survivor of his family, according to local media and an independent journalist. As of this writing, no airstrikes had been reported since then, though surveillance drones have been hovering over the area, Houthi media reported.

The attacks come despite a tentative truce in Yemen, which Saudi Arabia has not officially announced. There are reports of Oman mediating indirect talks between the sides.

Regarding the November market attacks, local media reported that all the victims were African, stressing the attacks followed the same pattern, with artillery shelling fired from across the Saudi border.

“I've been living here [in Munabbeh district] for three years,” Elias Morsi, an Ethiopian migrant, told Al-Monitor by phone. “We ran from poverty to find work. Some [migrants] work at the market and others enter Saudi Arabia.” Al-Raqw market is close to the Saudi border, said Awfan, making it a promising alternative for African migrants seeking work, refuge or a transit point to Saudi Arabia.

“They know it's a commercial market where there were no [military] camps or stores of weapons,” Awfan said. He added, “They started targeting shops by artillery shelling, causing material damages, while bodies were burning inside the shops.”

In a 16-minute video, Al-Masirah TV broadcast cell phone footage taken by citizens and testimonies of eyewitnesses, including African migrants.

“Africans walk in and out of Saudi Arabia through the market used for trade and for smuggling the Yemeni stimulant khat,” Awfan told Al-Monitor by phone.

Morsi has been living in a small house near the market with other Africans for three years, he said. Some Africans live in tents, he noted. “I live with my wife and three children,” he said, adding that he has two other sons he left behind in the Ethiopian capital, Addis Ababa, where he was born.

Morsi said he and other Africans fear for their lives in Yemen but can't stop working at the market, where he is employed at a restaurant. He said those killed in the market attack were buried in a nearby cemetery. None of his friends or relatives was killed.

Meanwhile, Grande stressed in her statement, “Humanitarian partners are supporting Al Jumhori and Al Talh hospitals in Saada where the injured are being treated.”

Mohammed al-Khateeb, director of al-Talh hospital, told Al-Monitor he was not at the hospital at the time of the attack and had no information to offer. Al-Monitor also tried to contact doctors at the hospital and to speak with one of the injured, to no avail.

According to Awfan, al-Raqw market is about a three-hour walk from the center of Munabbeh district. “Ambulances did not enter the market [fearing more shelling], and victims were carried to a nearby area amid [fears of another] attack from Saudi [military border] posts overlooking the market,” Awfan said.

“The terrain [of the area] is rough, which made it difficult to transport the wounded" to hospitals, Awfan said. The closest facility to Munabbeh lies some 40 kilometers (25 miles) away. “This is why some people died while on their way [to the hospitals],” he added.

The prevailing uncertainty of the region's current military and political scene since the US airstrike Jan. 3 that killed top Iranian commander Qasem Soleimani in Baghdad makes it hard to predict the situation in Yemen. This is especially true if it comes to a full-blown confrontation between the US-backed, Saudi-led coalition and the Iran-aligned Houthis, if Yemen becomes a territory of Iran's “harsh retaliation” for Soleimani’s killing.