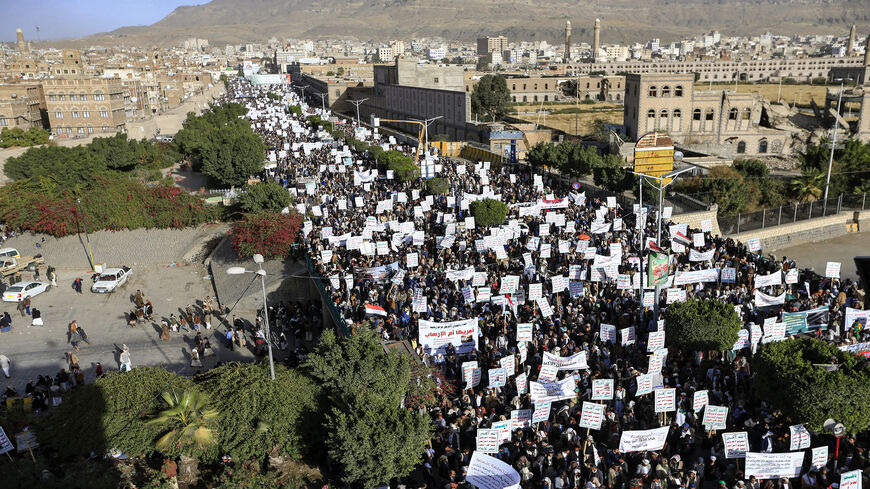 Supporters of the Houthi movement attend a rally denouncing the United States and the outgoing Trump administration's decision to apply the "terrorist" designation to the Iran-backed movement, in the Houthi-held capital Sanaa, Yemen, Jan. 25, 2021. - Mohammed Huwais/AFP via Getty Images

Six months have gone by since the arrival of the US administration under President Joe Biden, which made ending the Yemen war a top priority.

Upon his first weeks in office, Biden took critical decisions concerning Yemen in the hope of creating a better environment for diplomatic efforts. He revoked former President Donald Trump's decree, which designated the Houthis as a foreign terrorist organization. Biden declared the reduction of military support to the Saudi-led coalition fighting the Houthis in Yemen. He also nominated highly regarded US diplomat Tim Lenderking as the US Envoy to Yemen.

Such resolutions unleashed a sense of cautious optimism that the with US leadership that diplomacy could help end the conflict, especially as the US has been involved in indirect talks with the parties to the Joint Comprehensive Plan of Action (JCPOA) about US re-entry into the Iran nuclear deal, and the lifting of sanctions on Iran.

There are no signs as yet, however, that the Houthi insurgents are letting up in their military campaign, including targeting of Saudi Arabia, which has backed the US diplomatic effort.

Over the last two months, the United States took some measures, which have further infuriated the Houthis. On May 20, the United States imposed sanctions on the head of the general staff leading the Houthi's Marib offensive, Muhammad Abd Al-Karim al-Ghamari, and Yusuf al-Madani, a military leader taking part in the offensive on Marib. Such a US action was intended to deter the group from continuing their military advance toward Marib. Yet the fighting kept ongoing unabated.

On June 10, the US administration declared sanctions on a smuggling network that is believed to create millions of dollars for the Houthis in Yemen. A US Treasury statement said that the network works with Iran's Quds Force to generate "tens of millions of dollars in revenue from the sale of commodities, like Iranian petroleum."

The latest US pressure on the Houthis was seizing the group's TV channel website, Al-Masirah. On June 22, the US Justice Department said, "The United States seized 33 websites used by the Iranian Islamic Radio and Television Union (IRTVU) and three websites operated by Kata'ib Hizballah (KH), in violation of US sanctions."

These series of actions against the Houthis have added to the group's apprehension about the American role in Yemen. Mohammed Abdul-Salam, spokesman for the Houthi movement, said to Al-Masirah TV June 18 that the United States pursues its interests and plots in Yemen, using the humanitarian issues as a pretext. According to Abdul-Salam, the United States is by no means serious about ending the Saudi-led military aggression and blockade on Yemen.

Regardless of whether the US government is led by Democrats or Republicans, the Houthi rhetoric has maintained the same sense of disapproval of the American role in Yemen.

Mohammed Ali al-Houthi, a Houthi Supreme Political Council member, said the United States had not taken any tangible step to bring peace to Yemen. On June 28, he said in an interview with Al-Masirah TV, "The US officials' remarks regarding peace in Yemen are only for propaganda purposes, and we have not seen any practical action supporting those remarks."

Houthi does not believe that the Saudi-led coalition is the first decision-maker when it comes to the war in Yemen. He attributes the blockade and the war in Yemen to the United States. Houthi added, "It is the United States that has waged war against the people in Yemen, continues to bomb them with warplanes, imposes a siege on them and has occupied parts of Yemen through its allied forces."

The United States has been openly providing military support to the Saudi-led coalition, but Washington has no boots on the ground in Yemen. It also has no direct control of Yemen's ports and airports. Nonetheless, the Houthis see the US direct involvement in the war in Yemen as undeniable.

Yahya Saree, the Houthi military spokesman, claimed that they downed two US reconnaissance drones on June 20 and June 22. He said the Houthi air defenses shot down a US ScanEagle spy plane while carrying out "hostile operations" above Al-Mashjah area, west of Marib.

The US military denied operating any drone on Yemen's Marib. On June 23, Lt. Col. Karen Roxberry, a US military Central Command spokeswoman, said the United States had "not downed CENTCOM assets" in the region. She continued, "We are not flying over Marib."

The Houthi attitude toward the United States has not changed over the past six months, and it does not seem it will alter in the near future. A political researcher in Houthi-controlled Sanaa spoke to Al-Monitor on condition of anonymity, saying that the United States cannot establish good ties with the Houthis now or in the years to come.

He noted, "The Houthis will hold talks with the Americans. But they will never believe or trust Washington. We had little optimism when Biden came to office. We thought his approach would encourage the Houthis to be more flexible and engage in talks in good faith. Sadly, the country has not even seen a lull in the fighting."

Since February, the Houthis have intensified their ground military operations and missile attacks on Marib, leaving civilian casualties, including children. Millions of displaced families have been in misery, and their ordeal will worsen should the armed confrontations persist.

On July 1, spokesman Ned Price said in a press briefing that the US State Department is "beyond fed up" with Houthi attacks in Yemen as these assaults exacerbate the humanitarian crisis in the country.

The Sanaa-based political researcher concluded, "Though the US has repeatedly urged the Houthis to stop their attacks on Marib, the group did the opposite. Swarms of Houthi fighters keep attempting to seize the city. The new US administration's kindness towards the Houthis has not led to any thaw or softened the group's hostile attitude towards America."