It's unclear whether Iran is providing weapons to the Houthis in Yemen, but whatever the source, the rebels are making good use of bomb-laden drones and even missiles. 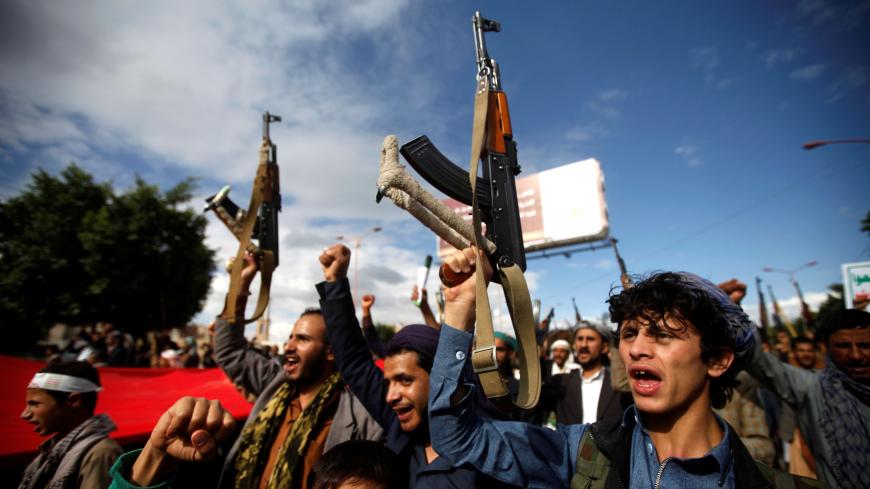 Supporters of the Houthi movement take part in a protest marking Al-Quds Day (Jerusalem Day) on the last Friday of the holy month of Ramadan in Sanaa, Yemen, May 31, 2019. - REUTERS/Mohamed al-Sayaghi

Houthi rebels launched several attacks against government targets in Yemen's Marib province July 4, using a ballistic missile and armed drones. The missile destroyed the governor's house and damaged others nearby, the government confirmed, adding that no one was killed.

The Houthis also claimed to have killed dozens of people in other attacks in Marib that day, using drones armed with bombs. One attack was said to have been against a Patriot missile system that the Saudi-led military coalition — which supports the Yemeni government against the Houthis — had supplied to the government, but no other details were given. There were also reports that Saudi Arabia on July 4 intercepted drones targeting its Jizan airport.

In stepping up their attacks against Saudi Arabia recently, the Iran-backed Houthis are displaying growth in their offensive capabilities. It's been more than four years since the coalition announced it had destroyed 80% of the Houthis’ heavy-weapon warehouses and neutralized 95% of their arms used in airstrikes. But today, Houthi missiles have reached the depths of Saudi Arabia and the United Arab Emirates and broken into their advanced defense systems, targeting vital locations.

For example, in addition to the July 4 attacks, the Houthis two days before had targeted the Saudis' Abha airport, wounding nine people. Houthi army spokesman Yahya Saree said Houthis attacked that airport 10 times in May and June — and during that time also launched airport attacks on Jizan seven times, Najran three times and once on Khamis Mushayt military base. A June 24 attack on Abha killed one person and wounded 24 others, and on June 12, a Houthi-launched cruise missile injured 26 civilians at that airport, according to the Saudi-led coalition.

Houthi spokesman Mohammad Abdul Salam said in a statement to the rebel-run Al-Masirah website that Houthi drones will continue attacking Saudi airports until the siege on Sanaa International Airport is lifted. He called on civilians and companies operating in Saudi Arabia to avoid military sites and airports, prompting South Korea to warn its citizens July 3 against traveling to southern Saudi Arabia.

The UN Security Council has condemned the Houthi attacks on Saudi Arabia, calling for those responsible to be held accountable.

Editor-in-chief of the Houthi-affiliated Al-Jaish magazine Abdul Ghani al-Zubeidi told Al-Monitor about “new weapons that include a new generation of drones with a range of 2,000 kilometers [1,243 miles] and that will be unveiled soon.”

He added, “An air-defense system, including the 2K12 Kub [surface-to-air missile], which downed the US MQ-9 [Reaper drone] in Hodeidah on June 6, has been developed.” The United States says Iran helped the Houthis shoot down the drone.

Zubeidi also said, “The [Houthi] army command is adopting a strategy of crippling movement in Jizan and Abha airports, which are the take-off points of most of the aggressors' [Saudi and UAE] aircraft. If strikes in Yemen persist, we will move to the next stage, which is targeting more distant airports in Riyadh and Jeddah.”

Although Houthis target Saudi Arabia constantly, for the most part they have only threatened the UAE of late. On May 20, the Houthis warned they would strike 300 UAE targets unless the Saudi-led coalition ends its aggression in Yemen.

But, Zubeidi said, “Targeting the UAE depends on military developments on the western front. There is an understanding with Abu Dhabi not to escalate the situation in western Yemen through their [local Yemeni] allies. Otherwise, Houthis will have a strong response and will come after Abu Dhabi’s ports and airports.”

Zubeidi’s comments coincide with reports that the UAE has begun to pull out its military forces in Yemen, which may be seen as a Houthi victory and a weakness in the Saudi-led coalition.

The Houthis’ development of air defenses and drones points to a change of strategy, a shift to one much different than when the conflict officially began in March 2015. Battles then were limited to ground forces and gang wars.

Ahmed Nagi, a scholar at the Carnegie Middle East Center, told Al-Monitor, “It's no longer difficult to get drones, especially with their multiple uses. But Houthis develop their drones to carry explosives, and Iranians could have contributed largely to building Houthis’ capacities in this field.”

Nagi added, “Houthis might have their own goals, but this doesn't mean they are distinct from the goals of Iranians. Both sides might meet on several key issues." He said that in recent years, "Houthi-Iranian coordination increased, which was obvious in the timing of the Houthi attack on Saudi Arabia amid international escalation against Iran.”

Since Houthis can't easily access long-range and ballistic missiles, whose development and smuggling are complicated, it seems they will rely more and more on drones, which are easy to smuggle or build for military purposes. Even if Iran can alleviate the tension with Washington and the United States' Gulf allies, Houthis will probably continue launching drones against Saudi Arabia.

During this protracted war, Houthis have been able to adapt and develop their qualitative weapons. Whether through local or imported drone technology, they succeeded in rebuilding and controlling drones. The Saudi-led coalition may have to take this development seriously and perhaps accept peace terms that aren't too ambitious.