The Houthi group said 13 civilians, including four children, were killed in a coalition airstrike Monday. 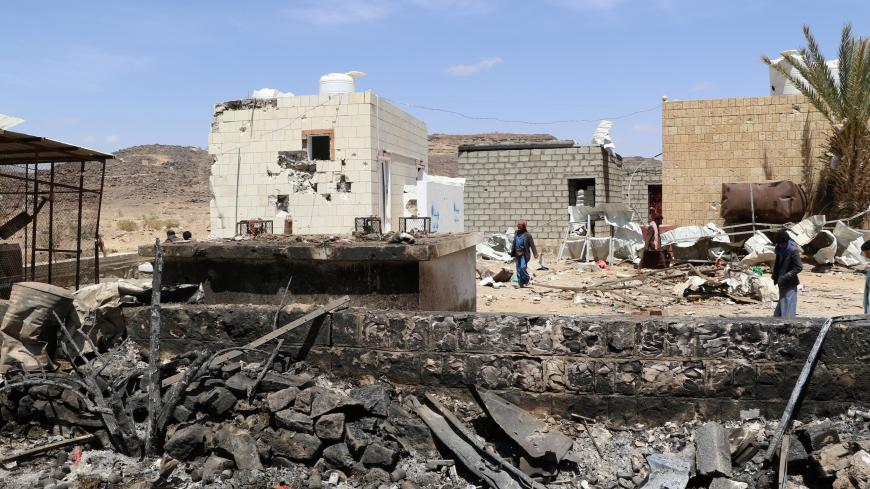 People walk at the scene of an airstrike that hit a gas station near a hospital in Kutaf district of the northwestern province of Saada, Yemen, March 28, 2019. - REUTERS/Naif Rahma

The Saudi-led coalition denied accusations from Houthi rebels that one of its airstrikes killed civilians in northern Yemen.

The Iran-aligned Houthi authorities said a coalition airstrike hit a vehicle carrying civilians in Saada province, killing 13 people, four of whom were children. Reuters reported that a statement from the coalition said its strike Monday was "legitimate" because the vehicle was carrying armed Houthis.

“We share our deepest condolences with the bereaved families and loved ones of those who have lost their lives in this terrible, unjustified attack,” Lise Grande, the UN humanitarian coordinator for Yemen, said in a statement Tuesday.

The alleged attack in Saada province's Shada area came hours after the coalition said it intercepted a Houthi-launched missile from the same region. A spokesperson said the missile was among more than 300 launched by the rebels since 2015.

Despite calls for a pause in the fighting to tackle the coronavirus, the war in Yemen, now in its sixth year, has largely continued unabated. The UN says it has documented more than 800 civilian casualties since January.

The Western-backed coalition has faced widespread criticism over its bombing campaign in the war-torn country, but on Monday the United Nations removed the coalition from its blacklist of countries violating children’s rights.

In his annual report to the Security Council, UN Secretary-General Antonio Guterres wrote that the coalition killed or injured 222 children in Yemen last year, a drop from 729 the year before — a "sustained and significant decrease." The report also attributed 313 child deaths or injuries to the Houthis and 96 to the Yemeni government’s forces.

The Save the Children charity called Saudi Arabia’s removal from the blacklist a “sad irony.”

“The attack shows that such a decision is far too premature. Children are still dying from bombs almost daily,” the organization said.

In a statement Tuesday, the coalition welcomed the delisting and said it would investigate the reports of child casualties if the UN shared its evidence.