A new report has found that the Saudi-led coalition, Houthi rebels, government forces and other factions in Yemen's civil war have all occupied, used or attacked schools. 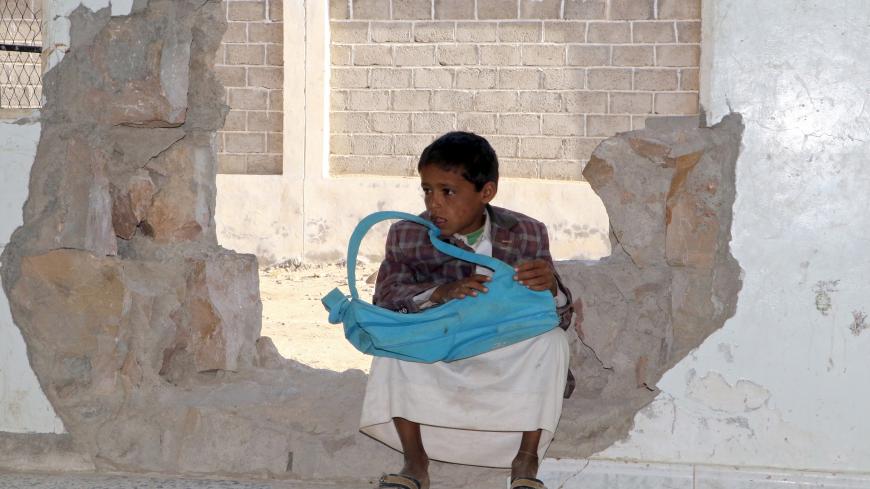 A Yemeni boy sits in a hole in a wall at a school that was damaged in the country's ongoing conflict between the Saudi-led Arab coalition fighting Shiite Houthi rebels in the northern province of Saada, on March 14, 2017. The conflict in Yemen, which escalated with the intervention of the Saudi-led coalition two years ago, has more than doubled the number of children deprived of schooling to some 3.5 million, threatening the future of a whole generation in the impoverished country. - STRINGER/AFP via Getty Images

As the conflict in Yemen approaches its sixth year, attacks on or near schools have forced many to close their doors, depriving thousands of children of their basic right to an education, a new report has found.

Independent Yemeni human rights organization Mwatana and the London-based Ceasefire Center for Civilian Rights found that the country’s warring factions have "all damaged, destroyed, used, occupied or attacked schools." The report released Tuesday documented more than 380 attacks on or in close proximity to educational facilities between March 2015 and December 2019.

Many of 153 airstrikes attributed to the Saudi-led coalition appeared to be indiscriminate, the report found. In the vast majority of cases, when coalition airstrikes damaged or destroyed schools, researchers were not able to identify a military target nearby.

“In 140 out of 153 [cases], there wasn’t any military presence in or near the schools. It’s like they bombed the schools for nothing,” said Noria al-Hossini, the report’s lead researcher.

Mwatana and the Ceasefire Center also documented 171 instances of schools being occupied or used for military purposes, with the Iran-aligned Houthis responsible for a majority of incidents. Forces loyal to Yemen’s President Abed Rabbo Mansour Hadi, as well as the Emirati-backed Southern Transitional Council (STC) Security Belt, also used or occupied schools, the report found.

The report highlights a school in Hodeidah governorate that was seized by Emirati-supported forces in February 2018. Now functioning as a weapons storage site and military barracks for the Giants Brigades (Al Amaliqah), the school is fired upon daily by the Houthi rebels, witnesses said. The students, only a small fraction of whom have continued their schooling, now study at a nearby mosque.

The authors also recorded instances of Houthis planting landmines and storing explosive materials near schools. The STC and forces loyal to the government, including Islah-affiliated groups, have looted and damaged classroom furniture and forcibly entered schools with weapons, according to witnesses.

The war between the Houthi rebels, who overran the capital in 2014, and the Saudi-led coalition of Arab nations, which intervened the next year to restore the internationally recognized government, has created what the United Nations describes as the world’s worst humanitarian crisis. Already the region's poorest country, the fighting has left roughly 80% of Yemen's population in need of some form of aid, the UN says.

Children continue to bear the brunt of the crisis. The UN children’s agency, UNICEF, said in 2019 that one in five schools could no longer be used as a direct result of the conflict. More than 2 million children are out of school, and a further 3.7 million are at risk of dropping out.

“Access to education remains a dream for millions of Yemenis,” said al-Hossini. “It was shocking that three or four years later, schools are still destroyed or damaged, and the young kids have to study under trees.”

With 155 documented incidents, including 87 coalition airstrikes and 58 cases of school occupation and military use by the rebels, Saada was the governorate subjected to the most school attacks, the report said.

The Houthi-controlled northwestern governorate bordering Saudi Arabia was the site of an August 2018 air attack that killed dozens of young boys when a coalition warplane dropped an American-manufactured bomb on their school bus. The Western-backed coalition later expressed regret and said "mistakes" were made.

Saudi Arabia, the United Arab Emirates, and the governments who supply them with bombs and other weapons have been widely criticized for not doing more to limit civilian deaths in Yemen. A recent government watchdog investigation into a multibillion-dollar arms sale to Saudi Arabia found that the Donald Trump administration failed to adequately assess the risk of civilian casualties in Yemen before authorizing the transfer.

In June, the United Nations angered human rights groups by dropping the Saudi-led coalition from its annual blacklist of children’s rights violators. In his report to the Security Council, UN Secretary-General Antonio Guterres attributed 222 child deaths or injuries to the coalition in 2019, a drop from 729 the year before. The Houthis, who were deemed responsible for 313 such casualties, and Yemeni government forces, accused of 96, remained on the list.

Mwatana and the Ceasefire Center called on the United Nations to relist the coalition and refer Yemen to the International Criminal Court. Among its recommendations, it urged the warring parties to stop placing military targets near schools and put an end to practices that put students and teachers at risk.