As children pay the price of war in Yemen, there is an urgent need to quickly rebuild destroyed schools and find alternative safe havens for refugees. 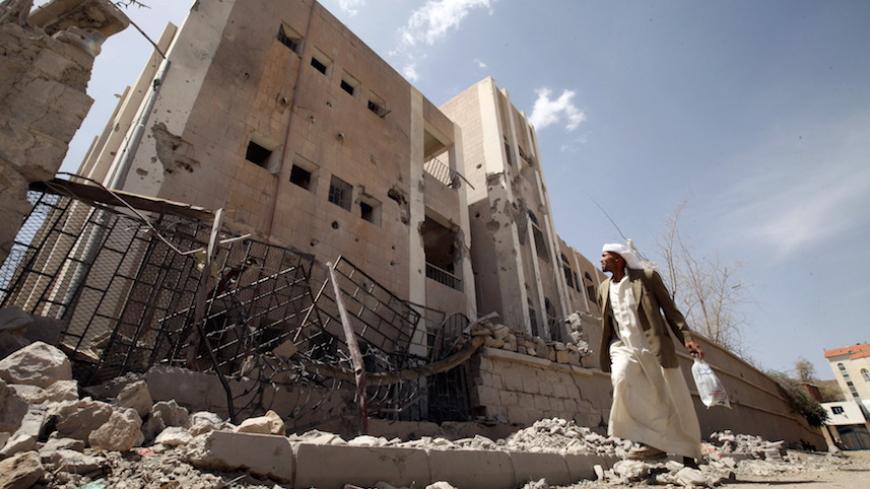 A man looks at a school destroyed by an airstrike as he flees his home in Sanaa, April 28, 2015. - REUTERS/Mohamed al-Sayaghi

SANAA, Yemen — The war in Yemen is taking a huge psychological and material toll on young students as their schools are being intentionally targeted, officials say.

Education officials there estimate the war has destroyed more than 1,300 schools, required hundreds of others to be converted into shelters and created a black market for, of all things, school supplies.

“The UN stood helpless as schools are targeted by all parties to the Yemeni conflict,” Paolo Lembo, UN resident coordinator in Yemen, said in October. “We cannot compel any of the parties to refrain from targeting schools, as imposing such a condition upon them by force is extremely difficult.”

The war has taken a terrible toll in Yemen as Houthi rebels loyal to former President Ali Abdullah Saleh and backed by Iran battle troops loyal to UN-recognized President Abed Rabbo Mansour Hadi. The Hadi troops are backed by a Saudi-led coalition of Arab troops.

The fighting, which began in late March, has damaged all levels of the education sector. The children of Yemen, numbering in the millions, are being deprived of their basic right to an education. They are suffering great mental anguish as the fighting continues unabated, accompanied by airstrikes launched by the Saudi-led coalition.

“The repercussions of the aggression waged by the Saudi-led coalition are grave, particularly upon the education sector, leading to the abrogation of given childhood rights,” Deputy Minister of Education Abdullah al-Hamidi told Al-Monitor, adding that damage inflicted on the vital sector is massive. “Hundreds of schools [have been] destroyed, while the remaining standing few were converted to shelters for refugees fleeing a number of Yemeni cities.”

He noted that “6½ million children have been affected by this war.”

Moreover, Hamidi explained that the ministry is “unable to furnish educational material due to a lack of paper used to print textbooks and the impossibility of importing such paper as a result of the siege imposed by the aggressors against our country.”

In a phenomenon seldom seen anywhere else in the world, many Yemenis are being driven to purchase their educational essentials on the black market that has emerged in the capital of Sanaa and other provincial centers. The market is driven by demand and a lack of official action against the trade of educational material.

Yet, Hamidi said there are reasons to be optimistic. Parents seem determined to uphold educational standards by encouraging their children to attend schools. Also, ministry representatives who have visited many schools in Sanaa said primary and secondary students expressed their desire to continue their studies despite the raging war.

“Armed confrontations taking place in the city between government forces and the Houthis have caused extensive damage to educational infrastructure, with 148 schools destroyed and some converted to refugee centers.”

He added, “The education sector suffered greatly in the city due to the violence of the confrontations there. Many students lost their families and are in a dire psychological state. We have also lost teachers and students who have gone off to fight.”

Mughallis explained that, for various reasons, Aden has yet to begin its school year officially, despite the ministry in Sanaa announcing otherwise. Aden’s refusal to adhere to the ministry’s set schedule could reflect the fact that, because of all the fighting, Aden has become the de facto capital of the country.

Yet, Mughallis said there is still a glimmer of hope that the education sector will regain some normalcy through the humanitarian efforts of the United Arab Emirates’ Red Crescent to rebuild what was destroyed by war. So far, 54 schools have been rebuilt, and the Emirati organization has vowed to restore all Aden’s schools.

“The city’s local inhabitants are eager to see their children return to school,” he noted.

But, he added, “There are still hurdles standing in the way of education returning to normal.” Among those challenges, Mughallis said, is the need to relocate the families forced to live in the schools when their homes were lost to war.

Like others, Mughallis emphasized that the damages of war are not limited to material losses, but extend to the psychological impact on students and teachers alike.

In that regard, Sanaa schoolteacher Abed Abdelghani told Al-Monitor, “Many families were forced to leave their homes in Sanaa and move to other areas in search of security. As a result, refugee students were compelled to adapt to new realities in the areas to which they fled. Students, predominantly children ages 7 to 10, are the segment of society most affected by this war.”

Abdelghani stressed “the urgent need for Yemen to psychologically rehabilitate its students, thus allowing them to return to school. Some have lost their fathers or other family members in addition to the [other] psychological traumas that they have endured due to the indiscriminate shelling of heavily populated areas.”