More than 2,000 schools out of 16,000 across Yemen have been destroyed by Saudi-led Arab coalition airstrikes or by internal fighting. 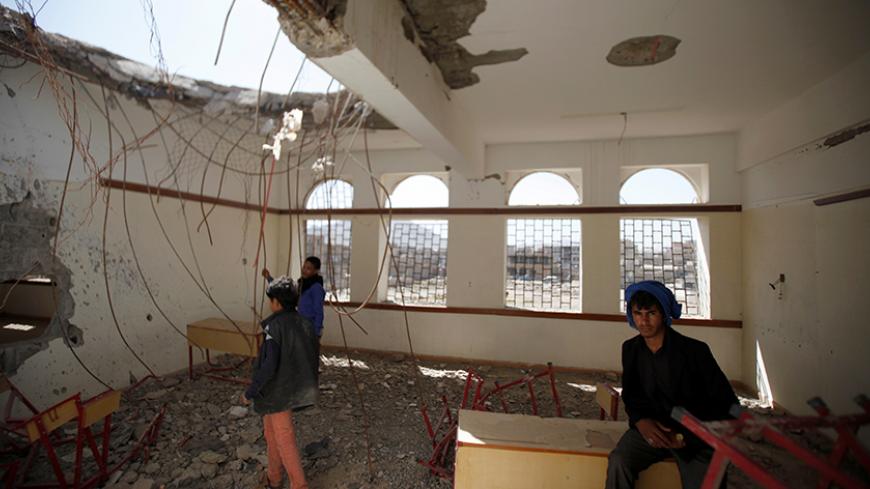 Boys are pictured in a damaged class of their school which was hit by Saudi-led air strikes last year, as schools open this week in Sanaa, Yemen Oct. 5, 2016. - REUTERS/Khaled Abdullah

SANAA, Yemen — Prior to July 2013, al-Fateh school provided primary education in the rural area of Manasseh ​​in al-Bayda governorate to the east of the capital Sanaa. But since then, the school has turned into a mere landmark of the already stumbling educational sector in Yemen.

In early July 2013, al-Qaeda gunmen occupied the school and turned it into a security center for the management of the inhabitants’ affairs. By then, al-Qaeda had been in control of large parts of al-Bayda governorate.

A schoolteacher, speaking to Al-Monitor on condition of anonymity, said, "I was shocked when a 7-year-old student approached me as I was standing in front of the school one day this year, grabbed my hand, and asked: 'Can you kick the militants out, I want to go back to school.' In that moment I felt helpless and sad more than ever.”

This school is only one of many schools in Yemen that have been transformed in military centers.

Taher al-Shalafi, the director of the Studies and Educational Media Center (SEMC) in Sanaa, told Al-Monitor that more than 2,000 schools out of the 16,000 schools in Yemen are no longer suitable to receive students for several reasons. The main reason being the destruction of school buildings following airstrikes by the Saudi-led Arab coalition, and the internal war between Houthi militants who are backed by military forces affiliated with former President Ali Abdullah Saleh on one hand, and armed groups backed by a popular resistance force affiliated with President Abed Rabbo Mansour Hadi, Yemen’s internationally recognized president, on the other.

“Based on a SEMC field report, 1.3 million out of 6 million Yemeni students have been prevented from pursuing their education during the 2015-16 academic year, representing 22% of the total number of students in Yemen — one out of five Yemeni students — while only 40% of schoolteachers were able to perform their jobs.”

Muammar al-Fahd, one of the teachers at al-Shahid al-Hinduana school in Sanaa, told Al-Monitor, “Education has hit rock bottom during the last two years and slipped to indescribable levels. This is the worst phase in the history of modern Yemen.”

He said, “The parents now buy notebooks from vendors on the streets at prices up to 400 Yemeni riyals [about $1.50 per book] while the Ministry of Education is supposed to provide these books for free to all public school students. The economic hardship and tough living conditions affect the teachers and educational workers’ performance. A teacher attends his class but his mind is preoccupied with his own family and their needs. In light of the state's inability to pay salaries things have gotten even worse.”

The economic crisis and the decision to move the headquarters of the Yemeni Central Bank from Sanaa to Aden — the temporary base of Hadi's government — has mainly affected state employees, who are now facing a blurry legitimacy and a de-facto authority unable to pay salaries.

The Central Bank, controlled by the Houthis in Sanaa, provided the necessary financial allocations for the payment of the salaries of state employees and military staff, but after the relocation decision in September these salaries were not disbursed, despite the promise of the prime minister who is affiliated with Hadi. Although the Houthis criticized the relocation decision, they remained silent regarding state employees’ salary demands.

Saleh Salami, a father of seven children enrolled in a school in a rural town in Rayma governorate in northern Yemen, told Al-Monitor that the future does not bode well in light of the prevailing chaos.

He said, “In the past, my children attended three classes per day, but currently schools are neglected, especially in rural areas. Some schools are occupied by President Hadi’s resistance forces while others have fallen in the hands of the Houthis. Some students dropped out of school to find a job while others joined armed groups. Those who stayed in school are wondering whether they should continue their education or search for a job now that their parents have lost theirs.”

The ongoing war and the deteriorating economy also took their toll on private education, as private schools registered a substantial number of dropouts during the previous academic year.

A source at the private education department with the Ministry of Education told Al-Monitor on condition of anonymity that in the 2015-16 academic year 60,000 students left private schools to enroll in public schools, out of the 300,000 private school students.

The source predicted further deterioration of private education in the current academic year, saying, “This year, the number of students who will leave private schools to enroll in public schools is expected to be higher than in previous years in light of the deterioration of the economic situation. Only students of affluent families will stay in private schools.”

Education was mostly affected in the governorates of Taiz and Hajjah, as education was completely halted in the towns of Abes and Hard near the border with Saudi Arabia. The source said, “The coalition aircraft bombed all public and private schools and education there has stopped completely since last year.”

In addition to the plunging status of the educational process in Yemen, parents fear for the safety of their children as warplanes continue to fly. On the morning of the first day of school, on Oct. 1, a large number of coalition warplanes flew over Sanaa at low altitude, sparking panic among the students.

This war seems to be an extra nail in the coffin of education in Yemen, which is already battling significant obstacles, most importantly school dropouts as a result of extreme poverty that forces students to join the labor market. A 2015 UNESCO study ranked Yemen second among Arab countries in terms of illiteracy rate, which had then reached 30%.

Add to this the phenomenon of overcrowded classrooms and the destruction of the already weakened infrastructure, which has dashed all efforts by the government to improve education. Most schools in urban areas lack adequate laboratories and libraries, while in rural areas many students are exposed to extreme heat in outdoor classrooms.