The city of Taiz, Yemen’s third largest, is living under tragedy as a result of the two-year war. 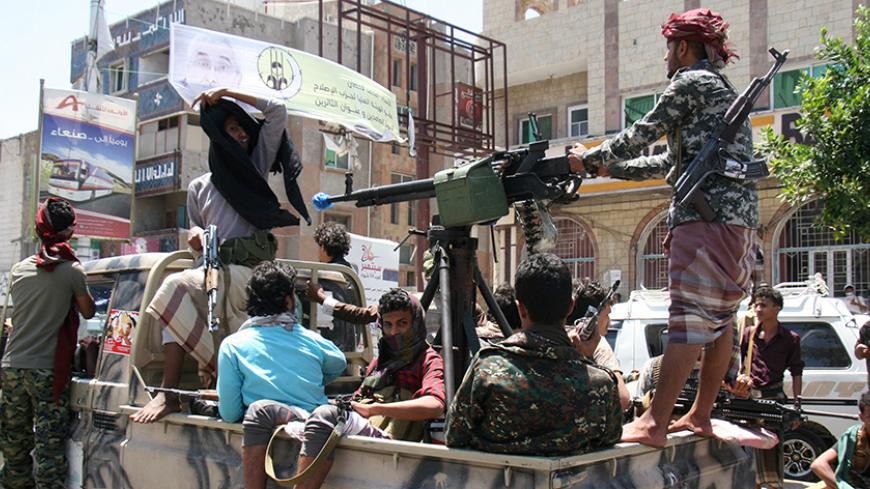 Pro-government tribal fighters patrol a street during a visit by a UN delegation to the war-torn southwestern city of Taiz, Yemen, April 9, 2017. - REUTERS/Anees Mahyoub

SANAA, Yemen — Taiz province is in crisis — a crisis that is threatening to undermine its position as the cultural capital of Yemen, as officially named by President Abed Rabbo Mansour Hadi in 2012.

Taiz has the largest number of citizens in Yemen with 2.4 million people, which makes the tragedy even worse in a country facing the risk of famine. According to the National Information Center, Taiz accounts for 12.16% of Yemen’s citizens.

Taiz is important for Yemen’s political geography as it lies in the center of the southern provinces, which are under the control of Hadi’s forces, and the north provinces, which are under the control of former President Ali Abdullah Saleh’s forces and the Houthis. In addition, its southwestern coast overlooks the strategic Bab al-Mandab Strait, which sees one-third of oil trade daily. As a result, Taiz has become central to the current conflict, and militants are increasingly interested in controlling it.

Taiz is the base of civil political work, and most political party leaders and founders hail from it. It also boasts high literacy rates among its citizens. Therefore, controlling Taiz would send out a message to other regions that the party controlling it has come a long way in dominating the country.

The inhabitants of Taiz, which is 205 kilometers (127 miles) south of Sanaa, live in a constant state of fear as a result of the civil war, which has been raging for two years now and has killed hundreds of civilians, wounded others and led to the collapse of the health system and a lack of foodstuffs.

Jalal al-Din al-Khoulani, a consultant at the United Nations Development Program, told Al-Monitor over the phone from Taiz, “Taiz has become a city ravaged by war and the Houthi blockade.”

Khoulani added, “Disease and malnutrition are threatening people’s lives. Public employees’ salaries have been cut, thus adding insult to injury, and it has been difficult to get relief aid through to the displaced and those afflicted.”

Doctors Without Borders mentioned in a statement published on their website that living conditions are going downhill in Taiz. Many people have had to leave their homes to escape the fighting and live in temporary settlements in Ibb province or camps, without access to sanitation facilities and basic needs.

Sally Adib, a rights activist who works at Mwatana Organization for Human Rights in Taiz, told Al-Monitor, “Ever since the Houthis entered and the war broke out, the city has been living a tragic situation that is only getting worse.”

She added, “The Houthis imposed an unprecedented blockade on Taiz and took advantage of their control of the city’s main ports, thus leading to a humanitarian crisis on the health, nutritional, service-related and educational levels.

Armed Houthis and other resistance factions have complicated the lives of relief organizations, which now face difficulties reaching people in need.

Said al-Salawi, a citizen from Taiz, told Al-Monitor, “What we need the most is food. Sometimes I avoid going back home when I can’t provide for my family.”

In addition to the tragic humanitarian situation due to the blockade and ongoing fights in the city between the Houthis, who are allied with Saleh, and Hadi’s forces, who are backed by the Saudi-led Arab coalition, an internal conflict between armed factions only made matters worse.

To gain more influence and militants, the armed factions gradually took over large parts of the city and worsened the security situation. These factions agree that they’re fighting the Houthis and Saleh, but they disagree on the gains and regions of control, and they do not answer to Hadi.

Many armed factions share control of the city, such as the Popular Resistance faction, al-Abbas Brigades, Hasm Battalion and al-Qaeda, among others. This has led to disputes and rampant chaos.

Unlike other Yemeni districts under the control of Hadi’s government, which has a trained army, the future of Taiz looks foggy with the armed factions’ control and the absence of official Yemeni forces or any semblance of a state.

The situation in Taiz is worsening by the day. Despite the decreasing intensity of clashes lately, armed groups are still occupying most schools. Out of 1,642 schools, 468 are out of service, and 250,000 students out of 800,000 are deprived of education.

According to figures published March 24 by the United Nations refugee agency, UNHCR, 48,000 people have been left homeless in Taiz in the past six weeks only.

The citizens of Taiz need to catch their breath. Some of them are dying from diseases that can be avoided, while hospitals are struggling amid the lack of medication. Malnutrition is on the rise, especially among children.