Is Yemen falling into an abyss? 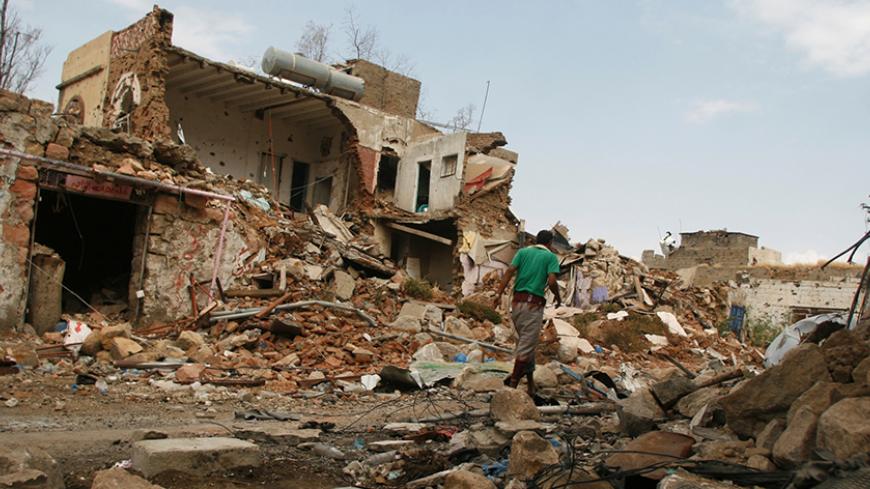 A man walks past a house destroyed during recent fighting between pro-government fighters and Houthi rebels in the southwestern city of Taiz, Yemen, Nov. 26, 2016. - REUTERS/Anees Mahyoub

Constant fighting in Yemen is crushing its people with suffering that will change the shape of their society for many years to come.

On Nov. 15, US Secretary of State John Kerry announced a cease-fire agreement between the Saudi-led coalition and the Houthi rebel group.

The cease-fire agreement only mentioned the Saudi-led coalition and the alliance between the Houthis and ousted President Ali Abdullah Saleh. It excluded the internationally recognized Yemeni government led by Abed Rabbo Mansour Hadi. The agreement included a request to Hadi’s government to participate in a unity government with the Houthi-Saleh alliance. Later the same day, Hadi’s foreign minister, Abdel-Malek al-Mekhlafi, stated that his government was “not interested" in such an agreement.

With the stagnation in the process of ending hostilities and the lack of willingness of all warring parties to engage in a peace deal, the country is at risk of falling into an abyss. Yemen has been on the United Nations' List of Least Developed Countries in the world since the list's creation in 1971. Prolonging this devastating war threatens to keep Yemen in that position for a long time to come.

Yemen has been considered a poor country for most of its modern history, but its humanitarian conditions have been at their worst since the outbreak of the conflict. The already-dismal situation there suffered a major blow when Saudi Arabia — with a 10-country coalition including the United Arab Emirates, Jordan and Morocco — intervened in March 2015 to fight Houthi territorial expansion in Yemen. The rebel group seized the capital of Sanaa in September 2014.

Saudi Arabia expected to make short work of its operation, but the fighting continues today.

Yemen entered this war as an extremely impoverished country with severe economic problems driven by decades of political chaos. Yet international organizations have worked toward establishing a sustainable humanitarian development process. All the successes of development policies in Yemen and economic reform that were introduced by the International Monetary Fund in 1996 following the civil war in 1994 have not only been dismantled during the current vicious war, but will also be difficult to restore and build on in any future postwar recovery plan.

After any destructive conflict comes a reconstruction phase; for this phase to succeed and establish a solid ground for sustainable peace, there is a crucial need for an adequate labor force. But the current humanitarian situation in Yemen draws a very bleak image of the country’s future, with its education and health sectors failing.

Yemen is unable to provide health care for a large share of the population. More than half of its health facilities are out of service or only partially functioning, leaving Yemenis to fall prey to war injuries and diseases that have been all but forgotten in the developed world, such as dengue fever and cholera. The World Health Organization said the number of cholera cases in Yemen doubled in less than two weeks, exceeding 4,000 by mid-November. In addition, the International Committee of the Red Cross estimates more than 6,000 Yemenis have lost one or more limbs during this war, adding to the number of disabled people in Yemen, which was estimated at 2 million in 2014.

Yemen's small labor force, estimated at 4.2 million people in 2013-2014, must sustain the country's 21 million people and carry the burden of reconstruction with a plan to integrate more and more people into the labor force by offering more jobs. This remains a challenge with the country's continuing brain drain and the low level of education among its labor force. About 70% of Yemen's workers have nothing more than a primary education.

Yet literacy is one sector that has improved in Yemen. In 2015, 30% of Yemen's population was illiterate — less than half the percentage reported in 1994 (63%). That compares with 2015 rates, for example, of 51% in Ethiopia and 9% in Oman. Yemen also has a big gender gap when it comes to education and even bigger issues when it comes to the quality of schools and higher education. Less than 8% of the labor force holds a university degree.

During the war, 1.8 million students were unable to go to school either because their schools were destroyed or occupied by internally displaced persons or because the students themselves became displaced or were recruited into the different warring militias. About 60,000 students had to leave private schools for public ones, indicating that the war has affected all segments of Yemeni society.

Yemeni universities have been open only intermittently during the conflict. Many teachers were imprisoned or dismissed from work by the Houthi rebel group, had to leave their jobs or the country, or were striking to protest not being paid.

Many of the country’s best-educated millennials — the engine of Yemen’s future — have been steadily leaving the country in the past five years of political unrest to look for better opportunities elsewhere. All these factors pose a great challenge to any postwar recovery plan and any progress in humanitarian development.

The road to recovery for Yemen is a long one, but it must start with a cessation of hostilities to begin to heal the devastating human cost of this war. Putting Yemen’s future first by providing better health care and working to regain the Yemeni brainpower that fled the country should be the No. 1 priority of its political elite before the damage becomes irreparable.