Is US reconsidering its support for Saudi Arabia in Yemen war?

The recent missile attacks on US vessels off Yemen’s coast as well as the limited US response suggest that Washington may be disengaging from the war in Yemen and putting pressure on Saudi Arabia to follow suit. 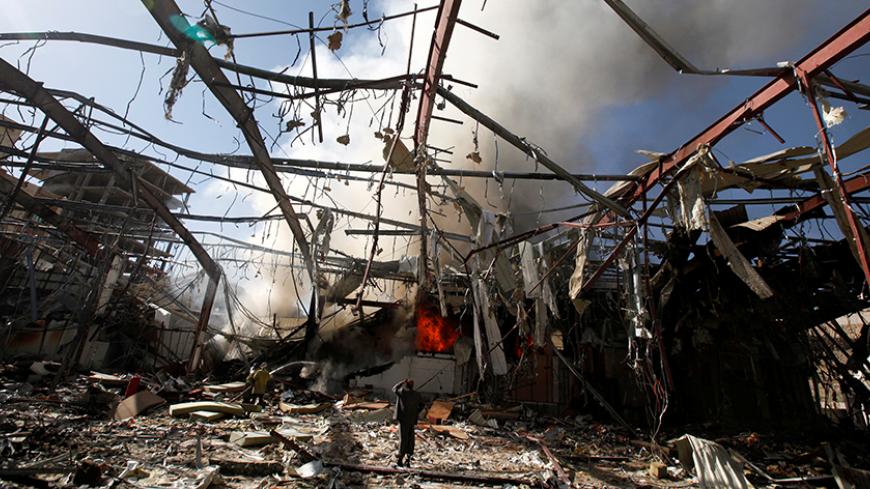 Saudi Arabia’s missile attack on a funeral hall crowded with hundreds of people in Sanaa on Oct. 8 is seen as the deadliest rocket attack on civilian targets in Yemen, killing and wounding 700 people. Meanwhile, the death toll of the war on Yemen has risen to 10,000 victims.

This deadly attack led to international condemnation, returning attention to Yemen’s war, which has been raging for more than 1½ years. Initially, Saudi Arabia tried to deny its responsibility for the attack, claiming that it was a suicide bombing, but later admitted it bombed the funeral hall based on wrong information from its Yemeni allies.

The attack not only caused shocking human casualties, but has also reduced the chances of a political settlement, as the Saudi-led campaign targeted the funeral of the father of Jalal al-Rowaishan, the interior minister in the government formed by the Houthi-Ali Abdullah Saleh alliance in Sanaa two days earlier.

The funeral was attended by top security and military leaders in the Houthi-Saleh alliance. The attack led to the death of some moderate politicians. Three officials in the UN Pacification Commission were killed, in addition to a neutral military officer, head of the Yemeni Republican Guard Ali al-Jaifi, who was likely to play an important role in the postwar period as a military leader acceptable to all parties. Abdul Qader Hilal, the mayor of Sanaa, was another consensual figure in Yemen who was among those killed.

Both former Yemeni President Saleh and Houthi rebel commander Abdullah Malik al-Houthi launched fiery speeches, calling upon tribes to mobilize and attack the Saudi-Yemeni border. Meanwhile, the families of Hilal and Rowaishan as well as the Khawlan al-Tayyal tribe to which the Rowaishan family belongs issued statements calling for peace instead of retaliatory actions.

The Saudi attack came one day after a Houthi attack targeted military leaders who support the Saudi-led coalition and the government of Abed Rabbo Mansour Hadi. Among the prominent military leaders killed was the commander in the Sirwah district of Marib province in northeast Yemen. Marib serves as the headquarters for the coalition and Yemeni forces’ military operations in the north of the country.

This may have helped prevent the coalition from taking over Sirwah, which had seemed likely Oct. 5. Taking control of Sirwah would have been a military achievement for the Saudi-led coalition with the aim of besieging Sanaa from the east.

However, the coalition forces’ march toward Sanaa from that direction is no longer possible after the funeral attack. Yemeni forces backed by the Saudi-led coalition mpw have to go through the territories between Sanaa and Marib of the Khawlan al-Tayyal tribe, which was not taking sides in the war because of split allegiances to the warring parties. However, following the funeral attack, the tribe would not allow the coalition forces through their lands, even if some of tribe's very influential members hold major commercial interests in the Gulf.

These developments come as part of the military escalation at the border front, where the coalition forces are making progress in the direction of Saada after taking over al-Bokaa area Oct. 21. For their part, the Houthis have been firing missiles toward Saudi Arabia, including one that reached the Saudi city of Taif, not to mention that they also hit an Emirati warship near the port of Aden on Oct. 1.

After the funeral attack, missiles were fired Oct. 9 from Houthi-controlled areas at a US Navy destroyer off Yemen’s southern coast. The Houthis have denied firing these missiles. Although the missile attack did not cause any damage, it seemed to be a message to provoke the United States to intervene in the war in Yemen, whether to escalate the situation or find a settlement.

The US response came Oct. 13 from a US Navy destroyer that fired a cruise missile salvo at radar sites controlled by the Houthis.

The limited US military response as well as US statements following the funeral attack suggest that America has started to reconsider its support for Saudi Arabia’s war on Yemen. In August, the United States withdrew its military advisers from Riyadh, saying that its support for Saudi Arabia is not a blank check. This suggests that the United States is likely to disengage from the war in Yemen and to pressure Saudi Arabia to follow suit.

On Oct. 16, US Secretary of State John Kerry met with his British counterpart Boris Johnson in London, where they both called for an immediate halt to the war and the start of negotiations.

Many Yemenis hoped that the bomb that was dropped on the funeral procession would draw the attention of the world to the high humanitarian cost of the forgotten war in their country. But the negotiations path remains blocked and the disparity between the two warring parties is still great, which means that Western pressure to stop fighting could be temporary, only for the war to become forgotten once again.

The military escalation started following the collapse of the negotiations in Kuwait in August after nearly three months of talks, which revealed how far the two parties were apart. As a result, each party has been seeking to improve its negotiating position through more political and military pressure.

In the last week of negotiations in Kuwait, the Houthis and Saleh announced the formation of a political council to run the areas they control and subsequently on Oct. 5 the formation of a national salvation government. In contrast, the internationally recognized Yemeni government announced Sept. 19 that the Central Bank of Yemen will be moved from Houthi-controlled Sanaa to Aden, thus depriving the Houthi-Saleh alliance of financial liquidity.

It is possible for the Houthis to rearrange their political situation in the areas they control as they are a militia that the war cannot drain military or politically. An economic blockade would have a high price at the humanitarian level, because the Houthis have depleted the state’s resources without any regard to people’s needs.

In contrast, the Saudi-led coalition has lost much of its international and regional reputation, reaping increased aversion from the Yemenis in the north, compounding the war’s expensive economic bill. Thus, any decisive military showdown seems now far-fetched. Similarly, the possibility of dividing Yemen — where the Houthis would control the north of the country — is not an option for Saudi Arabia as it is keen on arranging the political situation in such a way to be commensurate with its interest in the north of Yemen, adjacent to its southern border.

These developments have caused the economic crisis to worsen and the humanitarian situation to deteriorate in Yemen. The health sector in the country is on the verge of collapsing, while malnutrition rates are on the rise and dozens of cholera cases have been reported.

People are starting to complain about not being paid their salaries, while the general situation is going downhill in an already poverty-stricken country. This is not to mention the repeated war crimes on both sides, such as the frequent targeting of civilian sites, either at the hands of the coalition forces or the Houthis.

A UN-brokered 72-hour truce was announced Oct. 20, whereby it urges all parties to return to the negotiation table. However, these international diplomatic initiatives have proved to be toothless so far, remaining merely political endeavors without any real pressure to stop the war after more than 1½ years. As the cease-fire expired Oct. 23, air raids were renewed while famine has started gripping parts of the country.