Despite the announcement of the end of Operation Decisive Storm in Yemen, Saudi Arabia seems to have failed militarily, while Iran may have lost on the political level. 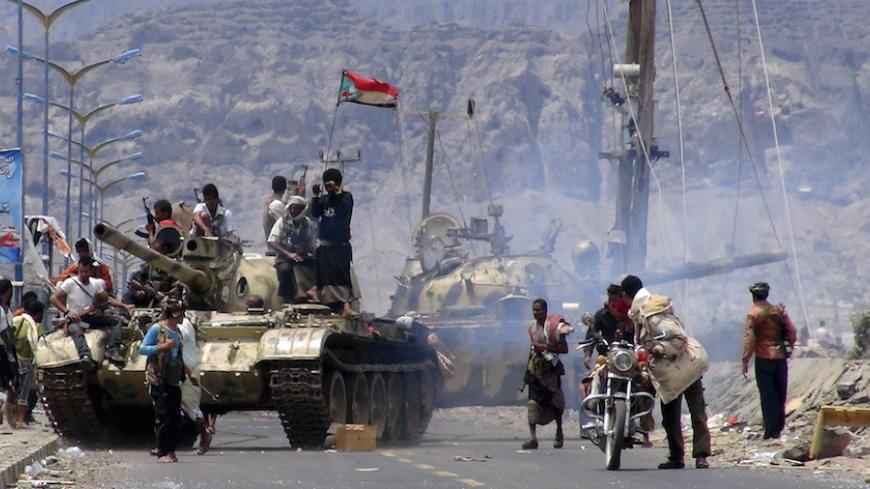 Southern Popular Resistance fighters gather on a road during fighting against Houthi fighters in Yemen's southern city of Aden, May 3, 2015. - REUTERS

As soon as Saudi Arabia declared the end of Operation Decisive Storm on April 21, all parties to the Saudi war, the Houthis and former Yemeni President Ali Abdullah Saleh, jointly declared victory on the same day, in a war where no one achieved gains, and joint losses were the name of the game.

On March 26, Saudi Arabia announced that Operation Decisive Storm aimed to restore the legitimate government in Yemen, put an end to the expansion of Houthis to the south and undermine the power of both Saleh and the Houthis. However, the government was not restored, and the Houthis and Saleh are still expanding and fighting battles in the provinces of Marib, Taiz, Aden and Dali.

On April 16, Iran and the Houthis stated that Saudi Arabia did not succeed, as the Houthis did not withdraw and the exiled government did not return to Yemen.

Yet, when Saudi Arabia announced the end of Operation Decisive Storm, it did not completely end its military operations. It instead moved on to a new operation called “Restoring Hope,” which reportedly included low-intensity military operations (when compared with Operation Decisive Storm), and left room for political negotiations. In this context, the question arises as to whether this campaign could be considered a quiet exit for the Saudi state from its impasse in Yemen.

With the start of the strikes March 26, Saudi Arabia announced its coalition (including Gulf Cooperation Council countries, as well as Egypt, Sudan, Jordan, Morocco and Pakistan) while some Saudi analysts and politicians talked about the possibility of a major ground intervention. On April 2, the spokesman for the Saudi-led coalition forces, Brig. Gen. Ahmed Asiri, said that all options are available in response to a question about a possible ground intervention in Yemen. According to a Yemeni official to Al-Monitor on condition of anonymity, a scenario for a ground intervention would include some areas, such as the coastal cities of Aden and Hodeidah, and perhaps a minor incursion toward Taiz to secure a safe return for the Yemeni government residing in Riyadh. The scenario, according to the source, is reasonable because it avoids entering Zaydi areas, such as Sanaa and its north. In the Sunni areas, the Houthi presence is rejected, which is why the potential ground intervention against the Houthis would have been easy in these areas, where the movement is not backed by local communities, unlike in the Zaydi-dominated northern areas of Sanaa, where the Houthis enjoy wide popularity.

The ground intervention scenario has been eliminated as Pakistan and Egypt refused to participate. Thus, Saudi Arabia settled for airstrikes, which cannot guarantee winning the battle, at least not in the short term.

During the first week of the operation, weapons stores were intensively targeted and the air capacities of Saleh’s and the Houthis’ militias were destroyed. Following this, and with the Pakistani and Egyptian rejection of the ground invasion, it became clear that the Saudi military operation lacked prospects, especially since the Houthi-Saleh expansion was ongoing. This led to hysterical strikes and a growing death toll among civilians, with more than 1,200 people killed, followed by a sudden stop of the operations.

Since the first moment of the operations, Saleh and the Houthis opted for military expansion in several areas so as to prevent the return of the internationally recognized government. They tightened their grip on areas such as Ibb and Sanaa, which they had originally controlled when Operation Decisive Storm started, and arrested hundreds of opponents to the Houthis overnight. The Houthis targeted their main opponent, the Sunni Islah Party, since it is the most organized opposition they may face, and arrested hundreds of the party’s members. The movement sought to stop the party from organizing and mobilizing itself.

Despite the intensive Saudi strikes, the Houthis and Saleh’s forces were able to further expand, given their internal organization; Saleh’s forces were once part of the regular army forces while Houthi forces are composed of soldiers who receive fixed salaries. These forces are facing irregular forces that include tribal members, Islamic Sunni forces (Salafists, the Muslim Brotherhood and al-Qaeda), young men from the Nasserist and Socialist parties and unemployed youths. These irregular forces are supported and armed by Saudi Arabia. Thus, the qualitative difference in arms between the opposing groups decreased.

The time factor has placed pressure on Saleh and the Houthi movement, as both are running out of ​​time as they wage battles in areas that are distant from their support and logistics bases, especially in the north. Moreover, roads between the north and the rest of Yemen have been bombed, and weapons are running out amid no Iranian supplies and the widespread Saudi destruction of their weapons stores. At the end of the day, they are fighting in areas where they lack social support, unlike the forces supported by Saudi Arabia.

The military forces fighting the Houthis are also running out of time given their irregular nature. These forces suffer from exhaustion and face increased chances of chaos within their ranks. Saudi Arabia is besieging Yemen from the air, sea and land to stop weapons from being supplied to the Houthis and Saleh. Saudi Arabia has also banned bank wire transfers to avoid foreign funding. This complete siege on Yemen is contributing to the harsh human conditions in the country. It also explains the increasing international pressure on Saudi Arabia to alleviate the siege, which is costly for all Yemeni citizens, be they fighters or not.

Iran did not earn anything in the war in Yemen. It has lost all of its alliances in the nonsectarian Yemen. The network of alliances it has built in Taiz and the south has completely collapsed. Chief among these is the alliance in the south with prominent southern leader Ali Salim al-Beidh, who announced his support for Operation Decisive Storm in line with the position of the southerners, albeit at the expense of his ally Iran. Iran now has to settle for one party, the Houthis, who will remain its ally, despite all of its expansion attempts.

Iran has lost diplomatically and politically while Saudi Arabia succeeded with the passing of UN Resolution 2216, which was issued in favor of its military intervention. Saudi Arabia was able to neutralize Russia and bring down its project, which aimed at seeking equality between the Houthis and Saleh on the one hand, and the Saudi-supported military forces on the other. Add to this the replacement of UN envoy Jamal Benomar with Mauritanian Ismail Ould Cheikh Ahmed, who is backed by Gulf countries. This conveys, among other things, direct UN recognition for the Gulf to directly take over the Yemen issue. It also conveys that the Gulf countries were not happy with Benomar, who held British citizenship and had the support of the British Embassy.

Saudi Arabia enjoyed wide international political support, as seen when a US warship stopped an Iranian ship loaded with weapons near the coast of Yemen on April 20. Russia also stopped opposing the Saudi strikes. This means that the world recognizes Yemen as a region under Saudi Arabia's influence and believes that Iran is not entitled to manipulate it, especially since it supports a militia, not the authorities of a country, as is the case in Syria. Moreover, this militia staged a coup, as per a Feb. 7 statement of UN Secretary-General Ban Ki-moon.

Iran suggested a proposal on April 14 for a settlement of the Yemen crisis, proposing an end to the strikes and the commencing of negotiations between the Yemeni parties. But the Iranian proposal did not receive international attention, and it was obviously rejected by Saudi Arabia, which stated as a condition the withdrawal of the Houthis and Saleh from Yemeni cities, as stipulated in the first item of UN Resolution 2216.

Operation Decisive Storm has resulted in collective losses. Saudi Arabia has failed militarily, Iran politically, while the military capacity of the Houthis and Saleh dwindled and prevented them from exercising absolute control on the ground. However, Yemen as a country has lost the most, as it entered the cycle of civil war and witnessed widespread destruction as a result of Saudi bombing and Houthi expansion. On top of this, the damage inflicted to the Yemenis will not be repaired any time soon.

Saudi Arabia is looking for a way to get out of the military impasse, while Iran is seeking to use the political situation to its advantage. Meanwhile, a political settlement remains hard to reach in Yemen, as the state institutions collapsed and social conditions have deteriorated as a result of the civil war.