The complexities of the Yemeni state will stand in the way of a political settlement that might result from the military intervention launched by Saudi Arabia against the Houthis in Yemen. 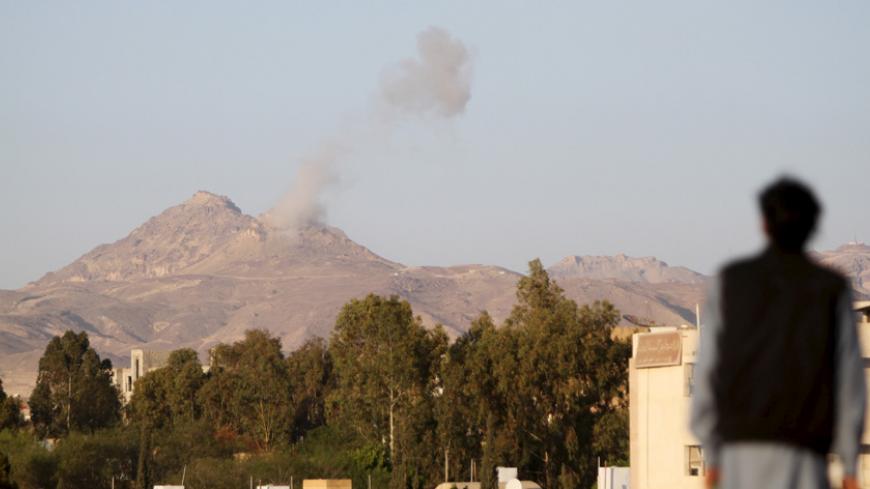 A man looks on as smoke billows from military barracks in the Jebel Jemima mountain area following an airstrike near Sanaa, March 30, 2015.

Ever since the fall of the Yemeni capital, Sanaa, in September 2014 in the hands of the Houthis, Yemen has been fighting a regional conflict while its political situation has reached a deadlock; the head of state and the prime minister resigned Jan. 22 amid complete failure to reach a domestic settlement as the Houthis continue to expand militarily.

Yemen has turned into an arena of armed military operations for a broad alliance of 10 countries, which includes all the Gulf states except Oman, as well as Jordan, Egypt, Sudan, Morocco and Pakistan. This reveals that there are deep concerns over Iran’s expansion and raises the question as to whether such concerns are justified.

The issue has several dimensions. Chief among these is the Houthis’ recklessness in dealing with Saudi Arabia and its interests in Yemen, as the Houthis did not try to assuage Saudis' concerns, and even went so far as to enable Iran to do vital things in Yemen; for example, the Houthis handed over the port of Hodeidah on March 13 — the second-largest port in Yemen — to an Iranian company. The Houthis moved to the stage of provocation through military maneuvers on the Saudi border March 12, amid statements by high-ranking anti-Saudi figures who bragged about an imminent invasion of Riyadh. Ultimately, the Houthis refused any Saudi calls for dialogue in Riyadh and then Doha, the last of which was made just a week before the Saudi attack against Yemen.

The second dimension is the power struggle within Saudi Arabia after the death of King Abdullah bin Abdul-Aziz Al Saud on Jan. 25. This was obvious in Hezbollah Secretary-General Hassan Nasrallah’s speech March 27 about the strike against Yemen, whereby he referred to attempts by the Houthis to communicate with Saudi Arabia for reassurance purposes. These attempts, however, were cut off after the new leadership took rule in Saudi Arabia.

The current Saudi minister of defense, Mohammed bin Salman, who is in his 30s, is strengthening his position through the war that he is leading, as a potential heir to his father, King Salman bin Abdul-Aziz Al Saud.

The first line of the late King Abdul-Aziz's sons is now ending — with the last two being King Salman, 79, and his half-brother Crown Prince Muqrin, 69 — which requires moving to the next generation of the royal family. Thus, the grandchildren of Abdul-Aziz — the founder of modern Saudi Arabia who died in 1953 — are the next heirs to the throne.

The third dimension is a fault in Iranian calculations, which relied on a wild ally, the Houthis, whose emergence was very sudden. This sudden emergence is not a sign of a real strength, but the result of temporary political conditions that are greatly linked to a temporary ally, namely former President Ali Abdullah Saleh. Iran did not try to calm the Houthis’ military defiance, and it wrongfully thought that Saleh could impose his authority on Yemen by force. Based on Iranian analysts and politicians, there is a clear ignorance of the size of the political and social complexities plaguing Yemen.

Iran, which is eager to build a new influence in Yemen, disregarded the fact that Saudi Arabia’s influence is the result of many years of work. It is also the fruit of several tools, with weapons and religion not chief among them. Iran, however, abrasively entered Yemen without the presence of any soft power, while all Saudi interventions that were keen on weakening the Yemeni state depended on several smooth and rough tools. Saudi Arabia’s most prominent soft tool was perhaps the kingdom's hosting of a Yemeni community of nearly 2 million people over many decades. This has had a significant economic and cultural impact on the Yemenis.

However, Saudi influence within Yemen has been far from absolute despite all the Saudi funds; Saudi Arabia has lost several times in Yemen. In the 1960s, Saudi Arabia supported the royal imami regime, but the republicans ended up winning. Saudi Arabia subsequently supported the Yemeni Socialist Party's secession demands in 1994, but the other side ended up winning. A panoply of other examples — such as the emergence of a communist republic in the south (1970-90) and Yemen’s support for Iraq during the occupation of Kuwait — reveal that the issue of absolute Saudi influence is but an illusion in a complex country such as Yemen, where money can only lease, but not buy, parties and figures. In other words, loyalties and the balance of power are always fickle.

Iranians have been widely misled by their allies, who told them that the Zaydi imamate ruled Yemen for 1,000 years, and that the imamate’s political legacy can be revived. This is a common historical mistake. The imamate ruled during intervals, the most recent of which was between 1914 and 1962, which marked the fall of the imami regime. From 1962 to 1968, a civil war erupted in Yemen, as the republicans were supported by Egypt, while the royalists were backed by Saudi Arabia. This imami regime left behind historic feuds that are still recalled by local communities that fear any return of that regime. Many tribes were fighting against imamate rule in the 1960s, such as the tribes of al-Bayda province and the Hodeidah tribes.

Also, the 2011 revolution took place in a bid to overthrow the regime that the Yemenis opposed, as its regional background is associated with northern Sanaa, namely the Zaydi areas, which monopolized power in Yemen. This is explained by the widespread popular movement witnessed since the fall of Sanaa on Sept. 21, 2014, in Yemen governorates against the Houthis, including such authentically Zaydi provinces as Dhamar.

The Houthis’ reliance on Yemeni hatred toward Saudi Arabia — which opposed the Yemeni revolutions in 1962 and 2011, as well as Yemeni unity in 1990, and Yemeni aspirations for change and for building a strong state — was not enough 10 months into the continuous fighting, starting with the Amran conflict, against the Yemenis. The latest battle development was the Houthis’ announcement of general mobilization to invade southern provinces.

Moreover, Houthi leader Abdul-Malik al-Houthi’s anti-corruption populist slogans (in December 2014) that attacked power centers failed to attract many people, given their exclusionary and repressive attitude against the Yemenis. Many Yemenis started voicing fears that go beyond foreign intervention, especially as the Houthis did not hesitate to use weapons against Yemenis to enter Yemeni cities. Al-Bayda province is an example of that. Therefore, public support for the current Saudi military intervention in some southern and eastern provinces was indeed large.

Through military raids, Saudi Arabia is seeking to destroy Saleh’s power as it holds a personal grudge against Saleh after he turned against it — Saudi Arabia hosted him for three months following the assassination attempt in 2011 — and allied with the Houthis. This is the most realistic reason because airstrikes cannot completely derail a militia force similar to the Houthis. They have nothing to lose. Moreover, the Houthis believes that their mere survival is a victory. The attack will only manage to strip it of its excessive power and return it to being a militia with a limited military force. The strikes are in fact a campaign targeting the Yemeni army with all its camps and weapons, and the United States has enough intelligence information about it.

The decisive factor for the military intervention was the Houthis’ disregard for all international warnings against expanding toward the southern provinces and controlling Bab al-Mandab. This denied the Houthis any international cover, as even Iran will not be able to defend them alone for long.

Therefore, the military and political results of the battle are settled in favor of the strongest party, i.e., Saudi Arabia and the alliance it is leading. The kingdom is confronting the Yemeni army, which includes Saleh’s military forces and Houthi military forces, which are both weaker than those of Saudi Arabia. The Saleh-Houthi forces do not enjoy any popular support outside Sanaa and in the far north of Yemen, while the majority of Yemenis back the Saudi military strikes, namely in the southern and eastern provinces. In contrast, Saudi Arabia enjoys broad international support for its military intervention in Yemen.

However, this operation is very costly for Yemen at a political and human level. The intervention will result in the destruction of the regular military force, which would impose a chaotic political reality in the absence of any military force likely to impose its authority, as well as with the presence of the Houthis in the north. This militia remains the most trained and organized, and there is a nucleus of a tribal militia in Marib, along with another nucleus of popular militias in Aden, which will create massive political chaos in Yemen.

Political chaos in a country that stretches along half a million square kilometers and is inhabited by roughly 25 million people, resulting from the destruction of infrastructure and the killing of many civilians in violent raids, will drain Saudi Arabia post-battle, as Iran will still be able to find new areas of intervention in Yemen and get Saudi Arabia in consecutive whirlwinds.

The military results of Operation Decisive Storm are settled militarily, but politically there will be no winners, neither internally nor externally. The battle will set the stage for a long-term state of chaos in Yemen — a country with myriad problems and complexities.