Saudi Arabia's war on Houthis in Yemen is key to rallying the domestic Saudi populace after the regime's repeated failures to obtain a victory over Iran. 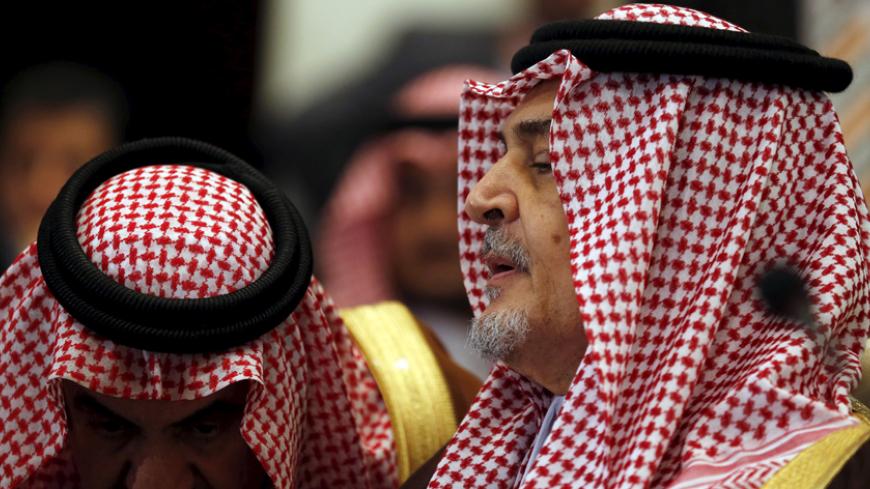 The Saudi war on the Shiite Houthis in Yemen and deposed President Ali Abdullah Saleh united both a competitive royal family, plagued by hidden rivalries, and a divided nation. On March 26, Saudi Arabia launched airstrikes on Yemen after obtaining the support of all Gulf Cooperation Council (GCC) countries, with the exception of Oman, to back military action. Hours after the strikes, the Saudis announced that other Arab countries, including Egypt and Morocco, and Pakistan would join the military effort to halt the Houthi expansion toward Aden and return elected Yemeni President Abed Rabbo Mansour Hadi to his seat in Sanaa, now under the control of the Houthis. Washington gave its blessing and the Saudis announced that a joint operations room was set up to oversee airstrikes.

Saudi Arabia is pursuing an aggressive military interventionist policy in the Arabian Peninsula. Its first attempt was in 2011, when about 1,000 troops moved into Bahrain under the umbrella of the GCC Desert Shield to support the Al-Khalifa rulers against a peaceful uprising, inspired by the wave of protests in the Arab world.

In 2009, Saudi jets participated in Saleh’s war against the Houthis, one of the six wars the deposed president started against his rivals in the north of the country. The Houthis retaliated and crossed Saudi borders, where they held a small village for several days. They later retreated to the safety of their mountain villages around Saada. At the time, the episode was celebrated as a victory for Saleh and his backers, Saudi King Abdullah bin Abdul-Aziz and his minister of defense, Prince Khalid bin Sultan.

There is more to the Saudi military intervention than halting Iranian expansion at its southern border, blocking Shiite Houthi empowerment or obtaining revenge against Saleh, who had been guaranteed immunity under the GCC Yemeni Accord but turned against his patrons in Riyadh and allied himself with their archenemy in his own country to regain power in Sanaa.

King Salman bin Abdul-Aziz Al Saud is in charge, and his defense minister and head of the royal court, his young son Mohammed, is determined to establish Saudi Arabia as the policing agency of the Arabian Peninsula. His son, an inexperienced graduate of the local King Saud University in Riyadh, is overseeing the operations. His mother is from the strong Ajman tribe. He's a true local, untarnished by outside corrupting influences, and is presented as the new bridge with traditional constituencies in Saudi Arabia. His youth must have endeared him to his father, as the elderly tend to have a certain affinity toward their youngest child. Perhaps such fathers see in these latecomers a reminder of their virility and potency, which have gradually eroded with old age. This is not to mention the development of a special trust and affinity toward a young man, who may not be seen as being in competition with the father. Such sentiments may not be easily maintained with an eldest hawkish son with ambitions of his own. Mohammed’s credentials are yet to be established in an external war that is still ambiguous, dangerous and perhaps catastrophic for both Yemen and Riyadh.

Mohammed is determined to achieve military success to stand on equal footing with his cousin, Prince Mohammed bin Naif, who established his credentials as the security man of Riyadh by fighting local terrorism and expelling terrorists to Yemen, where al-Qaeda in the Arabian Peninsula had established its headquarters. Salman promoted his young son at the expense of more experienced individuals. For example, Oxford graduate Faisal was sent to Medina to serve as governor, while other sons were placed in charge of tourism, oil and other less spectacular government bureaus.

Like his cousin Khalid bin Sultan, who earned the title "Desert Warrior" for his participation in the 1991 Gulf War to liberate Kuwait, Mohammed needs to earn a military title, perhaps "Destroyer of Shiite Rejectionists and their Persian Backers in Yemen," to remain relevant among more experienced and aspiring siblings and disgruntled royal cousins. Notable among this group are his older, more credentialed half-brothers. Faisal could have been appointed foreign minister, given his education in international relations and his knowledge of Saudi-Iranian relations. Yet, Salman is still holding on to Saud al-Faisal, who has been foreign minister since 1975.

Perhaps Mohammed bin Salman is expected to deliver the heads of several Houthis, notably the sons of the scholar Badr al-Din al-Houthi, who are now in charge of the rebellion. It was reported that a young Houthi son named Abdullah had already been killed during the first hours of the Saudi airstrikes. The Houthi sons are not new to assassinations, as several of their ancestors have been targeted in the past. Yet the rebellion continued, and this armed Shiite-Zaydi clan did not give up its quest for power-sharing and equitable distribution of economic sources from the central Yemeni government. Their northern province remains one of the most destitute regions in a poor country. Previous Saudi airstrikes further contributed to the impoverishment of the region, and they are bound to aggravate the situation now.

Besides settling the rivalry between various royal figures with a military victory over the Houthis, the Saudi military intervention promises to unite a divided and apprehensive nation. Saudis are ideologically divided on domestic affairs and their government’s counter-revolutionary tactics in the past five years. So-called liberal Saudis want the government to control conservative religious constituencies and grant them more personal freedoms, from lifting the ban on women’s driving to abolishing the religious police. At the other end of the spectrum, the majority of Islamists want more Islamization, under the quest to remain faithful to the Saudi-Wahhabi pact of the 18th century, in which the Al Saud clan swore to keep the flames of Islam ignited inside Saudi Arabia and beyond its borders.

The Islamists, who have demanded more civil and political rights, an elected government in a constitutional monarchy and accountability, have been put behind bars. There is no sign that they will be released under the Saudi monarch. Such internal divisions have persisted and even became more obvious with the mass protests sweeping the Arab world. They all, however, aspired toward defeating Iran and thwarting its expansion toward Arab lands. They were all disappointed with the unsuccessful efforts of the Saudi regime to depose Bashar al-Assad of Syria. The Saudi regime’s failure to score a victory over Iran, coupled with the US-Iranian rapprochement over the Iran’s nuclear program, is interpreted as a serious Saudi defeat. Hence, the war on Yemen promises to nourish an aggressive and unifying hyper-nationalism, at least in the short term.

Within minutes of the Saudi airstrikes, Saudis began their usual hashtag activism under the moniker Asifat al-Hazm (Operation Decisive Storm). Social media users expressed their support of the new young defense minister by posting photos of him conducting war efforts like a NATO general from the high-tech military operations room. This was a celebration of the new king and his son, both of whom are required to persist in their unwavering efforts to thwart the Shiite and Iranian expansion on the southern edge of the Arabian Peninsula.

The war is seen as a revival of the Muslim duty — in particular, the Saudi duty — to purify religion from the "Majus" (a pejorative term for Persians), the Safavids and the heretic Shiites. Less racist and religiously bigoted opinions invoked Arab nationalism to defend the Arab identity of Yemen. There is no room for dissenting opinions, as opponents of the war, or even those who question the war's logic, are labeled traitors against the nation and religion. Suddenly, Saudis were able to unite over a controversial intervention in a domestic Yemeni conflict. Saudis seemed desperate for a war with Iran, albeit through a Houthi proxy. As long as this war remains confined to Yemen's rugged mountains and destitute cities, and so long as it does not spill over to southern Saudi Arabia, Saudis are happy to witness the destruction on their screens and Twitter accounts.

The war on Yemen may well be what Saudis — both commoners and royalty — have wanted for a long time. A victory over the Houthis is important for domestic reasons, not least to mend internal Saudi divides, but also to save the Saudi leadership from embarrassment over its complete failure to score victory over Iran in Syria and Iraq, and over Washington’s new policy to mend its ties with Iran and possibly lift sanctions.

The orchestra is beating the drums of war but whether this war is in the interest of the warring Yemeni factions or is going to deliver peace in Yemen remains to be seen.