The new Saudi king has united the Arabs against the Houthis, with Qatar and Egypt now on the same side. 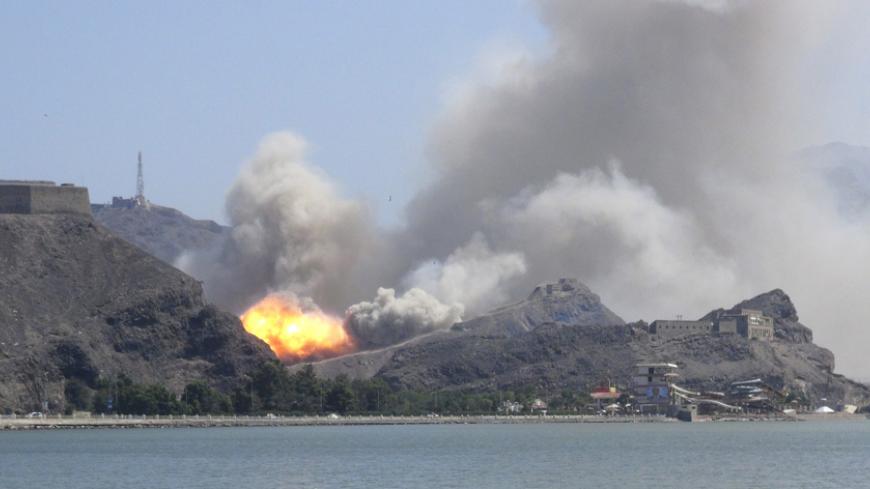 SANAA, Yemen — On March 25, tribal gunmen loyal to Yemen's Houthis, along with Yemeni military forces, tightened their siege on the southern city of Aden, which President Abed Rabbo Mansour Hadi declared as a temporary capital after he fled there from Sanaa more than six weeks ago.

Two weeks earlier, Houthi gunmen, in conjunction with some Yemeni army units, conducted a military exercise in Saada province on Saudi Arabia's southern border. These Houthi activities may have been the direct cause of the largest-ever bombing campaign against Yemen, which has not fought a war with another country in 80 years. Ongoing internal wars, however, have torn Yemen apart — including the current one between Hadi's forces and the Houthis; al-Qaeda in the Arabian Peninsula (AQAP) and the army; and the six wars between 2004 and 2009 in Saada between the Houthis and the government. Yet, March 26 was a defining moment in Yemen’s modern history, as Sanaa residents woke up to the sounds of continuing airstrikes.

The Houthi threat against Saudi Arabia has increased. Saudi Arabia considers the Houthis an extension of its traditional foe, Iran. Yemen’s legitimate president became trapped in Aden after escaping from a monthlong house arrest imposed by the Houthis, who surrounded his house in Sanaa. He escaped Feb. 21, the third anniversary of the referendum that made him president. If Aden falls into the hands of Ansar Allah, the Houthis would effectively tighten their control over the country’s key locations, especially Aden's international airport and the Bab al-Mandeb strait. The fall of Aden is considered a threat to one of the largest oil routes in the world and would affect the global oil economy.

The Houthis' military progress from their northern stronghold has been an unprecedented source of concern for Riyadh since mid-2014. That concern culminated in September 2014, when the Houthis tightened their grip on Sanaa, whereby the army and security establishments came under their direct control.

On March 21, high-ranking Saudi security officials met with representatives from other Gulf countries in Saudi Arabia. This meeting seems to have put the finishing touches on a secret operation being prepared against Yemen. This meeting took place nearly two weeks after the Houthis, in conjunction with pro-Houthi army units, conducted a military exercise with live ammunition and heavy weapons on Saudi Arabia’s border.

The Saudi-led military operation against the Houthis in Yemen, known as Operation Decisive Storm, started by bombing quality targets that paralyzed Yemeni air defenses. About 185 modern military aircraft, mostly Saudi Arabian, destroyed military targets, most notably the air bases of al-Dailami and al-Adan. They also destroyed weapons stores in Sanaa and Saada, as well as camps for special forces and reserve forces loyal to former President Ali Abdullah Saleh located west and south of the capital. Meanwhile, Hadi headed to the 26th Arab League summit in Sharm el-Sheikh, Egypt on March 28. He traveled by road to Oman, and then to Riyadh, which is sponsoring his return to power by using US F-16 jets.

Hadi gave a speech to Arab leaders, urging them to keep bombarding the Houthis, whom he described as puppets in Tehran’s hands. That was in response to Houthi leader Abdul-Malik al-Houthi calling Hadi a puppet in the hands of Saudi Arabia and the United States. The summit provided an Arab League umbrella for Operation Decisive Storm, according to the joint defense agreement and Article 51 of Chapter VII of the UN Charter, both of which authorize the international community to militarily intervene in member states.

At the beginning of the airstrikes, Houthi gave a speech in which he offered no concessions and showed no fear of the consequences of Saudi Arabia’s airstrikes. He called for the formation of domestic fronts to fight the “American-Zionist aggression,” as he described it. His troops are moving southward and engaging in street fighting in Dalea, Lahij and Aden.

Never before has an Arab military alliance been formed under the umbrella of the Arab League against another Arab country. However, it seems that Saudi King Salman bin Abdul-Aziz Al Saud is trying a different approach than his predecessor King Abdullah, both toward Yemen and other Gulf states. For example, Salman was able to bring Qatar back into the lineup in relation to Yemen. Qatar is now on the same side as Abdel Fattah al-Sisi's regime in Egypt, a regime that Qatar described as taking power through a coup. Perhaps the states participating in Operation Decisive Storm prepared their operation before the Houthis besieged Aden, bombed the presidential palace, conducted maneuvers on the border with Saudi Arabia or even activated the air supplies agreement with Tehran, an agreement that stirred controversy in late February.

Yemeni political parties are remarkably silent. The external intervention in Yemen is a sensitive subject. Only the General People’s Congress and Ansar Allah have opposed the operation. The military wings of these two groups, not their political wings, are officially targets of the airstrikes. Other forces at odds with the Houthis — unfriendly parties like the Muslim Brotherhood, and those who stormed their headquarters and arrested their members — have not publicly opposed or welcomed the airstrikes.

The Yemeni street is practically split between supporters and opponents of the airstrikes. While the majority of Yemenis would agree that the Houthis’ actions and behavior have been problematic for Yemen, they are split on whether foreign intervention is the best way to address the issue.

Ansar Allah’s opponents see the coalition strikes as a way to discipline Ansar Allah, which has been bullying its political partners and Yemenis by never committing to agreed-upon peace deals. Their numbers increase as we move from the center to the south of the country. Ansar Allah’s supporters believe that this external interference must be opposed, regardless of one’s position toward the Houthis, since external interference targets all of Yemen, not just Ansar Allah. This current will most likely grow if the strikes intensify or if they hit civilian targets, as happened in al-Marzaq camp, where an air raid the evening of March 30 killed more than 40 civilians and wounded dozens.

Until now, no clear timeline exists for the strikes on Yemen. And the Houthis do not seem willing to leave Aden. These two facts portend a civil war that may last for decades.

On March 30, the UN High Commissioner for Refugees in Somalia announced the arrival of the first batch of Yemeni refugees fleeing the war. This is an alarming indicator about what the war may do to the Yemenis in the coming days.